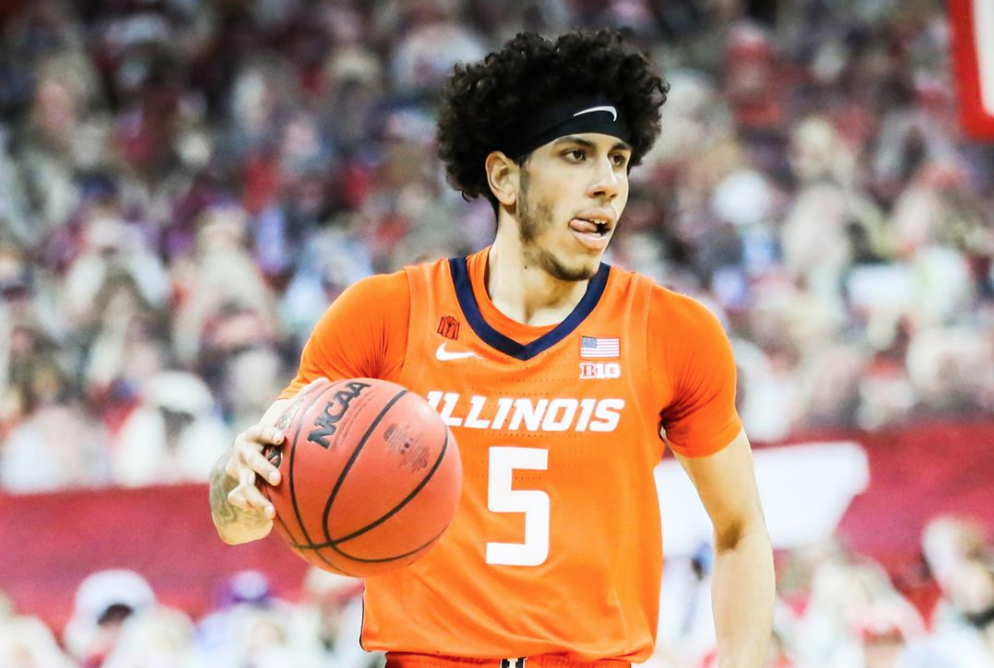 Illinois basketball returns a behemoth star in Kofi Cockburn. His new running mate, guard Andre Curbelo, could be set for a major breakout.

Illinois basketball returned to national prominence last season for the first time since Deron Williams and Dee Brown were in Champaign. Even though the Illini were ousted on the opening weekend of the 2021 NCAA Tournament, they finished the year ranked at No. 4 on KenPom. Head coach Brad Underwood has taken the program close to its prior glory in just a few years, and the future remains bright.

Most notably, Kofi Cockburn is back as Illinois’ star big man after initially testing the NBA Draft waters. Fellow upperclassmen Trent Frazier, Da’Monte Williams and Jacob Grandison also figure to see major roles in their returns. The big problem that needs to be accounted for, though, is that Ayo Dosunmu is not walking through the door anymore – nor is his widely-expected heir, Adam Miller.

While not the go-to late-game killer that Dosunmu was – nor is he the same kind of deep threat as Miller – Curbelo is a crafty point guard that should see a massive increase in his role this season. He was already named to the Big Ten’s All-Freshman Team last season while also taking home Sixth Man of the Year honors. Now set to start at point guard, this is his team to manage. Cockburn is the star, but Curbelo is going to be one of the top table-setters in America.

As Illinois basketball looks to embark on another season, let’s take a dive into Curbelo’s game to analyze what exactly he brings to the table. How can he be the difference-maker to keep the Illini in the national spotlight?

There are not many playmakers as crafty as Curbelo in the country – he has some Hogwarts-worthy magic. His impact as a creator is undeniable, and he also has the ability to make high-quality reads at speed and dish live-ball passes on-target. While he displayed some turnover issues last year, he now has a full year of experience under his belt. Curbelo’s playmaking chops are not something to underestimate; his passing is a game-changing skill.

Even as a true freshman, Curbelo led the Big Ten in assist rate last season at 38.9 percent. His 4.2 assists per game ranked 12th among all freshmen in the country. That number should increase with more responsibility on his shoulders in 2021-22.

It is also important to note that his turnover woes improved as his freshman season progressed. He became much more comfortable with the speed of the game and adapted to make more informed decisions.

Curbelo finished 10 games with a turnover rate under 20 percent during his freshman season; five of those came in his final seven games of the year. During those seven games, he dished out 29 assists to just 14 turnovers.

Boasting an elite playmaker is only one part of generating a highly efficient offense. In order to optimize Curbelo, Illinois needs to surrounded him with teammates that can take advantage of his passing. Thankfully, the team has done exactly that, even with the departures of Dosunmu and Miller. Curbelo is not the “star” of this team, but he will be the offensive hub and focal point.

First and foremost, Kofi Cockburn is a superb pick-and-roll partner. While not a floor-stretcher, Cockburn is a monster inside. His muscular 7-foot, 285-pound frame looks as though moons should orbit around him. The star averaged 17.7 points and 9.5 rebounds per game last season on 65.4 percent shooting. He is as physically imposing and interiorly dominant as any college basketball player in recent memory.

The rest of Illinois’ rotation is then filled with 3-point shooters that will generate scoring balance. Curbelo and Cockburn will be on the frontlines, but these snipers will provide the support they need to be an elite offense:

Alfonso Plummer has a good chance to be one of the nation’s most undervalued additions for this season. The former Utah guard is an absolute gem of a shooter. Not only does he have essentially no conscience with his shot selection, but he is deadly accurate. Plummer shot 114-for-286 (39.9 percent) from deep in two seasons with the Utes.

This chart above also does not mention incoming freshmen Luke Goode (6-7) and Brandin Podziemski (6-5). Both are big guards with strong reputations as perimeter shooters. Goode shot 38.5 percent from three for Homestead (IN) last season while Podziemski won Wisconsin’s Mr. Basketball behind 45.6 percent 3-point shooting.

Finishing: So Fresh, So Clean

Curbelo’s playmaking is easily his best skill, but he will have to carry more of a scoring burden as a sophomore. Although he was a non-threat from 3-point range last year (5-for-31, 16.1 percent), he made defenses look silly with his burst and finishing ability.

There were 83 players in college basketball last season that measured in at 6-4 or shorter and attempted 100 shots at the rim. Curbelo, 6-1, was among them and his 66.04 percent efficiency on those attempts ranked *fifth* among the group. He was also the only freshman in the top nine. Inch-for-inch, Curbelo is one of the best finishers in the entire nation:

He wasn’t just a finesse finisher, either. Curbelo drew 4.4 fouls per 40 minutes last season – a mark that ranked 426th in the nation – and exhibited the third-best free-throw rate (37.0 percent) on the team. Only Cockburn and Williams exhibited higher rates among the eight Illini that played greater than 15 percent of the team’s total minutes. Curbelo was able to create and play through contact.

Getting to the line is not the only piece of the puzzle, though. He was also relatively efficient on those attempts, shooting 59-for-81 (72.8 percent) at the stripe. This conversion rate also provides for the possibility that his range could expand to include more accurate 3-point shooting. Overall, he averaged 9.1 points per game.

Scoring will admittedly be a bit more challenging this season in the absence of Dosunmu. Curbelo will garner more defensive attention and he will need to adapt to that role. If he is able to do that, and perhaps even show more efficiency from three, he could be set for a massive breakout campaign. Stat. Sheet. Stuffer.

Defensive impact of the Fraziers

With Curbelo initiating the offense, Illinois is likely to be a highly efficient scoring unit. He gets to his spots at such a consistent rate while putting pressure on defenses with his combination of finishing and playmaking. Defensively, though, there is room for Curbelo to improve. Using defensive stats is a sketchy business, but Curbelo’s numbers on that end were not complimentary.

Illinois basketball was one of the best defensive teams in the country last season, but Curbelo ranked near the bottom of the rotation in most defensive-oriented statistics. The eye test also backed up the idea that he was not a top-level defender as a freshman – even with the team’s top steal rate (2.4 percent, 480th nationally).

Looking ahead to this season, though, there are a few reasons to expect improvement. First and foremost, he has a year of experience under his belt. It is difficult to succeed defensively as a true freshman, particularly in a league as jam-packed with talent as the Big Ten. He also gave plenty of effort defensively during his first season; motor was not a problem.

Additionally, he will be surrounded by a pair of excellent defensive minds. Starting with backcourt running mate, Trent Frazier is one of the best on-ball defenders in the nation. He was named to the Big Ten’s All-Defensive team last season. Trent can not only help set an example but also cover up some of Curbelo’s weaknesses as they share the floor together.

The 6-2 senior is not the only “Frazier” within the program, either. Although unrelated, Illinois also added Chester Frazier this offseason as an assistant coach. He had previously held assistant positions at Virginia Tech and Kansas State. Prior to his time on the sidelines, Frazier was an Illini standout himself. He started 88 of 125 games with the program from 2006-2009, earning two All-Defensive selections in the Big Ten.

These two have been around the block defensively in this conference and can help Curbelo in his development. It will be interesting to see how he has utilized this offseason to improve on that end.

Illinois put together a special season in 2020-21, finishing 24-7 (16-4 B1G) and at No. 4 on KenPom. Much of that success was driven by superstar guard Ayo Dosumnu, and his departure for the NBA rightfully tempers expectations for a reprise. There is *a lot* of talent coming back, though, and that makes underestimating this roster a dangerous endeavor.

Kofi Cockburn is a legitimate star and Andre Curbelo is likely to join him as an All-Conference performer this year. The offense will run through the sophomore floor general, and there is a strong likelihood that he will lead the Big Ten in assists. With Frazier, Williams, Grandison and Hutcherson all returning, Curbelo has familiar faces to find for perimeter jumpers. The addition of Plummer gives the Illini a trigger-happy sniper off the bench as well.

With all of these pieces together, Illinois figures to be an excellent offensive team. They boast an elite passer, a top-tier finisher, and the floor-spacing necessary to bring it all together. Coach Underwood is also returning 63.4 percent of his minutes from a team that ranked seventh nationally in defensive efficiency.

All in all, Illinois basketball should enter this season safely ranked in the preseason Top 25. As far as a ceiling goes, the Illini could join the ranks of Star Wars and The Terminator with a better sequel than an original. If there was one thing lacking for them in 2020-21, it was falling short in the NCAA Tournament (against an underseeded Loyola Chicago team, mind you).

There could be a much different ending this time around.