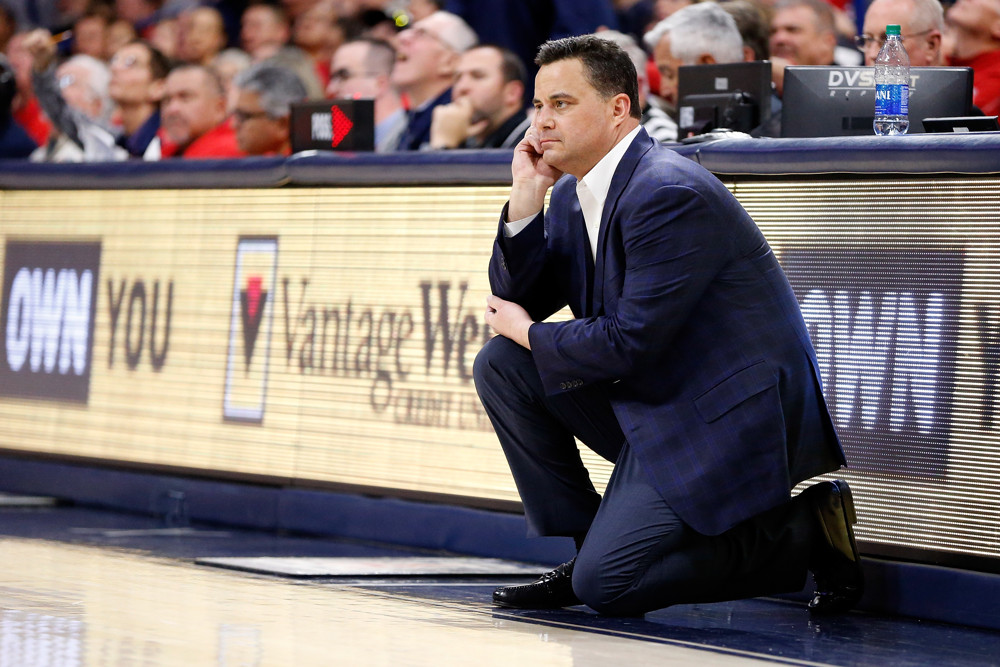 Arizona basketball parted ways with Sean Miller after 12 seasons following NCAA allegations and poor on-court play. Who could replace him?

Arizona basketball decided to part with head coach Sean Miller on Wednesday following 12 seasons in charge of the program.

Of course, that is partly due to lingering NCAA allegations hanging over both Miller and the program. Arizona was one of the schools at the center of the FBI investigation into corruption in college basketball, which has led to five Level-I allegations from the NCAA and a self-imposed postseason ban. Miller also reportedly paid former five-star center Deandre Ayton $10,000 per month while he was enrolled in school.

With those allegations and a struggling on-court product, it’s not a surprise to see the Wildcats wanting to go in another direction. Where will they go and who will they target to replace Miller? Here are the seven most likely options:

I’m lumping these two together because their candidacies are largely the same. Both are former stars at Arizona who had success in the NBA and are currently assistant coaches. Terry joined Miller’s staff in 2020, so he’s already with the program, while Simon is more experienced as he spent time on Lute Olson’s staff from 2005-08 before taking a break from coaching. He returned in 2017 and has been with the Lakers since.

Neither has any previous head-coaching experience, yet both have such strong ties that they will be considered as backup options.

A name without any ties to the school, Musselman has been incredibly impressive since transitioning from the NBA to college. He turned the Nevada program around and had Arkansas in the Elite Eight in just his second season at the helm.

He’s a hot commodity who Arizona should consider, and there have been plenty of rumors about the school’s interest in him. That said, his lack of ties to the program keeps him a little further down the list. Plus, would he want to leave what he’s building at Arkansas?

Pastner’s stock has never been higher than it is right now. He played for the Wildcats for four years under Olson and immediately joined the coaching staff upon graduation in 2000, where he stayed until 2008. He then spent one year under John Calipari at Memphis before taking over the Tigers and then landing the Georgia Tech job in 2016.

He has rebuilt Georgia Tech into a solid program in five years, winning the ACC Tournament and bringing them back to the NCAA Tournament for the first time in over a decade.

That track record, experience, and ties to the program make him appealing. At the same time, the fact he has never made the Sweet 16 and has more career seasons without an NCAA appearance (seven) than with one (four) may keep him from being a favorite.

Stoudamire also lacks a proven track record and has no postseason appearances of any kind on his head-coaching resume. But he has quickly rebuilt Pacific into a respectable team and is considered to be one of the better young coaches in the country, winning WCC Coach of the Year in 2020.

Stoudamire had a wildly successful playing career for Arizona and was an assistant with the program from 2013-2015, so he has been on both sides of the coin with the program.

While he doesn’t come with NCAA Tournament experience or a high-major coaching background, Stoudamire’s reputation and success at Pacific have put him firmly in the mix for this job. If Arizona decides to hire someone with program ties, he appears to be the guy.

Two names not currently part of the Arizona family could potentially lead the search. Gonzaga assistant Tommy Lloyd figures to be one of the primary candidates.

Lloyd has been on Gonzaga’s staff since 2000 and played a major role in their rise as a program. He has been their major international recruiter and is responsible for signing virtually all of Gonzaga’s international stars. Lloyd has played a major role in the program’s player development as well, which is also lauded as one of the best in the country.

The 46-year-old has turned down other head-coaching opportunities in the past and is contractually set to take over the Gonzaga job whenever Mark Few steps away. He loves the program and the city.

But he may also have a serious interest in the Arizona job, and that interest could be mutual. Arizona should be impressed with his track record and international recruiting ability, which could spark a rebuild and ease the transition from any potential NCAA sanctions.

Still, Scott Drew is the top guy on Arizona’s board. Drew just won a national championship at Baylor and took the program from the worst scandal in NCAA history to the pinnacle of the sport.

It’s hard to believe Drew would even entertain leaving the program he essentially built from nothing, but it could be a possibility.

Drew might view the championship as a “finished job” at Baylor and want a new challenge, one that could come at one of the sport’s premier programs and a possible pay increase, too, not to mention the upgrade in resources. Arizona certainly would check the boxes.

It remains to be seen if Drew would actually pull the trigger, especially after just winning a title, but the Wildcats should do whatever is possible to lure him away.