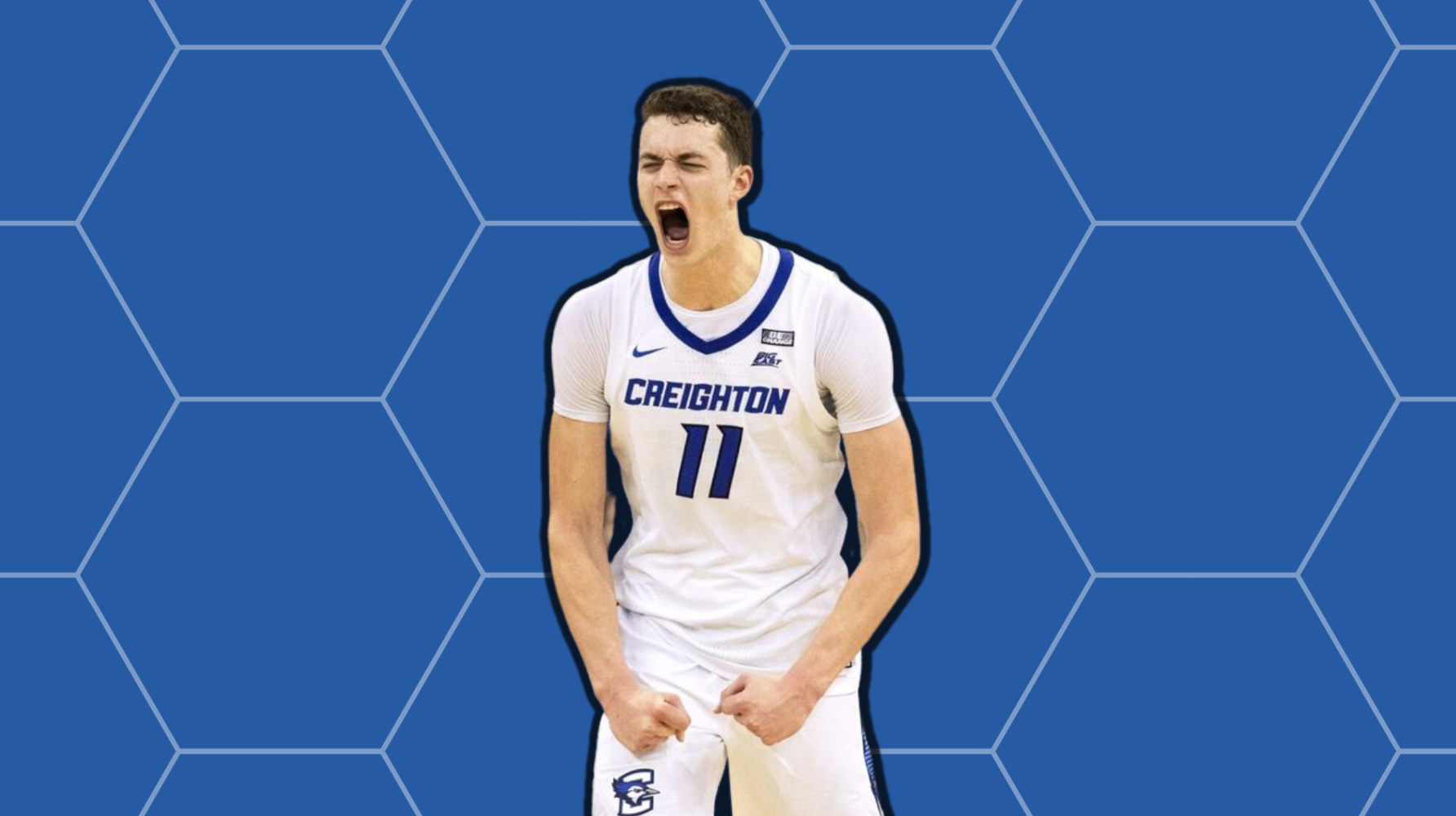 Creighton Basketball: Ryan Kalkbrenner is the elite anchor of the Big East favorite

Creighton basketball returns an exciting sophomore class, but junior big man Ryan Kalkbrenner is its anchor. Could he emerge as the Big East Player of the Year in 2022-23?

Creighton basketball is no stranger to exceeding regular-season expectations. Since joining the Big East ahead of the 2013-14 season, no team in the league has outperformed its preseason ranking as often as — or by as much as — the Bluejays. This year, however, the preseason bar to clear will be higher than ever. Creighton is the overwhelming favorite to win the Big East and likely a preseason top-10 team.

Fueling this optimism is the return of an elite sophomore class to Omaha. Ryan Nembhard, Arthur Kaluma and Trey Alexander, among others, formed the No. 9 recruiting class last summer — and these youngsters lived up to the billing. All three were named to the Big East’s All-Freshman Team, with Nembhard taking home Rookie of the Year honors. The Bluejays also return Mason Miller, who missed all last season, from that recruiting class. They also added star South Dakota State transfer Baylor Scheierman.

Somewhat lost amongst the excitement of possible sophomore breakouts is the return of Creighton’s most important player: Ryan Kalkbrenner. The 7-1 big man was incredible last season, and his absence from the primary All-Big East teams was astounding. He ultimately received an Honorable Mention; this year, however, Kalkbrenner could factor heavily into the Big East Player of the Year discussion.

The opening tip of the 2022-23 season is a ways away, but the buzz around Creighton is already at full hum. In the meantime, let’s take a dive deeper into Kalkbrenner and his importance to the Bluejays.

Creighton has traditionally been offensively inclined. In each of head coach Greg McDermott‘s first 11 seasons in Omaha, the Bluejays posted a better ranking in adjusted offensive efficiency than it did on the defensive end. In the absence of elite offensive talent last year, though, Creighton leaned heavily on defense — especially from Kalkbrenner. He answered the call as one of the country’s best defensive bigs.

Kalkbrenner used his lengthy 7-1 frame tremendously to block or alter shot most attempts that entered his vicinity in the paint. He posted the 44th-best block rate in the nation last season while averaging 2.6 swats per game. There was even a stretch where he recorded at least one block in 26 consecutive games.

Blocking shots as a help defender is one thing, but Kalkbrenner essentially took an offensive play away from opponents last season. According to Synergy, opposing teams shot just 32 percent on post-ups against Kalkbrenner. His interior presence affected opponents’ shot selections; the Bluejays forced the country’s 24th-highest rate of long 2-point shots and ranked eighth nationally in 2-point defense.

Big Ten stars Johnny Davis and Jaden Ivey stole headlines for their freshman-to-sophomore jumps last season, but their FIBA U19 teammate similarly soared into stardom. Kalkbrenner’s defensive impact changed the Bluejays at their core. Creighton finished 112th in adjusted offense, its lowest-ever rating under McDermott. Conversely, the Bluejays finished 19th in adjusted defense and reached their fifth NCAA Tournament in six years (including the 2020 bid that was inevitably coming their way).

Availability is the best ability

Kalkbrenner’s statistics as a shot-blocker — 2.6 blocks per game, 8.5 percent block rate — only tell part of the story. One of the most important traits of a rim protector is availability. Most teams would rather have an above-average defensive big who stays on the court than an excellent one constantly hampered by foul trouble. This area is perhaps where Kalkbrenner thrives most; he averaged 29.4 minutes per game.

On average, Kalkbrenner committed only 1.9 fouls per 40 minutes last season, a mark that ranked 183rd nationally and second-best in the Big East. That mark is incredible for a top-50 rim protector like Kalkbrenner was last season. In fact, of the 295 players to post a block rate better than 3.5 percent, nobody committed fewer fouls per minute than Kalkbrenner.

Kalkbrenner’s value on the floor is immense, and statistics back that up. He led Creighton in EvanMiya’s Bayesian Performance Rating (BPR) last season and finished second in on-off margin splits. Per 100 possessions, the Bluejays were 20.1 points better with Kalkbrenner on the floor than they were while he was on the bench. The frontcourt duo he formed with all-leaguer Ryan Hawkins carried Creighton for much of the year. Without Hawkins this year, Kalkbrenner’s on-off splits could stand out even more.

Here is a look at last season’s “impact” stats from Creighton’s core returners:

Kalkbrenner is as important to his team as just about anyone nationwide.

Kalkbrenner’s ability to stay on the floor isn’t only beneficial to Creighton on the defensive end. He also proved to be one of the Bluejays’ top offensive weapons last season thanks to his efficient finishing around the rim. The best guards always have a big to dump the ball off to down low — and for Nembhard, Kalkbrenner is one of the best. He graded as an “excellent” roll man, per Synergy, ranking in the 91st percentile. Kalk was also good as a cutter, shooting 39-of-47 (83.0 percent) off cuts.

Kalkbrenner isn’t much of a self-creator — nearly three-fourths of his makes around the rim were assisted — but he handles his touches efficiently. He finishes at a high rate and doesn’t turn the ball over much. Though he struggled a bit with double-teams, Kalkbrenner won the majority of his one-on-one battles on post-ups. Additionally, he takes care of business when sent to the foul line. He had the 116th-highest free throw rate in the country last season and buried 73.6 percent of those attempts.

Creighton struggled mightily from beyond the arc last season, ranking just 305th nationally in 3-point percentage. Kalkbrenner helped the team overcome those woes with his finishing and his dominant work on the glass. He ranked 10th nationally in offensive rebounding rate at 16.0 percent.

Hoop-Math shows that Kalkbrenner notched 56 points off putbacks this past season, a number that does not include the times he went to the foul line after offensive boards. Those oft-overlooked second-chance points can be pivotal in close games; the Bluejays finished 8-1 in games decided by four points or fewer (or in overtime) last season.

Kalkbrenner’s ability to consistently secure second-chance opportunities was huge, and Creighton has since graduated its two best shooters from last season. Scheierman comes in as an excellent sniper, but the Bluejays will need a lot of internal improvement to avoid struggling from deep again. Kalk will need to dominate the offensive glass again.

Kalkbrenner hit his stride when it mattered most

All of those offensive numbers are season-long marks, though. While they do include the final month of the season, it is worth isolating just how good he was down the stretch:

Kalkbrenner’s offensive emergence aligned with Creighton taking a big leap as a team. The Bluejays held a 14-8 record after 22 games and were firmly in the bubble conversation for the NCAA Tournament. The Bracket Matrix update as of Feb. 8 showed Creighton as the projected last team in the field. As Kalkbrenner turned on the jets, the Bluejays rattled off wins in nine of their last 12 games to rise up the bracketology ranks.

Creighton ultimately received a No. 9 seed in the Big Dance. The team’s excellent performance down the stretch, which was propelled by Kalkbrenner, is a huge reason for such high hopes in 2022-23.

Last season was supposed to be a transition year for Creighton. The Bluejays brought in tons of new talent to replace their old stars and were picked to eighth in the Big East. Instead of rebuilding with their recruiting class, though, the Bluejays reloaded and finished fourth in the league en route to an NCAA Tournament appearance. Last year could still be viewed as a stepping stone season, but Creighton is further down the path than most thought they would be.

Expectations are sky-high in Omaha this season thanks to the return of a star big man, a trio of excellent sophomores and a key transfer addition. Nembhard is fresh off winning Big East FOY, Kaluma is already receiving NBA Draft hype and Alexander started the team’s last 13 games. If the sophomores take the expected leaps — and if Scheierman fills a much-needed sniper role — Creighton’s ceiling is competing for the national title. As with all teams reliant on underclassmen, though, there will be bumps in the road.

When those obstacles emerge, Ryan Kalkbrenner will be Creighton’s anchor. The junior is the experienced vet of the group. He is the reigning Big East Defensive Player of the Year, but he may have his sights set on even more hardware this season. If his offensive explosion down the stretch in 2021-22 is indicative of what’s to come in 2022-23, Kalkbrenner could contend for the league’s Player of the Year award.