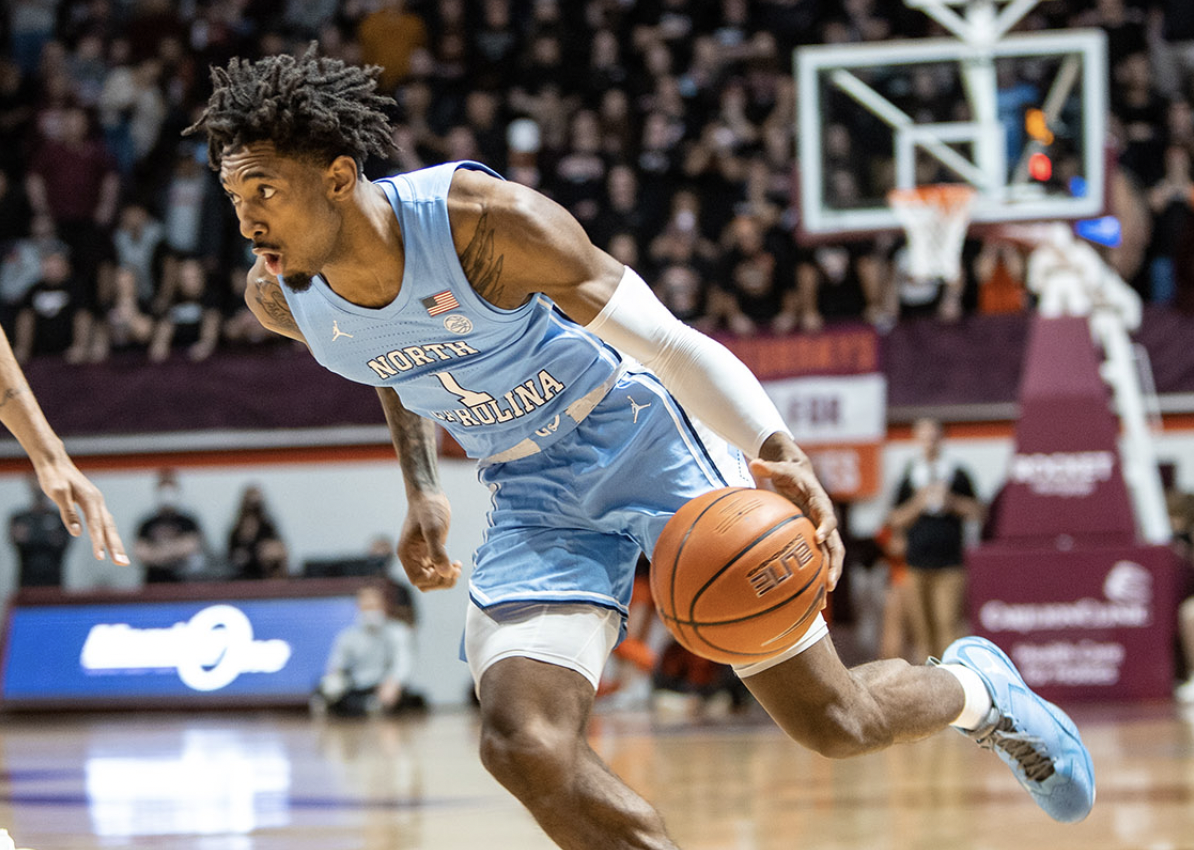 How Leaky Black’s defense will be key for North Carolina in Saturday’s national semifinal vs. Duke.

On February 16, North Carolina teetered on the edge of the bubble after a 76-67 loss to Pittsburgh in the Dean E. Smith Center. The game script followed a similar pattern to defeats earlier in the season — shots didn’t fall early, players picked up some frustrating fouls, opponents made some big buckets, and resignation from the Heels soon followed.

But this loss stung more than the previous ones. Not only did it taint North Carolina’s “clean” resume, but it also illuminated the team’s putrid defense more so than any prior game. Against UNC, the lowly Panthers averaged 1.1 points-per-possession (their highest mark of the season), converting 60 percent of their shots at the rim and 58 percent of their shots from deep. The contest led to a freefall in predictive metrics for the Heels, as they toppled to 94th in Bar Torvik’s adjusted defensive efficiency and 118th in KenPom’s adjusted defensive efficiency.

A lot can change in a month and a half. Now, in the midst of a Final Four run, Torvik’s metrics rank UNC as the nation’s 35th best defense, while KenPom has it at 39th. How did such a dramatic shift occur? Well, as the ship began to sink, the man to mend the leak was … Leaky.

During his senior season, Rechon “Leaky” Black emerged as a versatile defensive weapon, drawing the challenge of guarding opponents’ best perimeter players. But he has elevated his defense even higher this postseason, erasing foes entirely out of the game plan. Consider the stats of his primary matchup during the NCAA Tournament — none have shot higher than 40 percent from the field against him:

So what makes Black’s defense so effective? Following is a breakdown of his play in the second weekend.

In the halfcourt, Leaky most often operates off-ball. One usually sees him calling out ball-screen coverages and identifying opponents’ actions, ensuring his teammates are in an optimal position. But beyond these captain-like intangibles, Black also excels at navigating through screens to stick closely to perimeter stars.

Both the UCLA and Saint Peter’s games serve as textbook examples of Black’s savvy. Simply put, Juzang and Edert weren’t able to shine for their respective teams because they could not get the ball.

The clip below highlights Leaky’s effect on the Bruins’ gameplan:

First, he snuffs out Myles Johnson’s down screen, forcing Juzang to re-route. Then he sticks with him past a second attempted screen from Johnson and a flare screen from Jaime Jaquez. UCLA point guard Tyger Campbell keeps looking Juzang’s direction, but he can’t find a crease of daylight.

In the Elite Eight matchup against Saint Peter’s, Leaky did a similar number on tournament darling Doug Edert. As the above table indicates, the mustachioed sniper found zero space to get a shot off.

Moreover, Black also executes rotations at a high level. In the next play, he sees his man (KC Ndefo) setting a flare screen on Caleb Love to free up Isaiah Dasher for a 3-point attempt. Reading it perfectly, he sprints to closeout on Dasher, smacking the shot into press row.

Black also displays a special knack for stopping the ball in transition. He anticipates the first pass off the break and flashes the discipline and the quickness to cut off the path of the man running the floor.

In the next clip, Juzang again falls victim. Black’s presence diverts him from pulling up for a 3 (perhaps like a wide receiver “hearing footsteps”), and he instead opts to take it to the hoop. But Leaky shows off swift hips and footwork, forcing Juzang out of the lane after the closeout. Next, he uses his length to pry the ball free (then impressively capitalizes off the run-out at the other end).

His transition defense will play a pivotal role in containing the Blue Devils’ uptempo attack in the Final Four matchup. It will also be a key storyline should the Heels face Kansas in the title game.

Perhaps Black’s most valuable attribute is his ability to lock down multiple positions. The 6-7 wing guards bigger players just as effectively as he matches up with smaller guys like Juzang and Edert.

Against UCLA, for example, he also spent time on the Bruins’ well-rounded forward Jaime Jaquez. As the play below illustrates, Leaky clamped Jaquez in iso situations on the perimeter — an area where Jaquez usually has the advantage over flat-footed defenders. But instead, Black mirrors his every movement, preventing him from creating off the bounce.

Versus the Peacocks, Black saw action against the bouncy shot-blocker Ndefo. In this clip, he again exhibits his off-ball acumen, denying the entry pass to create a turnover:

It’s no wonder Hubert Davis can’t stop raving about Leaky’s defense. His play has jolted Carolina into one of the better units in the country. The head coach summarized it well in his Friday press conference at the Final Four:

“First of all, Leaky, not only is he a great defender, he’s a versatile defender. I’ve said a number of times I wish, in certain situations, I wish I could have cut him in half or in three parts to be able to guard three different people. And throughout a game he’s been able to do that. I don’t think there’s been any relief. I think he takes the challenge to guard whomever he’s assigned to. And he feels very confident from a defensive standpoint that he can defend anybody out there on the floor.”

For UNC, its defensive renaissance has been more of a defensive Rechonaissance.

All highlights courtesy of NCAA March Madness. We do not own the content. Header image via North Carolina Athletics.