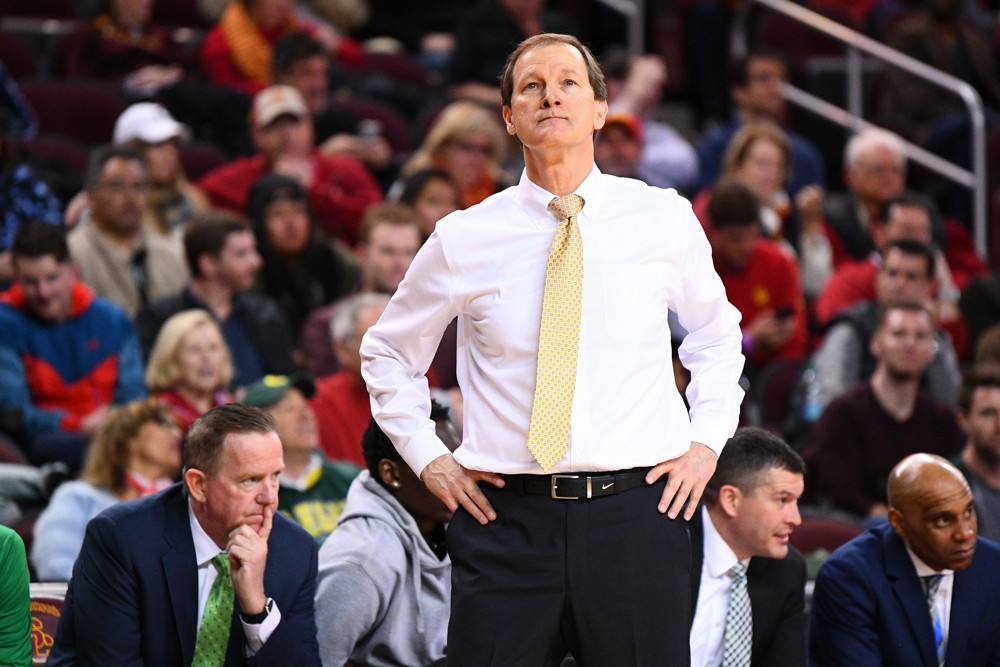 A tradition like no other, Dana Altman and Oregon basketball are stocked with a talented transfer class that keeps the Ducks in the Pac-12 title conversation.

Last season, the Pac-12 faced more COVID-related adversity than any other high-major conference, but Oregon took the brunt of it. The Ducks didn’t play their first game until December 2 due to both virus outbreaks and virus concerns. And even when they finally kicked off their season, they did so without starter Will Richardson. But the trials didn’t end after 2020. During a 26-day stretch spanning early January to early February, COVID limited Oregon to just five practices and one game.

However, once the Ducks finally got into a rhythm, they started rolling. After their stoppage, they went 10-2 to close Pac-12 play, winning the regular-season title in the process. Now, with a mix of strong returners and impact additions, Dana Altman will look to build upon his Duck Dynasty.

When Oregon started rattling off wins, it did most of its damage with its offense. Altman deployed a hyper-small lineup that yielded optimal spacing — the Ducks ranked 18th in the country in 3-point percentage and got to the rim at the second-highest rate in the conference, per Hoop-Math.

Richardson will again hold the key to the offense’s potency. The 6-5 senior operates as one of the most efficient combo guards in the country, whether on or off-ball. Though not especially explosive (one dunk in his career), Richardson displays extraordinary craft around the basket.

Plus, he has proven himself as a knockdown shooter both off the bounce and off the catch. For example, look at his play from last March: In Oregon’s final seven contests, he canned 56.7 percent of his 3s on 4.3 attempts per game.

Along the perimeter, Altman will trot out Richardson next to two transfers in De’Vion Harmon (Oklahoma) and Jacob Young (Rutgers). The two newcomers hope to replace the production of the departed Chris Duarte.

In Harmon, Altman found a seamless fit for his offense. The 6-2 wing shines as a secondary playmaker, particularly out of ball screens, where he effortlessly finishes at the rim or finds the open man. Off-ball, he hits spot-up 3s at a consistent enough rate to keep defenders honest.

Young, on the other hand, is somewhat of an enigma. Throughout his time at Rutgers, the burly point guard struggled to sustain a steady level of play. Sure, on some plays, he dazzles spectators by splitting a double team and barrelling to the basket. But on other possessions, he gets careless with his handle or sails a pass into the bleachers. Still, he boasts undeniable talent as a ballhandler; perhaps Altman can coax some consistency out of him.

Regardless, both guards will thrive in Oregon’s pressure-heavy defense. Last season, the Ducks posted the highest defensive turnover rate of any team in the Pac-12. With Harmon and Young in tow, don’t expect that to change.

Unfortunately, Oregon’s defense only succeeded at forcing turnovers. (See its finished 10th-place finish in the conference in defensive eFG%.) Specifically, the Ducks’ small lineup found it tough to keep opponents out of the lane.

However, due to this season’s frontcourt makeup, Altman should be able to resolve that issue. The head coach’s biggest win of the offseason came in the form of Syracuse transfer Quincy Guerrier. After enjoying a breakout season in 2021, the 6-8 Canadian headed west to Euguene to shore up the post rotation.

In the paint, Guerrier’s strength and footwork most distinguish him from other forwards. With a variety of post moves and pump fakes, Guerrier shakes his man and attacks the basket with fury. Also, he showcases dogged determination in hunting down offensive boards — a boon to Oregon’s mediocre rebounding.

Guerrier is best optimized as a small-ball center. In addition to his prowess around the basket, his frame and shot-blocking instincts enable him to hold up on defense. If Altman goes with this option, senior Eric Williams can resume his role as a floor-stretching 4. However, if Altman opts for a different route, Guerrier possesses enough perimeter skill to play alongside a more traditional big.

Speaking of, the head coach has two high-upside options in 6-11 sophomore Franck Kepnang and 7-0 freshman Nathan Bittle. Kepnang, a former top-50 recruit, enrolled at Oregon in January and flashed a physical style of play off the bench. Bittle, a top-30 prospect out of Prolific Prep, has the higher ceiling of the two, but his lack of strength could hinder him in Year 1. Still, the freshman displays soft touch around the basket, a smooth 3-point shot, and swats shots at an impressive rate. He does, however, need some wise veterans to tell him to shave that goatee though.

Lastly, Altman has two wildcards that could factor into his frontline. First, Isaac Johnson, a 7-foot center, will start his college career after returning from an LDS mission. Many moons ago (i.e. 2019), he ranked in the top-75 of his high school class and could be a nice depth piece. In addition to Johnson, the massive N’Faly Dante will compete for minutes. The big man once teemed with potential as an early enrollee in 2020. But sadly, injuries have thrashed his career thus far. Coming off of an ACL tear, he hopefully maintains health during his junior season.

Altman rarely gets credit for his roster-building acumen. Yet once again, he has assembled a balanced group of proven transfers, developmental program guys, and heralded recruits. The head coach’s squads often take longer than others to gel. But when Altman starts aligning those Rubik’s cubes, few teams in the country prove to be a tougher out.

Strengths: Shooting; getting to the rim; frontcourt depth