Every stat you need to know about conference tournaments

The Atlantic Sun, Big South, Horizon League and Patriot League will all tip off their league tournaments on Tuesday, setting the stage for 13 straight days of conference tournament action.

If you’ve ever wondered about how top seeds perform in their brackets or which leagues are the most prone to upsets, you came to the right place.

How often would you guess that a No. 1 seed wins its conference tournament? Maybe 60 or 65 percent of the time?

The following numbers may surprise you.

Since 2010, top-seeded teams have won their respective conference tournaments just 41.4 percent of the time. That’s still a much higher percentage than No. 2 seeds (24.6 percent), but nowhere near the number many seem to anticipate.

Since 2010, four teams that won their respective conference tournaments seeded 5th or worse have advanced to the Final Four.

The UConn “Cardiac Kemba” Huskies cut down the nets in 2011 after entering the Big East tournament as a No. 9 seed. UConn, of course, won five games in five days at Madison Square Garden and then proceeded to win six more in the NCAA Tournament as a No. 3 seed. 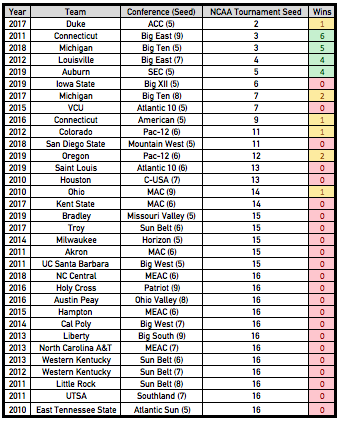 Because several of these lower-seeded teams are coming from smaller conferences, their NCAA Tournament seeds provide a daunting task. As a result, 17 of the 33 conference tournament champs seeded 5th or worse entered March Madness as either a No. 15 or No. 16 seed.

If you’re looking for chaos, tune in to the Atlantic 10 tournament.

Since 2010, teams seeded No. 4 or worse have won three times as many A-10 tournament titles as No. 1 seeds (six championships to two). Last year, sixth-seeded Saint Louis took home the crown after defeating No. 11 Richmond, No. 3 Dayton, No. 2 Davidson and No. 4 St. Bonaventure in four consecutive days. It marked the sixth consecutive year a team seeded third or worse won the A-10 tournament.

HEAT CHECK: Why North Florida should be your favorite March mid-major

There are six conferences in particular that lack the type of chaos that some of the aforementioned leagues have experienced: The Big Sky, Ivy League, WAC, Colonial, SoCon and WCC all have an average seed winner of less than 2.0 and no team seeded third or worse win it all since 2010. The WCC is the only conference that has had either a No. 1 seed or No. 2 seed winner in each of its last 10 tournaments.