Freshmen production can be a blessing to college basketball teams all across the country. This past season, players like Zeke Nnaji and Onyeka Okongwu helped lead their respective Pac-12 squads while mid-majors North Texas and South Dakota State received major contributions from first-year studs Javion Hamlet and Doug Wilson, respectively.

Going all the way back to the 1970s, freshmen weren’t even allowed to compete on the varsity level. The NCAA allowed first-year players to play in every sport except basketball and football in 1968, and then gave eligibility to those two sports during the 1972-73 academic year.

Fast forward almost 50 years, and you have freshmen running the show in college hoops. The NBA Draft’s first round is often littered with one-and-done players and several high-major programs are often built by freshmen, such as the national champion teams like 2012 Kentucky and 2015 Duke.

Time and time again, though, it’s the young and inexperienced teams that often underwhelm the most. This past season, powerhouse North Carolina and Pac-12 preseason darling Washington entered the year with lofty expectations. According to 24/7Sports, the Tar Heels welcomed the ninth-ranked freshman class while the Huskies were right behind at 10th. UNC began the season No. 9 in the preseason AP poll while Washington sat right outside, entering the top 25 the following week.

The two things these teams had in common? Both lost several key players in the offseason, attempted to retool with first-year players, and failed miserably. Based on minutes played, North Carolina lost five of its top six players while Washington saw its top five contributors depart during the 2019 offseason. North Carolina wound up with its worst season ever under Roy Williams, finishing 14-19 and 13th in the ACC. Washington, meanwhile, tallied a dismal 15-17 record and bottomed out in last place in the Pac-12. Projected first round NBA Draft choices Cole Anthony, Isaiah Stewart and Jaden McDaniels couldn’t save either of these squads.

This happens almost every season. Teams that return most of their core while adding star freshmen usually improve while rebuilding teams like North Carolina and Washington typically decline.

The table below, which uses data from the past five years, shows how teams with top 10 recruiting classes fared the following season based on combined returning minutes from their top six players. 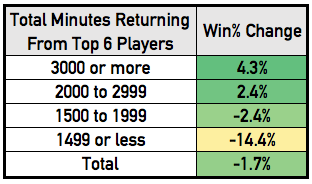 As an example, Garrison Brooks was fifth in minutes played on the ’18-19 North Carolina team at 828 minutes and was the only top six UNC player to return for the ’19-20 season. Washington’s only top six returner was Naz Carter, who recorded 740 minutes a season ago. As a result, these two teams fall under the “1499 or less” category, combining to see an average decline of 33.1 percent in terms of year-to-year winning percentage.

This data is further proof of what we hypothesized: The more returning production a team combines with a high-level freshman class, the better off the team is the following season. Teams that return 3000 minutes or more from their top six players see a 4.3 percent increase in year-to-year winning percentage while fewer than 1500 returning minutes results in an average decline of 14.4 percent. On average, teams with top 10 incoming classes actually decline on a year-to-year basis. Over the past five years, these teams have seen their winning percentage dip by 1.7 percent.

This brings us to Auburn. Bruce Pearl has done wonders with this program since taking over in 2014. The Tigers have enjoyed significant improvement in every season since 2015, going from an 11-win team that year to a No. 4 seed in the NCAA Tournament in 2018 to the school’s first-ever Final Four berth last April.

Auburn welcomes in the eighth-ranked freshman group (per 24/7Sports) this fall and is the favorite to land Jalen Green, the No. 3 overall player in the 2020 class. With five-star guard Sharife Cooper, four-star forward J.T. Thor and a pair of three-star recruits set to join the fold with Green possibly on the way, the building hype surrounding this team is certainly understandable.

Let’s go back to the earlier study, though.

Here are Auburn’s top six players based on minutes played this past season. Five of the six were seniors and won’t be on campus this fall. Freshman Isaac Okoro, meanwhile, is a projected lottery pick, has already declared for the draft, and will reportedly be encouraged by Pearl to stay in the draft if NBA front offices believe he will be selected early. 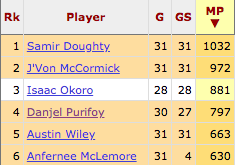 Assuming Okoro is gone, Auburn won’t bring a single minute back from its top six players for the ’20-21 season, which is obviously concerning. Take a look at how Pearl’s teams have done based on returning minutes and experience since 2008.

Since 2015, only three coaches returned fewer than 1700 minutes from the previous year’s top six players and still made the NCAA Tournament the next season: Tom Izzo, Mike Krzyzewski and John Calipari. Can Pearl be the fourth?

Based on what we already know, next season’s Tigers team will rank towards the bottom of D-I basketball in terms of both experience and returning minutes. The talent will certainly be there, but Pearl’s staff has plenty of work cut out for them in hopes of continuing the program’s positive momentum.