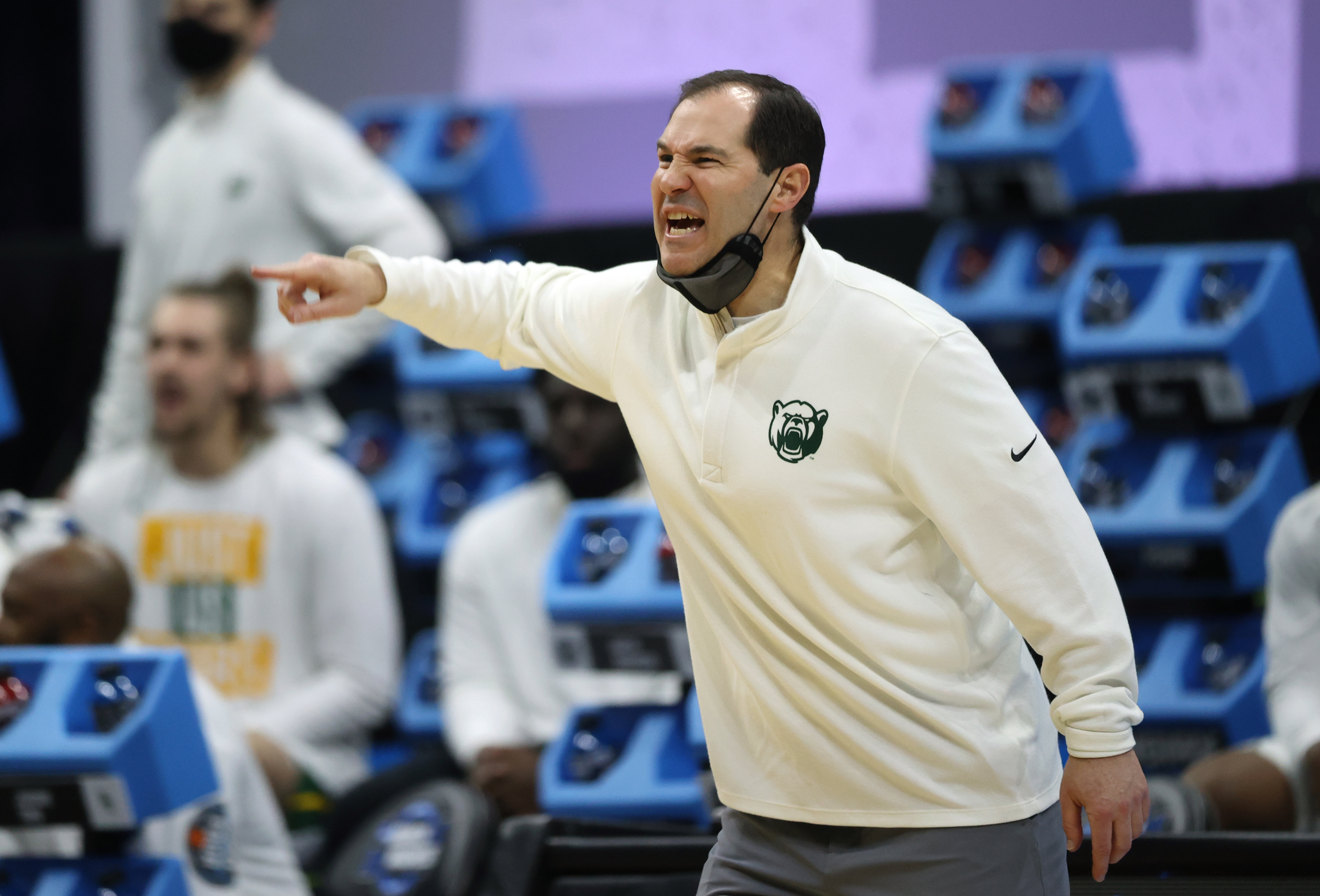 How does Baylor hold onto the top spot in the NCAA rankings?

Fresh off its first national championship in program history, Scott Drew and the Baylor Bears turn the page to the 2021-22 season in hopes of an elusive title repeat.

One of the elusive tasks in all of sports, Baylor basketball aims for a rare repeat national championship as it enters the 2021-22 season. Placed No. 8 in the initial AP Top 25 preseason rankings, Scott Drew’s Bears have question marks but remain capable of another special campaign.

Should Baylor retain its spot atop the college hoops mountain, it will have to rely on newcomers and internal development. Last season’s top three scorers in Jared Butler, MaCio Teague and Davion Mitchell have all departed, with sturdy frontcourt Mark Vital moving on as well.

While Baylor is more than capable of recharging, these losses can’t be overstated.

Mitchell began his career at Auburn as a reserve before transferring to the Bears, and in the process developed into the Big 12’s top defender and was taken 9th overall in the draft.

Butler led the team in scoring at 16.7 points per game and had 22 points in the convincing national title victory over Gonzaga in April. Like Mitchell, he was also taken in July’s draft, going 40th overall.

Teague is another success story, receiving minimal interest as a recruit before committing to UNC Asheville, where he likely would have stayed if it weren’t for a coaching change. He averaged 14.9 points over 58 career games with Baylor, starting in every appearance.

Vital, meanwhile, recorded 106 Baylor starts over the past four years before transitioning to an NFL career and is currently with the Kansas City Chiefs.

With that in mind, the attention quickly turns to Adam Flagler and Matthew Mayer. Neither player cracked the starting lineup last season but the duo will go a long way in determining how Baylor’s 2021-22 season unfolds.

Flagler, who has already been profiled in depth by Heat Check CBB this offseason, will take on a substantial offensive role. The former Presbyterian transfer had a huge March, a positive sign for the program as his workload increases this fall. He averaged 10.7 points and 1.5 steals during Baylor’s tournament run and had a stunning 12-of-18 mark from three-point range and 18-of-19 clip from the line.

Mayer, meanwhile, has the skillset to be a fringe All-American. Listed at 6-9, Mayer can pop out for three-pointers at a high clip but also remains a stellar defensive rebounder and is active on defense. Despite logging just 15.7 minutes per game, Mayer still finished 10th among Big 12 players in steals.

Drew’s staff struck in the transfer market in hopes of rebuilding the backcourt, scooping up Arizona transfer guard James Akinjo. After tallying over 15 points and five assists a night with the Wildcats, Akinjo will set the tone for the new-look Bears lineup.

With Akinjo and Flagler in the BU backcourt, Baylor will have no shortage of capable floor-spacers in the lineup, even though maintaining the nation’s best three-point attack at 41.3 percent is unlikely. Don’t be surprised if reserve LJ Cryer pitches in on the perimeter attack.

The gem of Drew’s recruiting class is Kendall Brown, a 6-8, 205-pound freak athlete who will be a nightmare matchup for opposing defenses. Given Mayer’s versatility and the paint presence inside by veterans Flo Thamba and Jonathan Tchamwa Tchatchoua, Baylor’s frontcourt remains in good hands for the foreseeable future.

Based on the latest college basketball odds comparison, Baylor checks in with the 14th-highest preseason national title odds at +2200, per Sidelines.io. There is reason to believe that the Bears still hold quite a bit of betting value for the 2022 season, even though they aren’t considered a primary contender and rank third in title odds among Big 12 squads, behind Kansas and Texas.

Baylor’s outlook for the upcoming season is still incredibly favorable. On paper, Drew’s staff has another elite roster on its hands and now it’s a matter of developing the returning pieces and meshing the incoming talent together into a cohesive unit.

While the Bears are unlikely to be as elite offensively, Akinjo is surrounded by a budding star in Brown, a breakout candidate in Mayer and a sharpshooter in Flagler. With the influx of new pieces and rotational shuffling, it could take some time before Baylor reaches its potential. But assuming Drew can work his magic yet again, Bears bettors should expect a profitable season.