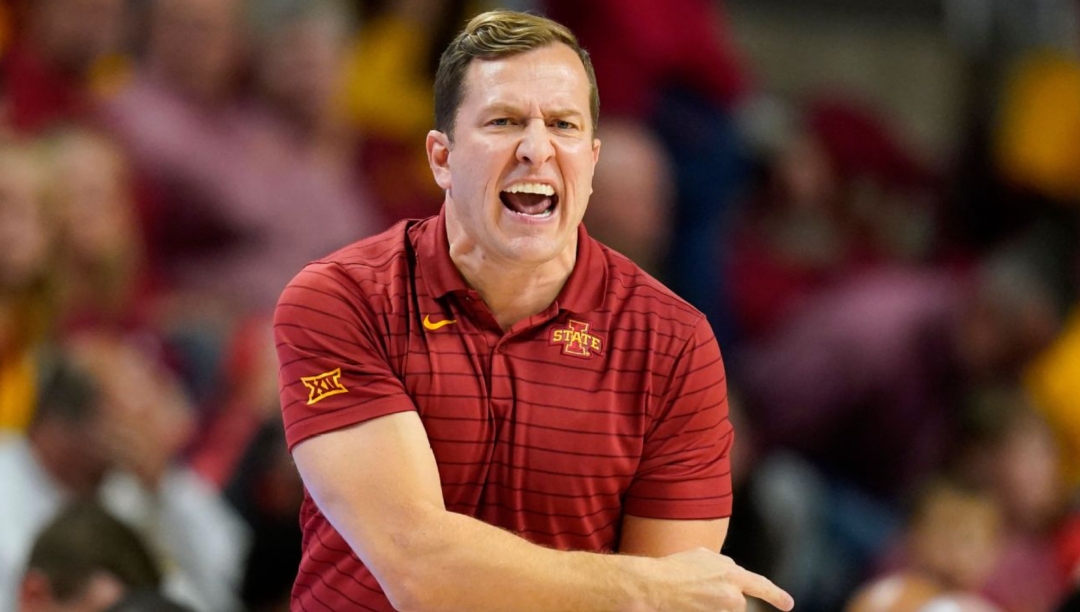 Inside T.J. Otzelberger’s Iowa State resurgence and Friday’s ‘special moment’ that will last a lifetime

Iowa State’s upset of top-ranked North Carolina on Friday provided a ‘special moment’ that will last a lifetime between T.J. Otzelberger and Caleb Grill.

PORTLAND, Ore. – The road to recovery in college basketball is a winding and twisting one. In 2021, fresh off its first winless Big 12 season in program history, the Iowa State men’s basketball program needed something to believe in.

Just 20 months later, the Cyclones are as relevant as ever.

On Friday, T.J. Otzelberger’s pesky Iowa State squad dug out of a 58-51 deficit with five minutes to go in an eventual upset over No. 1 North Carolina, last year’s national runner-up.

The Cyclone fanbase that made the trek to Portland exploded in celebration when the buzzer sounded, signifying the program’s first win against a No. 1 team since the Jan. 18, 2016 victory vs. Buddy Hield and Oklahoma.

It’s a neutral-site win in November, sure. But Friday’s performance reaffirmed just how dramatically things have changed in Ames under Otzelberger’s lead.

Few could have accurately predicted the first 50 games of Otzelberger’s tenure. National media was largely underwhelmed with Iowa State’s hire in 2021, raising questions about his sub-.500 UNLV tenure and how much of his South Dakota State success was attributed to superstar Mike Daum.

But in 50 games under “TJO”, the Cyclones have completely reinvented themselves since the ’20-21 disaster. Iowa State has six top-25 wins, an AP top-10 appearance, a Sweet 16 with wins over 6-seed LSU and 3-seed Wisconsin, and now an upset of the top-ranked UNC Tar Heels, all while being picked last in the ’21-22 Big 12 preseason poll and eighth in October’s media projections.

Not a bad resumé. Not bad at all.

“We don’t spend a whole lot of time wondering or worrying about what happened or what others think,” Otzelberger told Heat Check CBB. “It’s the same work habits I learned from my parents as a kid that we try to employ every single day.”

The ’22-23 Cyclones don’t have a top-100 recruit on their roster. Iowa State’s starting lineup includes two St. Bonaventure transfers who had three combined scholarship offers, a UNLV transfer who originally signed with South Dakota State, a Slovenian native who played 16 minutes a night with Washington State, and a three-star freshman point guard from Ames.

Otzelberger knows how to get the most out of his players.

Caleb Grill sat beside his head coach after going nuclear on the UNC offense, dropping a career-high 31 points with countless off-balance triples against some of the nation’s best defenders.

Grill and Otzelberger share a close bond. Otzelberger, then the head man at South Dakota State, signed Grill out of high school. But when Otzelbeger left for UNLV in March of 2019, Grill ultimately picked Iowa State.

After a modest freshman campaign, the 6-3 sharpshooter reunited with Otz the following year when the Kansas native joined the Runnin’ Rebels.

“He’s the first coach to believe in me as a player,” Grill said about his head coach. “It’s just a special moment for us.”

Naturally, it was Grill who played heroics in the biggest signature win of Otzelberger’s career. Over the final 11 minutes, Grill didn’t miss a single shot, hitting two jumpers, a pair of off-balance 3-pointers and two free throws to ice the victory. He outscored UNC 10-5 over the final three and a half minutes on his own.

Why would the story be written any other way?

“Winning games is awesome,” an emotional Otzelberger said during Friday’s postgame press conference. “But to do this with people that you love, it’s really special. My sense of gratitude and thankfulness I have right now couldn’t be greater.”