Those who follow my work know I’ve been fascinated with the 2019-20 Maryland basketball team for quite some time now. In October, I performed a study which found that Maryland is the only team in the country this season to meet the same criteria as each of the previous 17 national champions.

All of that could still very much go up in flames, and I wouldn’t be all that surprised if it did. The Terps, however, are starting to look like a legit contender after a heavy dose of national skepticism heading into the year.

First off, Turgeon’s so-called inability to win in March is largely overblown. Turgeon’s average seed per tournament appearance dating back to his days at Wichita State is 6.4, which has translated to an average of exactly one tournament win per year over his nine career March Madness appearances. According to BracketOdds’ seed advancement tool, No. 6 seeds average 1.07 wins per tournament, so Turgeon is actually performing right in line with his seed expectation. After all, Turgeon’s teams have never been higher than a No. 4 seed.

Turgeon’s coaching is one thing, but the team itself — even despite all its successes — has its concerns as well.

Needless to say, Maryland is fortunate it doesn’t have at least two or three more losses on its schedule.

Part of the Terrapins’ inability to pull away from opponents is due to its lackluster shooting. As of Thursday, Maryland ranks 226th in effective field goal percentage at 48.5 percent, 246th in 3-point percentage at 31.8 percent, and 32nd in adjusted offensive efficiency.

In terms of difference between adjusted offensive efficiency rank and effective field goal percentage rank, Maryland has the ninth-largest positive margin in the country. 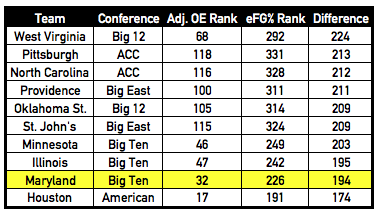 Much of this can be explained by Maryland’s strong marks in the other Four Factor offensive categories, where the Terps rank 68th in turnover percentage, 63rd in offensive rebounding percentage, and 51st in free throw rate. Maryland also tallies 22.6 percent of its points via the charity stripe, which ranks 25th in the nation.

The big question is whether this will be sustainable for six games in the NCAA Tournament: Virginia and Villanova — the last two national champions — were elite on the offensive end thanks to their tremendous shooting ability.

Maryland’s shooting is … well, pretty bad. Maryland’s top six scorers are listed below with each player’s stats on 2-point jumpers and 3-pointers, as well as combined jump-shooting percentage on the right.

Anthony Cowan, Jalen Smith and Aaron Wiggins lead the team in usage and the trio is shooting a combined 24.3 percent on 2-point jumpers. Eric Ayala, meanwhile, is shooting 25.6 percent from deep despite taking 4.7 3-point attempts this season. Among the 517 players in the country averaging at least 4.5 attempts from deep this year, Ayala ranks 505th in terms of shooting percentage. That’s 0.77 points per attempt … not efficient.

So where does Maryland go from here? Jalen Smith is a good place to start. The 6-10 forward is a solid scoring option on pick-and-pop plays, shooting 38.0 percent from 3-point range. He has also converted 21 putbacks this season, which is one per every four offensive rebounds — Smith has logged 84 offensive rebounds through 26 games — and he makes slightly over 70 percent of his attempts at the rim, according to Hoop-Math.

Combine Smith’s versatility, Cowan’s driving ability, and an occasional Terrapin jumper (hopefully) to a team ranked No. 5 nationally in adjusted defensive efficiency, and it explains why Maryland is atop the Big Ten ladder. Those who refuse to believe in the Terps, however, have a solid argument.