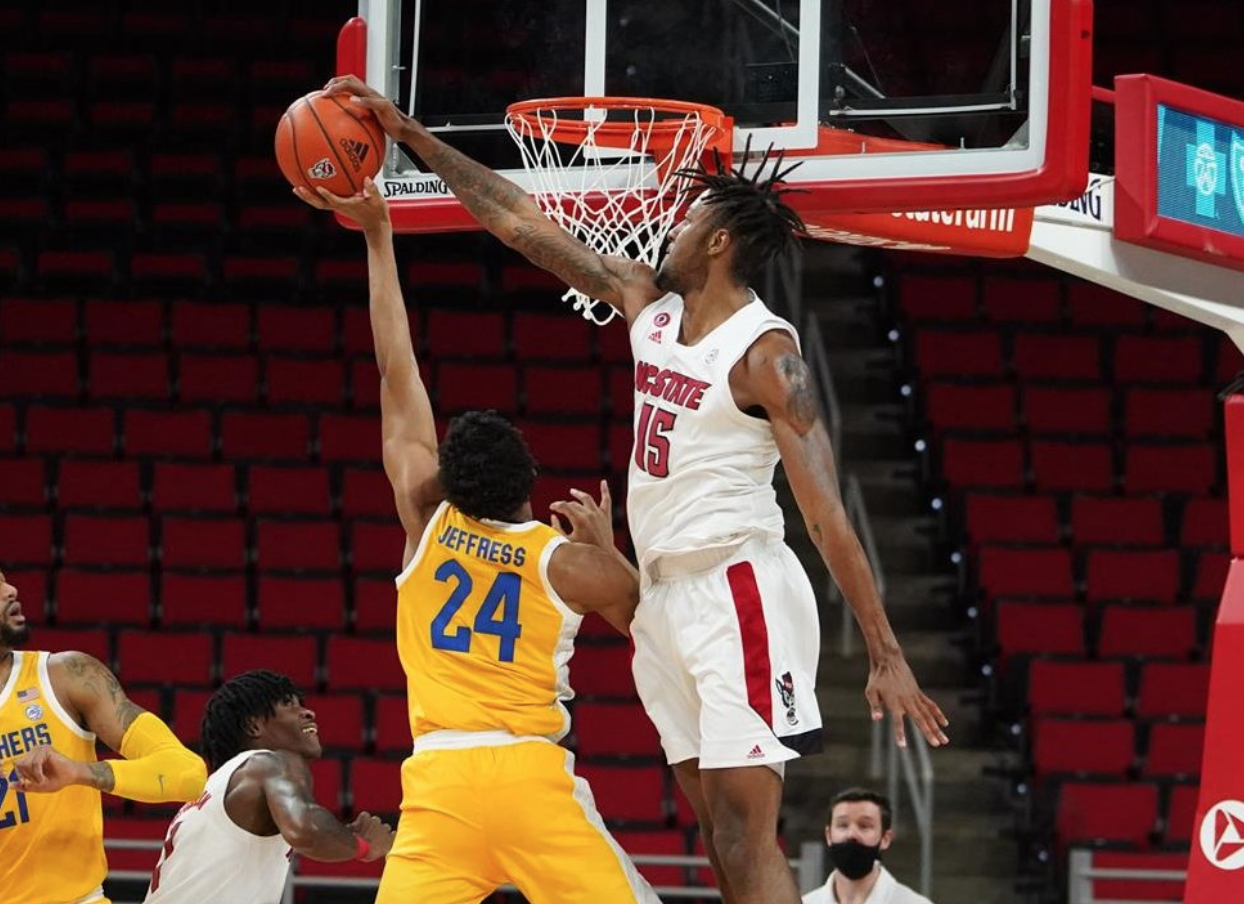 The third week of May must have been a long one for NC State head coach Kevin Keatts. This was when rumors started flying that Wolfpack center Manny Bates was rumored to be leaving. It was also the same week rising sophomore point guard Shakeel Moore announced his transfer to Mississippi State.

These issues were not isolated to NC State but were instead a part one of the biggest overall shifts in college basketball history. Per Verbal Commits, 1,765 players entered the D-1 transfer portal this offseason, up from the 1,011 who entered in 2020 and the 988 transfers from 2019.

Through the transfer portal and graduation, NC State lost four of its top seven scorers from last season’s 14-11 team. The Wolfpack scored the fifth-most points in the ACC and those four players accounted for 44 percent of the team’s scoring.

Already losing so much firepower, the thought of the team’s best player leaving couldn’t have been easy for Keatts to stomach.

“He’s a game-changer,” NC State head coach Kevin Keatts said at Wednesday’s ACC media day. “The way we play is we like to extend our defense, to pressure the ball and take gambles. We love steals and try to get deflections; we try to get 40 deflections a game. Because of Manny Bates, we’re allowed to play that way.”

“He is without a doubt the best defensive player that I’ve ever had as an assistant or head coach,” Keatts added.

While the rumors were heavily swirling, Bates had not yet put his name into the transfer portal. The week passed and Keatts met with Bates on that Friday. The two talked candidly and openly about the decision. Bates went home to Fayetteville to talk with his family, and think about his next move.

“I came back on that Monday and it was just a feeling like I have done so much here, why leave and go to a different situation?” Bates said. “I would have to learn an entire new system. My relationship to the guys here is already good as it is. It was pretty much like, ‘why leave?'”

For Bates, instead of leaving, it was time to get to work. He has unfinished business in Raleigh.

Despite leading the Wolfpack in rebounding last season, Bates knows he needs to continue to improve his 5.9 rebounds per game. Bates also realizes that with DJ Funderburk now gone, he is going to be asked to take on more of a scoring load.

“I have become a better rebounder,” Bates said. “I’ve not really been focusing on one particular thing, instead trying to be an all-around player. So, being a better rebounder and gaining the confidence to shoot 15-foot jumpers.”

Who is Manny Bates?

Bates enters his redshirt junior season at North Carolina State as one of the nation’s feared shot-blockers. The 6-10 center led the ACC in blocked shots at 2.7 per game last season. He was also the only D-1 player to block more than 2.5 shots, grab 5.5 rebounds, and shoot 64 percent from the field. His 10.7 block percentage was one of the best of any returning starter in America.

Bates has led the ACC in blocks per game during both his freshman (2.9) and his sophomore (2.7) seasons. Bates led the league as a freshman with 89 total blocks, and last season he finished second — two behind Jay Huff — with 64 total blocks.

“There is an art to blocking shots, but that art is really just timing,” Bates said. “I feel like I have been doing this for so long so I know how to read and go get a shot. It is really all timing and instinct.”

What Manny Bates brings to the floor

Bates brings a line of protection to his team. With what he does so well, he is able to give his teammates the confidence to go out and do what they do best. Just like Linus from Peanuts carried his security blanket around, Kevin Keatts defense has Manny Bates.

“For what we do defensively, Manny Bates is incredible,” Keatts said. “I don’t know that I can play the way I play without having a guy like that. He cleans up every mistake our guards make. When they go for gambles or cheat a little bit, they are able to do that because they know Manny is back there on the back end.”

Bates’ teammates feel the same way. They know what Bates is, what he brings to the table, and how he is able to enhance everything the team does on the defensive side of the floor.

“He gives you a sense of having a second line of defense,” NC State senior forward Jericole Hellems said at ACC media day. “Being able to have someone like him on your team gives you confidence. Not only that, it makes you step up your game. It makes you want to step up your defensive ability, too.”

While Bates is one of D-1’s premier defensive players, his offensive game is one that is continuing to grow. In his 23 starts at 27.4 minutes per game, Bates averaged 9.8 points and shot 64.1 percent from the field.

“From an offensive standpoint, in today’s game where there are not a lot of back-to-the-basket guys, he is so important to us,” Keatts said. “We can throw the ball in to him and now he can finish over both shoulders.”

Bates finished last season with a 123.5 offensive rating and a 3.2 offensive box plus-minus. He joins Armando Bacot, Mark Williams, Anthony Polite and Nate Laszewski as one of only five returning ACC players to have their offensive metrics fall in this range.

Both Keatts and Bates have made it a point to talk about Bates’ expanded role in the offense. Bates spent a lot of time in the gym this offseason. By most accounts, much of that time was building on his jump shot. With Bates’ confidence growing in his jumper, Keatts’ confidence is growing in Bates.

“Almost every one of my workouts have had something to do with shooting, whether it be the pick and roll, pick and pop, icing situations,” Bates said. I feel like all of that confidence is just helping me more. I really spent time trying to build confidence wherever I am at on the floor”

“I expect Manny to show a lot of people that he is more than a defensive player,” Hellums said. “I’m super proud of him, the work he has put in and to overcome the things he has gone through in his career. I’m very excited for him to be able to showcase his talent.”

Bates is poised for an all-ACC nod and the conference’s Defensive Player of the Year honors given his overall skillset, and now his confidence and expectations are mounting as well.

It’s time for the Wolfpack leader to go out and play ball.