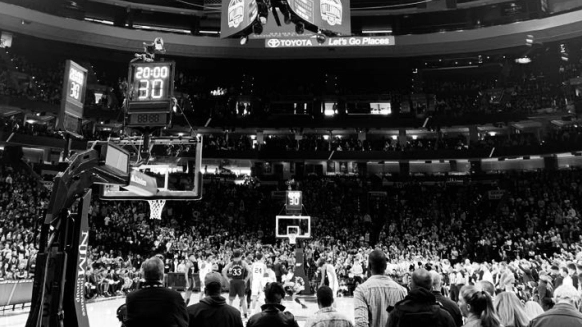 The Big Ten, Pac-12 and Mountain West recently decided to push back football and other fall sports until at least January. With college basketball slated to begin in just three months, the pressure is now on the sport’s leadership to avoid the same conclusion.

Part 1 of the interview can be seen below:

Gavitt, Barnhart and Robinson discussed the current state of the college basketball schedule, how other sports leagues have responded, and potential solutions towards the upcoming season.

“We’ve been working on contingencies and studying what it is that makes the most sense for college basketball for months now,” Gavitt said.

“We remain very confident that we will have a college basketball season, albeit different, and maybe altered as necessary.”

Kentucky athletic director Mitch Barnhart, meanwhile, stressed the importance of players remaining active in their schoolwork, whether it’s inside or outside of the classroom.

“We need to pay attention to being a college student — that is still a part of this process that we have to factor in,” Barnhart said when asked about the logistical obstacles of a “bubble.”

“You’re going to have a lot of institutional decisions and a lot of conference decisions,” Barnhart said. “Once students have gone away from campus and are no longer in classes, that is a unique opportunity for us to try and focus on the game of basketball and grow us into our season.”

Gavitt also discussed the additional contingency plans that could be in place over the coming months to ensure a season is held.

“We’re going to end up, I’m sure, with about four or five contingencies,” Gavitt said. “Our best hope is that we have the tournament as scheduled and with some fans in attendance and have 68 teams and crown a national champion in that way.

“But we’ll have decision points along the way, including getting to a potential bubble-like situation if that’s the only way to run the tournament safely and responsibly to determine a national champion.”

A “bubble” — similar to what the NBA and NHL have used for players to participate in a confined area to ensure safety — was discussed in detail.

“During the month of late November and into December when most of our schools are going to be in virtual learning environments and/or then after exams during the traditional holiday break, that is potentially an opportunity to create regionalized and very controlled environments in a bubble-like scenario for nonconference or conference games,” Gavitt said.

“We need to be responsible and take advantage of the opportunities and windows that we have when they are there for us to get a season in and get a tournament in in a safe and responsible way.”

The 2020-21 college basketball season has already been impacted by COVID-19-related scheduling changes. The Pac-12 announced Tuesday that it will postpone athletic competitions until at least January, which erases the league’s nonconference basketball schedule. Additionally, several multi-team tournaments scheduled for November and December have also seen changes in participating teams and locations.