March Madness fans aiming to pick up a few dollars from this year’s bracket pools will need to put in some extra studying this time around.

In what has been one of the most parity-driven seasons in recent memory, national title contenders are popping up from lesser-known pockets of the college basketball map, likely forcing some challenging bracket picks next month.

Following a season where Zion Williamson highlights blew up social media feeds, the 2019-20 college basketball season lacks a household player or a powerhouse favorite. Sure, Baylor, Dayton and San Diego State are a combined 72-3 and Kansas, Duke and Gonzaga have been as good as advertised, but the broad conversations about the sport are wildly different than they were a year ago. 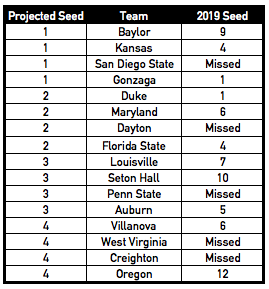 Kansas, Gonzaga, Duke and Florida State are the only projected returning top four seeds while San Diego State, Dayton, Penn State, West Virginia and Creighton are aiming to go from missing the tournament to a protected seed.

Here are a few more interesting facts based on data since 2011: