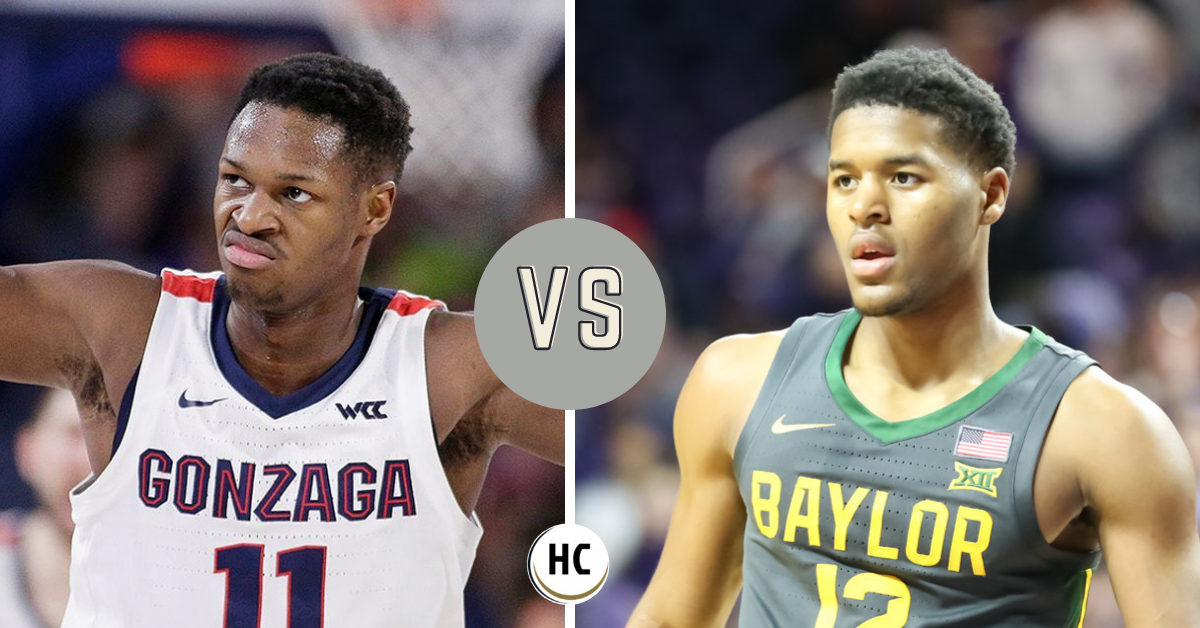 If these rosters seem familiar, you may be thinking of one the players in this list.

Well, we finally made it here, to the precipice of the NCAA Tournament title game. It feels great after all this time to be here with the cancellation of the event last year.

Though there’s a very justifiable sense that we haven’t seen a national title game in forever — and despite neither school having ever won a championship — there’s a tinge of familiarity to these teams. It’s as if we’ve seen these players before.

Or, at least, we’ve seen players like these ones before.

As we gear up for this clash of 2021 titans, we are arching our necks backwards and peering through some recent history, just in case you needed another reason to get unreasonably excited for Monday’s final. Using KenPom’s player comparison feature, we’ve identified notable statistical comps for each of the 15 players who will play the lion’s share of minutes in the title game.

(Note: These aren’t necessarily the closest comparisons, but all of the players noted below were among the top five nearest facsimiles, as determined by Ken Pomeroy’s algorithms. If you want more info on how the comparisons are made, or just want to peruse for yourself, I suggest you get a subscription to his site and start poking around.)

This first comparison makes a ton of sense: super-highly rated freshman point guards who can score, pass, and rebound, and who have the confidence and skill to put a team on their back when they need it. Suggs has had the better shooting season (though the majority of his games came against WCC defenses), while Wall was arguably the better passer. Still, when your point guard’s top comp is a former No. 1 overall pick in the NBA Draft, you know you’re in good hands — even if those hands commit slightly more turnovers than you’d like. I think we can all agree that you’ll give up a few turnovers for the kinds of highlight-reel plays that Suggs made at the end of Gonzaga’s epic semifinal win over UCLA.

Not many teams have the luxury of getting to choose whether to add a guy like Nembhard to an already-championship-caliber roster, but that was the position Mark Few and the Zags were in once the NCAA decided to allow transfers to play this season without sitting. So what did they add? A perfect backcourt mate for Suggs, much like DiVincenzo was for Villanova star Jalen Brunson. While Suggs may handle the ball more, Nembhard’s deadly efficiency and careful, heads-up play makes him an essential complementary piece in Gonzaga’s run. Hey, it seems to have worked out pretty well for that 2018 Nova team.

Speaking of Villanova players who cut down the nets recently, Gonzaga’s swiss army knife — er, French army knife? — draws his closest comp from former Wildcat and current NBAer Josh Hart. Specifically, Ayayi’s junior year matches up nicely with Hart’s third season, in which Villanova cut down the nets for the first time under Wright. Both players are able to shoot with efficiency from both inside and outside the arc, contribute heavily on the defensive end, and fill in the gaps when the brightest stars begin to fade a bit.

Noticing a pattern here? The comparisons between this Gonzaga team and the recent championship squads out of Villanova are hard to ignore, and we’ve got one more example here with Kispert and Bridges. If you noticed that the advanced stat line above is a little scanter than those above, that’s because Kispert is a bit of a scoring specialist for the Zags, and he does it just about as well as anyone. Bridges may register more steals and blocks, but Kispert isn’t a liability on the defensive end, and Spokane’s elder statesmen more than makes up for it with his three-point shooting prowess and veteran IQ (see also: those low turnover and foul rates above).

For a team that already has (essentially) John Wall and three of the key pieces of Villanova title runs, it seems unfair to also add an All-American big man in the vein of Sullinger, but that’s exactly what Mark Few has done with this 2021 Gonzaga roster. Drew Timme has turned into arguably the best post player in the country, thanks in part to some fantastic athleticism and footwork that makes up for what he may lack in the classic big man bulk. Timme also has a knack for drawing fouls while being relatively cautious in terms of committing his own, meaning he isn’t taking himself out of games unnecessarily. When all of Gonzaga’s starting pieces are clicking, it’s not hard to figure out why they haven’t lost a game yet. (Hint: It’s not because of their schedule.)

Oh, now we have a Baylor comp on the Gonzaga side? Watson’s penchant for coming in and playing stalwart defense and making just about everything he shoots (72 percent on two-pointers in 2021) looks similar to the freshman campaign of Tristan Clark, whose promising career was sadly cut short by injuries before he could truly blossom into a star. Still, for Watson, the comparison is very favorable: ridiculously efficient offense in small samples, high block and steal rates, and capability on the offensive glass.

With Mark Few streamlining down to a mostly seven-man rotation during the NCAA Tournament, this will be the last Gonzaga compo, and what better way to end it than with another Zag? Similar to Crandall, Cook transferred to Spokane after logging multiple years with midwestern mid-majors. Mark Few has deployed Cook as a utility guard when needed, a valuable bench piece whose competent offense and active defense ensures there’s not much drop-off when someone in the Zags’ backcourt needs a breather.

While Donovan Mitchell’s college career may not be quite as heralded as the impressive NBA years that have followed, there’s a reason he only lasted two years in Louisville. While the name and number are obviously a little closer to a different Baylor guard, Donovan Mitchell and Jared Butler have a bit more in common, according to the numbers. Butler’s high-efficiency shooting while registering such a large portion of the Baylor offense is part of why the junior has become so well-regarded. When you add in that Butler is running the show for an offense that generates a ton of assisted buckets, it’s easy to imagine his game will translate nicely to the next level.

OK, now that we’ve discussed Donovan Mitchell, let’s get to Davion. The Baylor junior has established himself as the top defensive player in the country, as noted by his recent haul of the Naismith Defensive POY award. But there’s more to “Off Night” than just his lockdown defense. Mitchell’s offensive game was on full display in the semifinal against Houston, and this combination is reminiscent of another spectacularly nicknamed player in Syracuse’s Scoop Jardine, who likewise shared a crowded backcourt with fellow guards Dion Waiters and Brandon Triche. Mitchell’s performance down the stretch for Baylor certainly earns him equal billing with Jared Butler, even if the latter has generally been seen as the “face” of the team. In fact, “Off Night” may actually be the most important player on this team, for his ability on both ends of the court.

This comparison is interesting because while Teague sometimes gets lost in the shuffle with just how good Butler and Mitchell are, it’s notable that one of his closest comps — Malcolm Brogdon as a senior at Virginia — ended up with consensus All-American and ACC Player of the Year accolades. If that’s the quality of player that Baylor is throwing out as their afterthought, it’s no wonder opponents have been throwing their hands up in exasperation all year. Teague shoots 39 percent from deep, doesn’t turn the ball over, and seemingly never fouls. There’s not much more could you ask for out of a guard who isn’t really tasked with running the offense on most possessions.

This is my favorite comp on here because it speaks not only to how seamlessly Mark Vital picked up where he left off last season, but it also demonstrates the rarity of these types of players. Because he plays like a dyed-in-the-wool post, it’s easy to forget that Vital stands just six-foot-five. Still, what the senior lacks in height, he makes up for in strength, grit, and motor. The Louisiana native is one of the best rebounders in the country, logs tons of steals and blocks on defense, and is capable enough in the post when called upon. You just keep doing you, Mark.

Though not a starter, Flagler has established himself as a crucial shooter off the bench for Scott Drew during the Bears’ run to the title game, similar to the role Gilder played during Texas A&M’s run to the Sweet Sixteen five years ago. Like Gilder — who would end up transferring to Gonzaga to finish out his career — Flagler got his start at another school, torching the nets for Presbyterian last year before transferring to Waco. He’s not asked to do too much for Baylor, but when he is called into action, he’s a Top-20 player nationally in terms of offensive efficiency.

While Jordan Morgan made the relatively short jump from his hometown of Detroit to four years in Ann Arbor, the path to prominence for ‘Everyday Jon’ has taken a more circuitous route. Hailing from Cameroon, Tchamwa Tchatchoua played his freshman season at UNLV before transferring to Baylor and sitting out last season. Now that he’s on the court for the Bears, the pick-and-roll specialist has provided plenty of highlight dunks, but it is his tenacity on the boards and his stalwart defense that makes him such an important cog in Baylor’s team.

Hey, if Gonzaga gets to have a Baylor comp (Anton Watson/Tristan Clark), then why shouldn’t it work the other way? While many are quick to compare Mayer with Drew Timme for the follicular escapades, Mayer actually plays like another bearded Zag from the 2020 team: Killian Tillie. Like his French counterpart did last year, Mayer has shot exactly 40 percent from beyond the arc this season, while also providing energy and hustle. In fact, while Tillie may be the more skilled player of the two, Mayer’s motor and attitude give this Baylor team an intangible edge that may well match the mystical, mustachioed magnetism of Timme.

Our last comp here is Flo Thamba, the fifth starter on this Baylor team, but mostly in name only. Thamba may not provide the minutes that bench players like Flagler, Tchamwa Tchatchoua, and Mayer do, but his contributions to the team are still very valuable. The Congolese junior is a nuisance to opposing rim-attackers, rebounds well on both ends of the floor, and is reasonably efficient in a small shooting sample. It remains to be seen if Thamba will take on an increased role like Lucas did in his final season for Kansas, but regardless of how the future plays out, having a big man like Thamba in tow could force Gonzaga to rely more heavily on the long ball.

So, the final “comp” lineups would look like this:

As fun as this imaginary matchup might be, we only have to wait a few more hours before seeing basically the same thing in Monday night’s NCAA Tournament championship game.