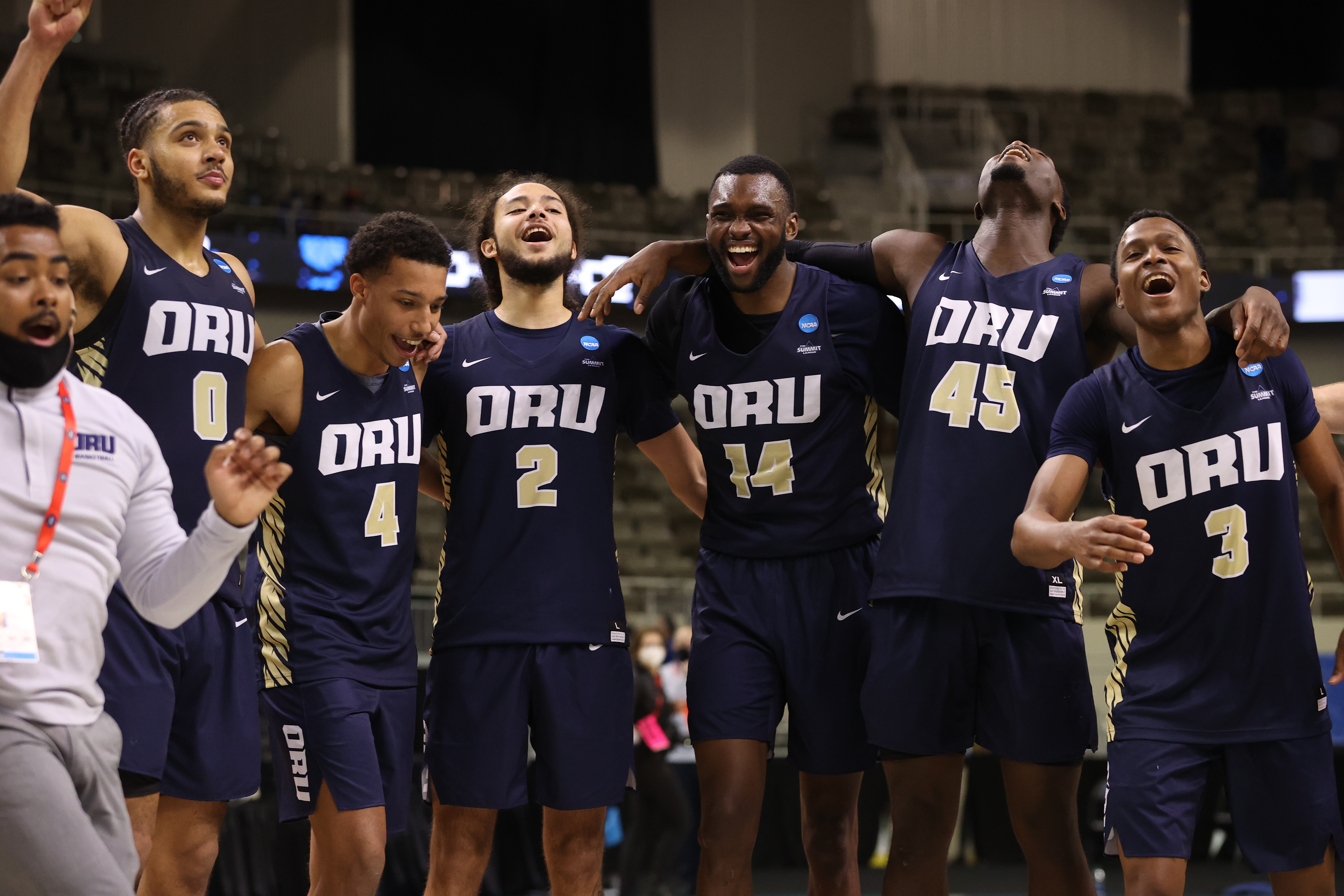 Check out what the Heat Check CBB staff has to say about the biggest storylines heading into the NCAA Tournament second weekend.

Welcome back to the NCAA Tournament. The Sweet 16 tips off Saturday afternoon with four headlining matchups.

The Heat Check CBB staff is here to break everything down as we enter the March Madness second weekend. Check out what you need to know in our latest roundtable.

Q: As we prepare for the Sweet 16, how are you feeling about the team you picked to win it all?

Eli Boettger: I would say I’m slightly more convinced that Gonzaga is going to win the national title as opposed to when the tournament started. The Bulldogs remain as close to perfect as possible and the team that most believed could potentially hand Mark Few’s team a loss in Illinois was eliminated in the second round. However, I do expect Creighton to make things interesting in the Sweet 16, especially since the Bluejays haven’t really shot the ball all that well yet in March and it’s hard to imagine that will continue much longer.

Brian Rauf: Great! I picked Gonzaga like a smart person and they’re continuing to roll. They’ve passed every test they’ve faced this season and have continued dominating on both ends.

Andy Dieckhoff: I mean … this season? In this tournament? Gotta say, there’s a bit of worry creeping in that we’re going to see March Madness creep into April Anarchy. After watching USC and Oregon dismantle Kansas and Iowa, respectively, with as much ease — or more — than Gonzaga did when they played those teams months ago, it does give me a little pause about the Zags’ invincibility. Keep in mind, none of those impressive high-majors on Gonzaga’s early schedule made it to the second weekend. I do ultimately think Mark Few cuts down the nets, but the homestretch won’t be easy.

Lukas Harkins: Gonzaga continues to look great in advance of the Sweet 16 and it is hard to be anything other than confident. While Creighton represents a possible threat with their high-powered offense, the Bulldogs have given me no reason to doubt them so far this year. This is Mark Few’s best roster and anything short of a national championship would feel disappointing — that’s how good they have been. The NCAA Tournament is always full of surprises, but it is starting to feel like the whole season has been leading up to a Gonzaga/Baylor title game.

Q: Through two rounds, what has been the biggest surprise of the NCAA Tournament in your eyes?

Eli Boettger: I’m going to go with Oregon State. It can’t be repeated enough that the Beavers entered the season picked dead last in the Pac-12 while trying to find a way to replace the school’s all-time leading scorer. Wayne Tinkle’s team also started 1-3 against D-I teams with losses to Washington State, Wyoming and Portland. OSU’s last five games? Wins over UCLA, Oregon, Colorado, Tennessee and Oklahoma State. It’s truly remarkable. Guard Jarod Lucas is a star in the making.

Brian Rauf: Oral Roberts, obviously, but also the Pac-12. None of the five teams that made the field entered the Big Dance with a winning record against tournament teams and none had a top tier nonconference win. There was no indication anything like this was coming.

Andy Dieckhoff: A lot of noise has been made about how bad the Big Ten has performed in the tournament, but honestly, I’m a little more surprised by how the Big 12 fared. I never truly bought into Kansas or Oklahoma, but I was convinced that Texas and Oklahoma State were set up for relatively easy walks into the Sweet 16, if not further. As it stands, Baylor is the only one left standing, which is not a surprise at all. I just figured they’d have some company from their own cohort.

Connor Hope: Oral Roberts, the Pac-12, and the Big Ten are all up there, but the complete disappearance of Scottie Barnes has to be it for me. I understand that he is not the top option for the Seminoles, but the fact that a 6-9 point guard could be shooting 100 percent from the field and only getting two shots a game is mind-blowing to me.

Lukas Harkins: I was admittedly high on Oral Roberts entering the NCAA Tournament and thought they had a good chance at an upset in the opening round. With that said, I would be insane to say they aren’t a surprise in the Sweet 16. But I’ll admit that I was also taken by surprise by the Big Ten’s struggles. It wasn’t crazy to think that every top team had its flaws entering the Big Dance, but basically all of them losing was a shocker. Michigan is now the only representative of the conference remaining.

Q: Which double-digit seed(s) do you expect will continue their run of success?

Eli Boettger: Syracuse seems like the safest bet. Jim Boeheim has more coaching experience than anyone else in this field and the Orange are ridiculously dangerous when the shots are falling from the perimeter. Boeheim’s vintage 2-3 zone defense still seems to give otherwise talented teams plenty of challenges.

Brian Rauf: Syracuse is the most likely. Their zone continues to give teams fits and Buddy Boeheim has been on another level. The Orange also get a shorthanded Houston team in the Sweet 16.

Andy Dieckhoff: I’m too superstitious to put my true thoughts in writing here, so I’ll go with UCLA. Alabama has been an absolute roll, but Mick Cronin’s team is much better than their No. 11 seed would indicate. The Bruins lost the plot for two disastrous weeks, but they appear to be back. UCLA just solved the Rubik’s Cube of the Abilene Christian defense, so if the Tide’s three-pointers aren’t falling, this game could be one to keep an eye on.

Connor Hope: Syracuse is the only double-digit seed I have winning their next game. Between Houston’s issues and Buddy Boeheim’s emergence, I just trust them to continue their run into a matchup with Loyola.

Lukas Harkins: I don’t think any of the remaining double-digits seeds will reach the Elite Eight, but the most likely are Oregon State and Syracuse. For the Beavers, they are as hot as any team in the country and could be able to pull off another upset or two. I think Loyola is the better team but it’s hard to overlook how well Oregon State has played for the past couple of weeks. As for Syracuse, their zone is so difficult to prepare against, even though Houston has had several days to prep. Additionally, Buddy Boeheim has been playing as well as anyone.

Q: If you had to choose right now, who has been the Most Outstanding Player of the tournament?

Eli Boettger: If UCLA can take down Alabama, I think Johnny Juzang needs to at least be in the conversation. While he still might not be the biggest name and could be a bit of an outsider from the national lens, his productivity in the tournament has been impressive. Juzang dropped 23 against Michigan State in the First Four, led the Bruins with 27 in the upset win vs. BYU, and guided Mick Cronin’s team in scoring again with 17 vs. Abilene Christian’s stingy defense. That’s 22.3 points per game and three tourney wins for a guy who averaged 2.9 points with Kentucky last year.

Brian Rauf: Kevin Obanor. He’s leading the tournament in scoring and has hit most of the big shots for Oral Roberts, who has been the tournament’s biggest surprise. That’s a recipe for MOP.

Andy Dieckhoff: Buddy Buckets, baby! There are probably better answers honestly, but come on. The coach’s kid has hit 13 three-pointers in two games and is doing it at a 56.5 percent clip! Those performances, in which Boeheim totaled 55 points, propelled the Orange past two very good teams in San Diego State and West Virginia. While I totally get the love for Mobley and Obanor, I give the edge to Boeheim based on his having played the toughest pair of opponents of the group, in my view.

Connor Hope: Evan Mobley is it for me. I understand he is not the biggest scorer in the tournament, but the impact has had on all parts of the game is ridiculous. He is on a 2012 Anthony Davis type run right now, and has a chance to not only make the Elite Eight, but also make history by downing the Gonzaga Bulldogs.

Lukas Harkins: There are really a ton of options right now. Justin Smith is my dark-horse answer; he has recorded 49 points, 21 rebounds, three assists, three blocks, and five steals across two games to lead Arkansas. Evan Mobley has perhaps been the most impactful by posting 27 points, 24 rebounds, seven assists, and six blocks in his two games thus far while USC has looked dominant. Additionally, Jeremiah Robinson-Earl has emerged as Villanova’s go-to star while flashing excellent passing ability; Max Abmas and Kevin Obanor have dominated for Oral Roberts; Buddy Boeheim has been scorching hot for Syracuse.

Q: What are you looking forward to most this weekend?

Eli Boettger: Pretty much everything. There are so many great storylines that have come out of this tournament already, and it starts with Oral Roberts’ Sweet 16 run as a No. 15 seed. Paul Mills and his dynamic duo of Max Abmas and Kevin Obanor have been tremendous and the ORU squad has come up with the necessary stops to win games. Elsewhere, Gonzaga continues its pursuit of perfection, the Pac-12 is attempting to make history and Loyola Chicago is hoping for a return trip to the Final Four. This tournament has been nothing short of tremendous.

Brian Rauf: More basketball! I’m still trying to enjoy every minute we get after last season’s cancellation. Plus, the matchups are getting really, really good. There should be a lot of high-level basketball played.

Andy Dieckhoff: Getting to watch my hometown team and first sports love continue playing in my favorite sporting event. Honestly, this Oregon State run has been so much fun and it has really come out of left field, like all good stories in the Cinderella vein. Who knows how long it continues; that’s not up to me. All I know is that this is the most magical Beaver basketball season I’ve ever witnessed, and I’m chomping at the bit to see how it all ends.

Connor Hope: Figuring out who will be playing in April. I hope that by midnight on Tuesday, we will know that the national championship that everyone wants is still on the table for the following Monday.

Lukas Harkins: Some of my favorite teams in the entire country are still in action and I cannot wait to keep watching them play: Gonzaga, Oregon, Alabama, Arkansas, and Loyola-Chicago. Regardless, I am just excited to watch more basketball — it is so great to have March Madness back after missing last year.