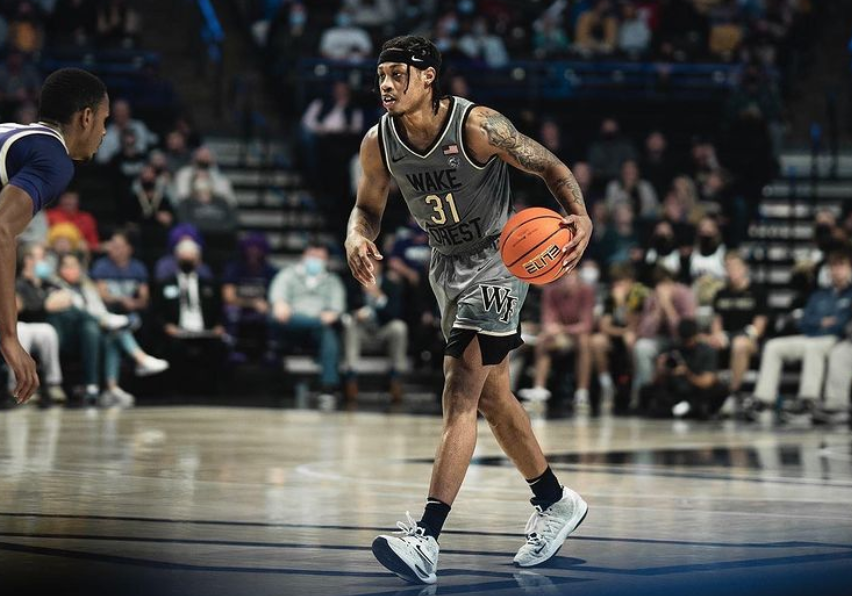 The 5,000 or so spectators inside the Spectrum Center’s lower level knew who Wake Forest would turn to in the closing seconds.

After blowing a 19-point lead, the Demon Deacons had 22 ticks to finish off Charlotte in their Hall of Fame Shootout matchup.

Alondes Williams, the reigning ACC player of the week, had already scored 34 points. He was easily the best player on the floor.

“We wanted to make it really tough on him,” Charlotte head coach Ron Sanchez told Heat Check CBB. “We knew how talented he was, he has size, is a really good athlete, and he can really pass the ball. Our plan was to make it tough difficult for him.”

Of course, Wake Forest inbounded the ball to Williams, who stood with the ball under his left arm until the clock drained to eight seconds. Wake senior center Dallas Walton reset a high ball screen, and Williams took it downhill to the basket. He rose, turned his body to the basket, and … kicked it out to a teammate. Open in the corner was senior Isaiah Mucius, who splashed the 3-point attempt from the corner as the final buzzer sounded.

“On time and on target,” Wake Forest head coach Steve Forbes said. “Good passes lead to good shots. I have been saying it for the longest about Alondes; he is an excellent passer and so unselfish. That is what a great player does, he draws the defense, and he makes the right read.”

This offseason, Forbes knew he needed to revamp his roster. He brought in nine new players — five freshmen, three graduate transfers, and an undergrad transfer. This new blood infused into the program has changed the trajectory of Wake Forest, which had struggled mightily the past three seasons.

Forbes targeted players from winning programs. Among them was Alondes Williams, a graduate transfer who helped Oklahoma to the second round of the 2021 NCAA Tournament, averaging 6.7 points, 2.8 rebounds and 1.3 assists in 14 starts and 18.5 minutes per game last season.

“He comes from a great program,” Forbes said. “(Alondes) played for a coach who is way better than me with Lon Kruger. He is well-prepared and works hard.”

Oklahoma changed coaches this offseason when Kruger retired. Williams’ four years of college eligibility had expired, but he had an opportunity for a fifth year due to the COVID extension. He entered the portal and went through the transfer process.

“I wanted to get to know the coach,” Williams said. “My relationship with the coach has always been big for me. The coach at Oklahoma (Kruger) was cool, he respected me and was a smart guy, but I needed a new environment when he left. Coach (Steve) Forbes and I quickly built that connection. I had a great connection with Coach (Steve) Forbes. We both came from JUCO; we both came from the bottom; he was just cool. And this school and my role was a better fit for me to go to the NBA.”

Williams needed a change, too

Williams came to Wake Forest as the ‘old guy’ who has been there and done that. It’s a new role for Williams, but one that he was ready for when he arrived to Winston-Salem.

“My mindset has changed a lot,” Williams said. “Being an older guy, being a leader with the young guys looking up to me, I had to change my mindset. I had a great leader last year in Austin Reaves; he was a good teammate and a great person at that. So I just brought it over from him to here. It is big.”

Not only has Williams been the leader of this surprise start, but he has also been the Demon Deacons’ best player. Currently, Williams is second in the ACC in scoring at 21 points per game. In his previous two games, Williams poured in 36 and 34 points, respectively.

“Alondes has been a lot to this start because he can do so many things,” Forbes said. “He threw some passes tonight that were incredible; he’s thrown some great passes this season, some of the best I have seen in 33 years. I understand he is scoring the ball, but he does so many things. He is out there getting rebounds.”

With Wake’s start to the season, Williams is off to his own historic pace. As of this writing, Williams is the only player in college basketball averaging 20 points, 6.5 rebounds and 4.5 assists. If he continues on his current trend, he will join Penny Hardaway, Trenton Hassell, Ricky Minard and Evan Turner as the only players to average such numbers in the last 30 years.

Williams’ presence on the team goes beyond his counting stats. Williams joins Indiana’s Trayce Jackson Davis as the only players in D-1 with a PER over 30, a box plus/minus over 10, and a usage percentage over 25.

“I am a slashing facilitator,” Williams said. “Like a Magic Johnson, but I ain’t going to force that. I can finish, get into the paint whenever I want. But I am a facilitator.”

Mucius, Friday’s hero, reiterated that thought: “[Alondes] is an unbelievable passer; he has such good vision and he delivers on target.”

When diving into a player’s on-court value, the eye-test tells a story. However, analytics peel back further layers.

Synergy, a web-based analytics and scouting tool, supports Williams’ notion as a scorer and a facilitator. Williams has scored 1.129 points per possession this season, which grades out as ‘excellent’ on Synergy’s grading scale. Williams has also done well as a pick-and-roll ball-handler, scoring 1.14 points per possession when defended in single coverage, graded as ‘excellent.’

“The thing I love about Alondes is his unselfishness and ability to pass the ball,” Wake Forest assistant coach BJ McKie said. “Everyone knows he’s athletic, probably one of the better athletes in the conference. His shot is coming around; he has shot it well this season, but his ability to pass and see the floor has really stood out.”

Sanchez agreed with McKie: “He gets downhill and he’s strong. Defenders kind of just bounce off him. To his credit, he did a lot of good things. He made contested shots; made them on our switches. He made plays.”

“My role is to be a great leader,” Williams said. “Push the guys every day with our goal to get to the tournament. I think we could be great; we got the pieces to make a run in the tournament.”

McKie furthered Williams’ thought: “I’ve seen a lot of leadership out of Alondes. He is a guy that came in ready to work and has taken on a bigger role on this team. Alondes has been proven on an NCAA Tournament team, and he wants to win. He has really worked hard and has earned himself everything he is getting.”

The buzz from media, spectators and NBA scouts was notable after Wake’s thrilling victory to finish nonconference play at 11-1, thanks in large part to the heroics from an unselfish, budding star in Alondes Williams.