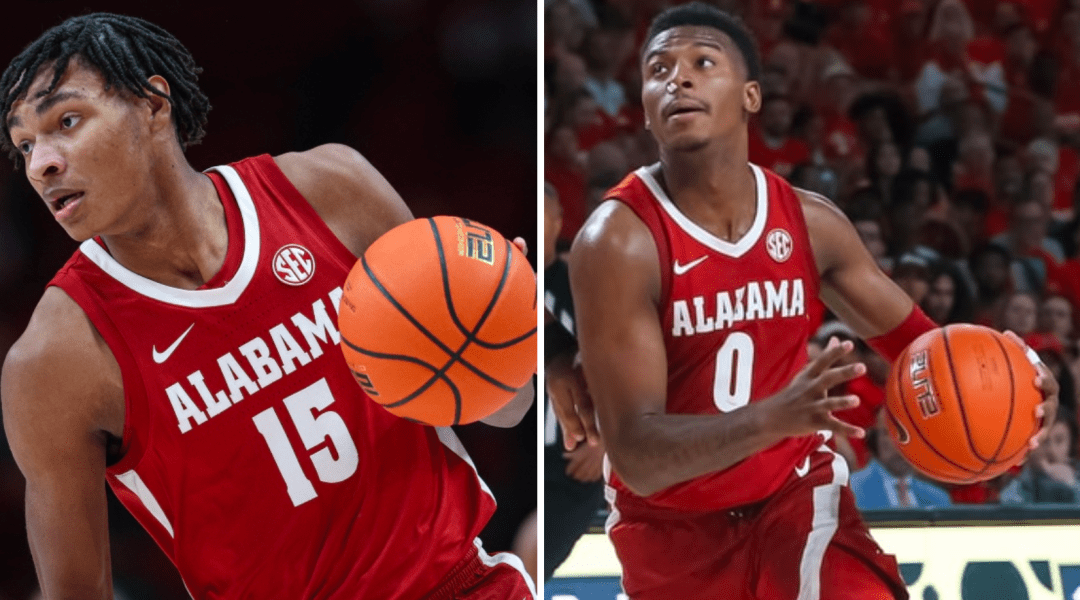 A rising tide lifts all boats, as the saying goes.

But you need a full-on armada to rattle off wins against two different No. 1 teams in the same season. And yet, that’s exactly what Alabama has done in these first five weeks. In November, it toppled North Carolina in a four-overtime slugfest in the Phil Knight Invitational. Next came Saturday’s road triumph at Houston — a win that will stand among the most impressive of the year.

Freshman Brandon Miller has captured headlines all season, and for good reason. The 6-9 power wing poses matchup problems for every Alabama opponent with his iso scoring and 3-point marksmanship. Miller leads all D1 freshmen in scoring at 18.5 points per game.

But he’s not the only Crimson Tide rookie making waves.

For example, Noah Clowney — not Miller — was the story against Houston. The first-year forward has been a revelation for Nate Oats and Co., averaging 9.6 points, 8.4 rebounds and 1.5 blocks per contest. Remarkably, Clowney is producing at a high level despite barely ranking in the top 80 of his high school class.

But rest assured, no team will overlook him after Saturday night’s performance. The 6-10 Clowney matched Houston’s physicality and put his mark on the game with rugged work on the glass. Rarely do opponents out-rebound the Coogs, but Bama accomplished that feat on the back of Clowney’s 11 boards. And none was more crucial than his offensive rebound with 1:18 remaining. He scored on the put-back, giving him 16 points for the game and his team a lead that it never relinquished.

“Our coaches made [rebounding] a point in practice, telling us we can’t miss box-outs,” Clowney told me. “So I took that as a challenge. I don’t think [Houston] had played against someone who crashes the offensive glass like we do. And I think we’re the best rebounding team in the country.”

Additionally, Clowney’s gravity on the roll creates space for the Tide’s shooters and leads to easy looks at the basket. He leads Alabama in field goal percentage at the rim (73.3, minimum 20 attempts, per Hoop-Math) and is second on the team in dunks (nine).

While his offensive game is not especially flashy, Clowney is okay with that. “I can be a great offensive rebounder,” he said. “[Besides that], I’m just trying to make open shots and get the offense going.”

On the other end of the floor, his impact can be felt even more noticeably. Clowney flaunts strong instincts, a surging motor and exceptional mobility for his size. Combine all of those traits and you get a devastating pick-and-roll defender:

In keeping with his splash plays, Clowney ranks ninth among SEC players in block rate, per KenPom. He added three more swats in Tuesday’s win over Memphis to go along with 11 points and nine rebounds.

Fellow freshman Jaden Bradley has also impressed for the Tide. The 6-3 point guard manufactures paint touches, collapses defenses and finds open teammates with ease. In particular, his expertise in drive-and-kick opportunities opens the floodgates for Alabama’s long distance shooting. Per Hoop-Explorer, the Crimson Tide is shooting 37.2 percent from deep with Bradley on the floor, contrasted to 32.9 percent when he is off. (He has only attempted five triples on the season, for context.)

Even when he doesn’t get into the lane, he still uses his vision to create for teammates. See the following clip against Houston: the Coogs must account for Charles Bediako (14), due to Bradley’s pick-and-roll acumen. Reading the defense, he counters by nailing a gorgeous skip pass to Nimari Burnett (25).

And this selfless style of play seems contagious — Alabama’s assist rate is up 57 spots nationally (61st) from last season. Of course, Oats has emphasized buy-in from the jump. He gave a particularly telling quote to The Almanac this past summer:

Safe to say his guys are responding.

“Everyone on my team is capable from top to bottom,” Clowney said. He was quick to spotlight others when asked about his heroics against Houston, not seeking any personal glory. “We just play for each other every night.”

As Alabama rises in the polls, questions about its national title prospects will accompany its ascension. But interestingly enough — for a team that relies so heavily on one player — it seems oddly balanced. Maybe it’s Clowney relishing in the dirty work. Or Bradley’s pass-first nature. Or even veterans like Jahvon Quinerly accepting their roles. Less than two months into the season, the team already resembles a cohesive unit. All boats lifted, indeed.

A condensed version of this article originally ran in the Dec. 12 edition of The Field of 68 Daily.