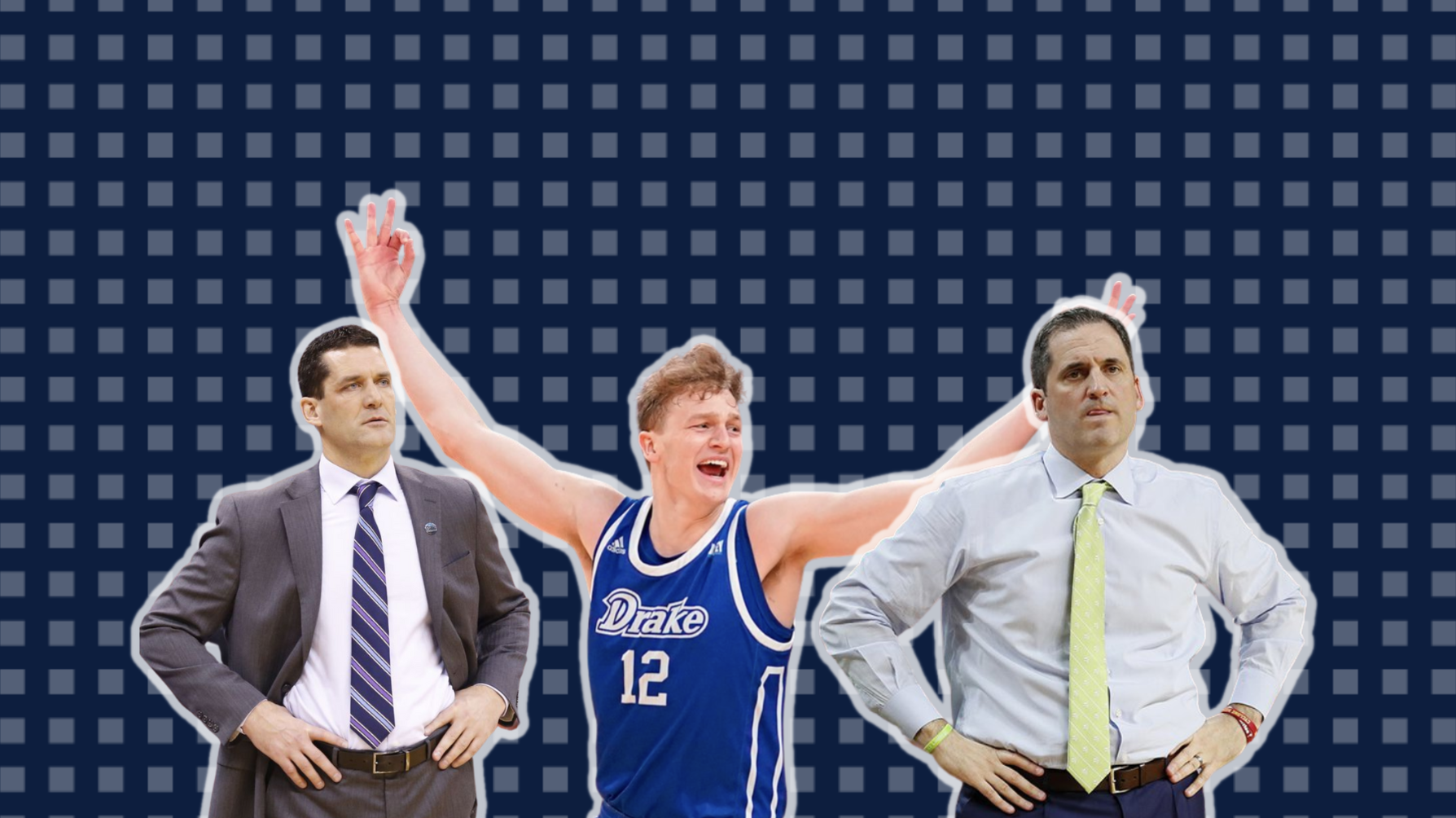 Missouri Valley basketball is undergoing several changes. How does the league appear to be projecting for the 2022-23 season amidst program, coaching, and roster turnover?

Missouri Valley basketball is entering a new era. Loyola Chicago, winners of the conference’s regular-season title in three of the last five years, has departed to the Atlantic 10. But the MVC has responded by adding three new members: Former OVC powerhouses Belmont and Murray State are on the way while UIC is joining via the Horizon League.

Additionally, much of the talent corps for returning programs left either due to graduation or the transfer portal. The entire All-MVC First Team from last season is gone. As a result, there could be substantial changes in the hierarchy of the league. Drake, which will feature three of the only seven all-conference returners, is expected to be the favorite, but others could be in the mix.

Coaching changes also dot the conference. Illinois State and Evansville turned to longtime assistant coaches with Midwestern roots for their open head coaching positions. The Redbirds hired Ryan Pedon after spending the last several seasons as an assistant at Illinois, Butler, and Ohio State. The Purple Aces turned to a local product in Evansville native David Ragland, who was an assistant coach for Butler last season. Both are entering their first Division-I head coaching seasons.

The Missouri Valley will look very different next season but should still remain one of the better mid-major conferences. While it may be difficult to project this league so early amidst rampant roster turnover, but why not give it a shot?

12. Evansville: New head coach David Ragland carries an excellent reputation and is an Evansville native. He has to dig the program out of a major hole, though. As a late hire, Ragland also doesn’t have much time to improve the roster. Can Blaise Beauchamp take the leap into stardom? What will be the first steps be in developing a much-needed culture for the Purple Aces?
11. Illinois State: Ryan Pedon, another first-time head coach, will have his hands full after Antonio Reeves, Sy Chatman and Josiah Strong all transferred this offseason. A rebuild might take some time given that the Redbirds went just 30-59 over the last three seasons of the Dan Muller era. In terms of incoming talent, Coach Pedon is bringing in Seneca Knight, Darius Burord and Colton Sandage — among others. Liam McChesney and Kendall Lewis are the intriguing returners.
10. UIC: The Flames, led by head coach Luke Yaklich, are entering their first season in the MVC. They went just 14-16 (9-10 Horizon League) last season and then lost their top scorers this offseason. New-look UIC added some vital transfers to lead the way this year: Tyler Stevenson, Trevante Anderson and Toby Okani. Their top returnees include rising sophomores Jace Carter and Filip Skobalj.
9. Valparaiso: Already a two-time All-MVC selection, Ben Krikke is back to lead Valparaiso. He will likely be joined in the frontcourt by JUCO transfer Jerome Palm. Perhaps a rising player to note could be sophomore Preston Ruedinger; he started 13 of 19 games last season. The Beacons also have a pair of Wisconsin freshmen in Cam Palesse (redshirted in 2021-22) and Maximus Nelson to add shooting.
8. Indiana State: Third-team All-MVC honoree Cooper Neese is returning for another season and will lead the way for the Sycamores. Running mates Cameron Henry and Xavier Bledson are back in the mix as well. Former Division II star Courvoisier McCauley transferred back to the state after a two-year stint at DePaul. The Sycamores should have more offense, something desperately missing last year.
7. Belmont: Belmont is a well-respected program but experienced significant roster turnover in advance of its first MVC season. Ben Sheppard should be an all-conference selection but there are questions around him. The Bruins might need a freshman guard to thrive to contend for the conference title. Head coach Casey Alexander knows how to win, though, and the program tradition is noteworthy.
6. Missouri State: Losing Gaige Prim and Isiaih Mosley is gut-wrenching. Yet, the Bears still have a talented core as Donovan Clay, Kendle Moore and Bryan Trimble are all potential double-digit scorers. JUCO transfer Jonathan Mogbo also averaged a double-double at Northeastern Oklahoma A&amp;M last year. Former four-star recruits Chance Moore and James Graham also raise the talent level in Springfield.
5. Murray State: Steve Prohm is returning to Murray State’s sidelines where he went 104-29 over four years to begin the last decade. In his first year back at the helm, he will need to overcome significant roster turnover to contend in the MVC. DJ Burns is the main core returner from last season. Of the many new faces heading to the Racers, transfer additions Rob Perry and JaCobi Wood are among the most exciting. Can Wood rediscover his freshman form?
4. Northern Iowa: AJ Green departing is a huge loss but there is still a fair amount to like with UNI. Bowen Born and Nate Heise are an intriguing duo to lead the way. If Austin Phyfe can return to his prior healthy form, that would be a huge development. There is a lot of young talent in Cedar Falls.
3. Southern Illinois: Marcus Domask, a two-time All-MVC performer, is one of the top returning players in the conference. Xavier Johnson will provide the Salukis with another playmaker alongside Lance Jones. A pair of freshmen coming off redshirts could be critical: Scottie Ebube (6-10) adds significant size to the frontcourt while Foster Wonders will aid in boosting what was a slow offense last year.
2. Bradley: Bradley has finished at least .500 in conference play in four of the last five seasons, and should do so again — even without Terry Roberts. Rienk Mast, Malevy Leons, and Connor Hickman form a strong returning core to build around. Troy transfer Duke Deen is a hugely underrated addition; the Sun Belt Freshman of the Year will provide necessary playmaking in Roberts’ absence.
1. Drake: Head coach Darian DeVries brings four double-digit scorers from a team that finished tied for second in the league last season. Garrett Sturtz, Roman Penn and DJ Wilkins are an experienced trio to support stud sophomore Tucker DeVries. The Bulldogs likely have the best coach and player in the conference. A fifth straight 20-plus win season should be on the horizon in Des Moines.

The OVC newbies: Belmont and Murray State carry tremendous track records as the powerhouse programs from the OVC over the past few years. Both are entering their first seasons in the MVC and dealt with roster turnover this offseason. The Bruins lost a trio of stars while the Racers’ entire roster seemingly hit the portal after a coaching change. They are upgrading in conference affiliation, but it still feels disrespectful to place both teams outside of the top four in the league. If their new collections of talent come together quickly, either could contend for the title. Belmont has a proven star in Ben Sheppard while Murray State has a balance of new talent.

Connor Hickman, Bradley: Hickman is already a known name in the Missouri Valley after making the league’s All-Freshman Team last season. But with Terry Roberts transferring, he should become a bigger piece of Bradley’s offense. He averaged 6.8 points per game as a freshman, a number that could double this year. Hickman shot 9-for-14 from three over his final three games of 2021-22 (39.1 percent for the season).

Michael Duax, Northern Iowa: The Panthers return a pair of proven contributors in Heise and Born for this season. To contend for the MVC title, though, one of their three freshmen coming off redshirts likely needs to be a big contributor. Michael Duax, a 6-5 wing, appears to be the prime suspect with his combination of size, athleticism and slashing ability. He can add a different dimension to the wing for Coach Jacobson. Expect him to play a big role for a young Panthers’ team.

Drew Friberg: Belmont: Belmont runs an extremely efficient offensive system that prioritizes 3-point shooting and effective finishing at the rim. This past season, the Bruins ranked 49th in 3-point attempt rate and tops in 2-point percentage. Adding Princeton transfer Drew Friberg makes perfect sense. The 6-6 forward posted 9.3 points per game last season while shooting 72-for-179 (40.2 percent) from three. He led the Ivy League in points per possession while shooting 45.1 percent from distance in league play.

Tucker DeVries, Drake: You mean to tell me that there is a coach’s son who spurned better offers to be one of the MVC’s best players? Tucker DeVries, son of Darian DeVries, appears poised to follow in the footsteps of Doug McDermott and AJ Green. The 6-7 guard is fresh off winning MVC Rookie of the Year and was a Second Team All-Conference selection. He averaged 13.9 points per game in his first season and will be the star of the MVC favorite as a sophomore.