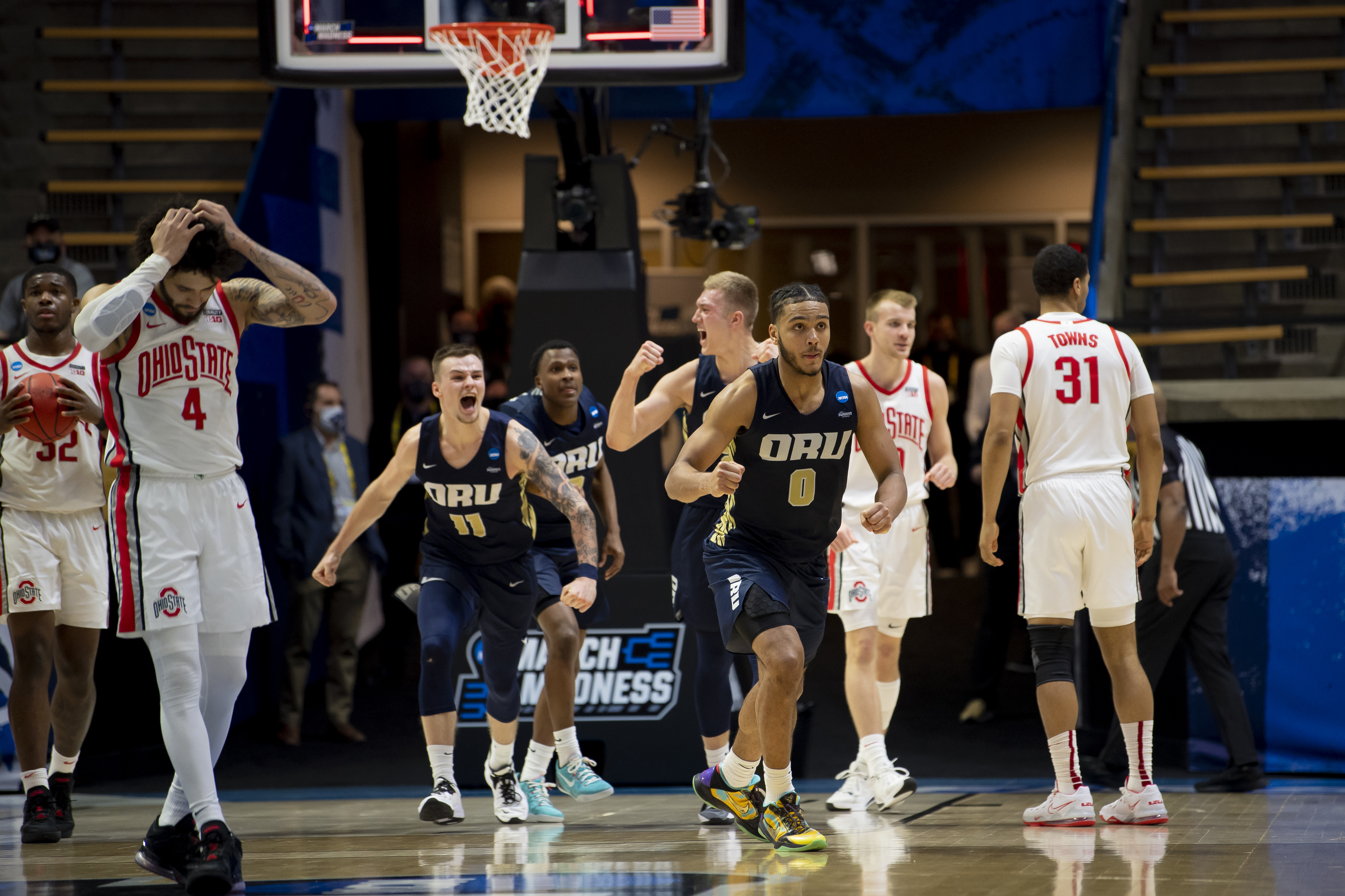 UCLA’s Johnny Juzang and Oral Roberts’ Max Abmas are among the 2021 NBA Draft early entrants whose decisions will have the biggest impact on the 2021-22 college basketball season.

The deadline for early entrants to apply for the 2021 NBA Draft came and went as Sunday night turned into Monday morning, giving us a final list of players who are considering leaving college basketball to pursue professional options.

Some have already made up their mind by signing with an agent that isn’t certified by the NCAA, therefore making them ineligible, or by simply indicating that they’re pursuing professional options.

Others, however, are keeping the door open for a return to the college ranks but want to go through the draft process to get a full evaluation. Players do this to see where their draft stock truly stands before deciding what to do, while others know they’re going back to school but want feedback from NBA teams on where to improve.

College basketball fans will be paying close attention to these draft candidates over the next month or so, as they can withdraw their name by June 7 and return to school.

Which of these decisions will have the biggest impact on what college basketball is or isn’t in 2021-22? Below are eight worth following.

This is the big one. One of the biggest stars of the NCAA Tournament for the way he offensively carried UCLA to the Final Four, Juzang displayed the kind of shot-making and shot-creating skills that translate to the NBA game. He has good size at 6-6, too.

Of course, if Juzang played that well all season long, this wouldn’t be a question. He certainly wasn’t bad for the Bruins — he led them in scoring with 16 points per game — but he also wasn’t on the NBA’s radar for the 2021 draft unless someone wanted to take a flyer on him in the second round. Now, thanks to his play in the NCAA Tournament, there is the potential for him to be picked as high as a late first-rounder.

UCLA is expected to be good next season with Jaime Jaquez Jr. and Tyger Campbell both returning. Mick Cronin’s squad also landed Rutgers transfer Myles Johnson, who should have a significant impact for the Bruins. But returning a scorer and player of Juzang’s ilk would put UCLA in the mix for preseason No. 1 and at the forefront of the list of national championship contenders. He could be the difference between the Bruins having just a good season and having a special one.

Speaking of having a special season, Ohio State thought it was on its way to having one before being upset by Oral Roberts in the NCAA Tournament’s first round. Liddell and Washington were the two stars who carried the Buckeyes all season, both of whom had usage rates in the top 13 in the Big Ten.

I went into detail about their importance to the Buckeyes late last season because of the load the duo collectively had to carry. And guess what? That’s not changing!

C.J. Walker is leaving to pursue professional options and isn’t returning to school, and top 50 prospect Malaki Branham is the only incoming freshman expected to make an impact (transfers Joey Brunk and Jamari Wheeler are expected to be role players).

Ohio State’s attack will revolve heavily around Liddell and Washington again, with a portion of the reason why being a necessity. If both come back, the Buckeyes will be a Big Ten contender. If both opt to remain in the draft, Chris Holtmann’s squad will be looking at a rebuilding season.

This one doesn’t need much explaining. Abmas was the nation’s leading scorer a year ago and led the Golden Eagles to the Sweet 16 — beating Ohio State on the way — to become the second No. 15 seed to ever make the NCAA Tournament’s second weekend. Rightfully, he’s testing the NBA Draft waters after a storybook season.

But, right now, he’s projected to be a second-round selection if he’s even picked at all. That normally tells prospects they should return to college, but there isn’t much Abmas can do to improve his draft stock. How can he top the season he just had?

Oral Roberts will hope he returns to showcase more playmaking and true point guard skills, a la Stephen Curry when he returned for his junior season at Davidson. If he does, Oral Roberts will be a dangerous team worth following. If Abmas stays in the draft, however, ORU will fade from the national stage.

The second of two Big Ten duos on this list, Ayala and Wiggins look like the difference between the Terrapins being a decent team and a 2021-22 Big Ten contender.

Maryland returns two other starters in Hakim Hart and Donta Scott, and also landed impact transfers Fatts Russell (Rhode Island) and Qudus Wahab (Georgetown). That’s a solid nucleus that can win games and challenge for an NCAA Tournament berth but adding Ayala and Wiggins to the mix would give the Terps the talent, depth, and backcourt versatility to contend with the best teams in the country.

Neither is currently projected to be drafted, but Maryland fans will be anxiously awaiting final world.

That goes for Darryl Morsell, too. The reigning Big Ten Player of the Year entered both the NBA Draft and the transfer portal this offseason, sending signals that he’s not returning to Maryland for a fifth year. But he does have the option to return, and that could take the Terps to yet another level.

Let’s stay in the Big Ten with Michigan, who won the conference’s regular-season crown. Big man Hunter Dickinson played a major role in UM doing so and is projected to be an even bigger focal point in head coach Juwan Howard’s attack as a sophomore.

His return was thought to be a given, so it was a bit surprising to see him declare for the draft shortly before the early entry deadline. Dickinson is still expected to return to Ann Arbor, but you never know how these things will go.

If he does return, joining Michigan’s strong group of returners and top-ranked incoming recruiting class, the Wolverines could be the class of the Big Ten again. If Dickinson elects to remain in the draft, there will be a sizable hole in the middle of Michigan’s lineup.

If you read anything I wrote last season, you probably know how big of a fan I am of McBride’s game and how important he is to West Virginia’s attack on both ends of the court. So, the fact that the Mountaineers have already lost star big man Derek Culver — who signed with a non-NCAA certified agent, ending his collegiate career — makes McBride even more important for WVU.

Yes, Taz Sherman and Sean McNeill are also in the draft’s pool of early entrants, but both are widely expected to return. Neither is a star, however, and West Virginia needs a star if it wants to compete in a loaded Big 12.

McBride is the only one who can be that guy, making his decision one of the most impactful left to be made.