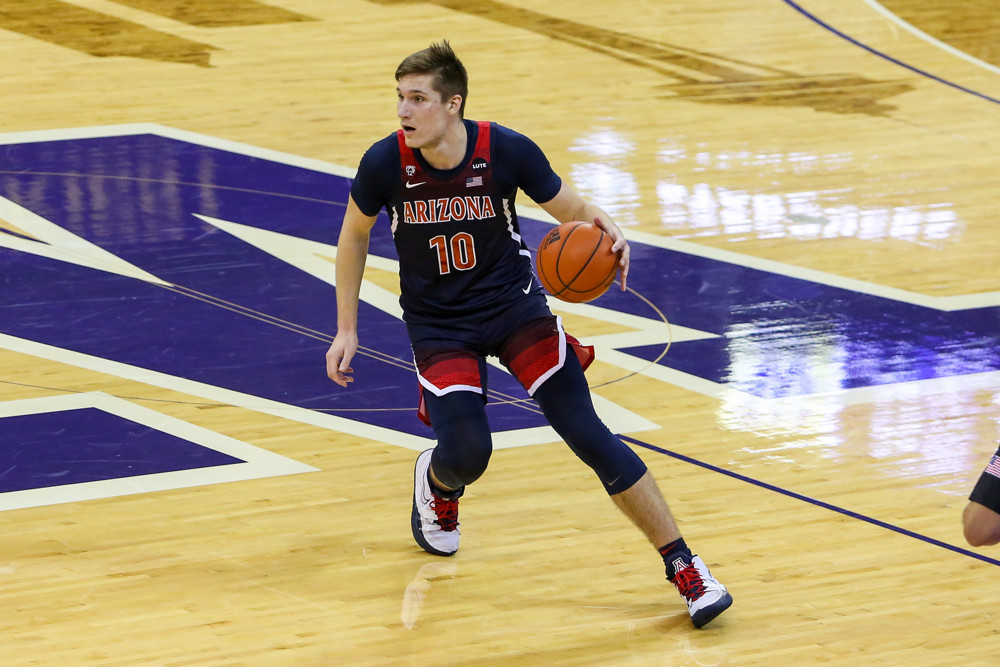 Tommy Lloyd arrives at Arizona basketball with a global reputation. How might his internationally led roster perform in Year 1?

Newly hired Arizona basketball head coach Tommy Lloyd arrives in Tucson this offseason boasting an elite reputation. He already has 20 years under his belt as an assistant coach at Gonzaga, one of the nation’s best programs during that stretch. While being promoted to a head-coaching job will involve a transition period, Arizona is loaded with talent that fits Lloyd’s preferences.

As far as the 2021-22 roster is concerned, the Wildcats’ basketball borders extend far beyond the state’s 114,000 square miles.

With eight international players in tow, Arizona is as diverse as any team in America. Tommy Lloyd will feature players from Canada, France, Sweden, Lithuania, Estonia, Cameroon and Mali. The 2021-22 roster combined to play 4,697 collegiate minutes last season for their respective teams; 56.5 percent of those were played by international players.

With this much overseas talent taking the court, Arizona’s games could look like the basketball version of golf’s Presidents Cup.

Working with international prospects is not a foreign concept (get it?) for Coach Lloyd. Recruiting outside of the United States was arguably his chief specialty while at Gonzaga. He aided in the acquisition and development of players such as Kelly Olynyk, Rui Hachimura, Domantas Sabonis, Filip Petrusev and Joel Ayayi — among many others — during his years in Spokane. Mark Few often noted Lloyd as a primary reason for the Bulldogs’ international success.

Looking ahead to Tommy Lloyd’s first season as a head coach, let’s take a deeper dive into his roster to determine Arizona’s potential.

Tubelis reigns as Pac-12 Freshman of the Year

First and foremost, you would be hard-pressed to find many frontcourts in the nation as talented as Arizona’s. The Wildcats bring back some key pieces, including the reigning Pac-12 Freshman of the Year, Lithuanian forward Ąžuolas Tubelis, who posted 12.1 points and 7.2 rebounds per game last year.

Tubelis finished in the Pac-12’s top 20 in minutes percentage, percentage of possessions and shots, effective field goal rate, true shooting percentage, offensive and defensive rebound rates, block rate, fouls drawn rate and 2-point percentage. With that level of efficiency, it is easy to see how the big man was a major reason Arizona finished 29th on KenPom.

After his tremendous first year, Tubelis starred for Lithuania at FIBA U19 this summer. He averaged 16.6 points, 8.9 rebounds and 2.9 assists in 29.2 minutes per game. Now entering his sophomore year, he should remain a focal point of Arizona’s attack. As a 6’11” stretch-4, Tubelis bolsters Arizona’s intense positional size in the frontcourt alongside seven-footers Christian Koloko and Oumar Ballo.

Speaking of FIBA stars, while Tubelis mans the 4 for Lithuania, Bennedict Mathurin is poised to hold down the 3 for Team Canada. At 6-foot-7, Mathurin is a fluid three-level scorer with an NBA body. He showed incredible flashes last season, averaging 10.8 points and 4.8 rebounds per game as one of the nation’s most underrated freshmen.

Mathurin’s highest-scoring games during his first year in Tucson were 31 points (vs. Oregon State), 24 points (vs. Washington State) and 22 points (vs. Colorado). When he gets it going, he is very hard to stop.

Just look at Mathurin’s ridiculous efficiency in 2020-21, per BartTorvik.com:

According to KenPom’s player comparison feature, Mathurin’s freshman year was most similar to those of Khris Middleton, Jacob Evans, Vic Law, Anthony Brown and Wesley Iwundu. That is not a bad group to be mentioned alongside. All of them played NBA minutes after college, and Mathurin will soon do the same.

He was also excellent at FIBA U19 this summer while guiding Canada to a bronze medal. He torched defenses to the tune of 16.1 points per game. There’s a strong argument to be made that he will be Arizona’s best player this season.

Arizona’s international flair does not stop at its two biggest stars. Coach Lloyd will also likely feature four other foreign players in critical roles, two of whom are likely to fill starting spots around Tubelis and Mathurin. Christian Koloko (Cameroon) is a dominant interior defensive presence while Kerr Kriisa (Estonia) figures to hold down the starting point guard spot.

Koloko started 19 of 26 games for Arizona last season, mostly providing the Wildcats with elite rim protection. The 7’1″ rising junior averaged 1.3 swats per game, while his 8.8 percent block rate ranked 36th in the nation (second in the Pac-12). He is also dynamic on the offensive glass, collecting second-chance opportunities on 15.1 percent of Arizona’s misses while on the court last season. That mark ranked 18th nationally and tops in the conference.

Kriisa is arguably an even more important returner, however. With James Akinjo and Terrell Brown no longer in the fold this season, the 6-3 sophomore will move to the starting point guard spot. He averaged 5.5 points and 2.4 assists while going 14-for-38 from three. The highly touted Estonian prospect was limited to only eight appearances due to injury, though. The point guard spot is arguably Arizona’s biggest hole on paper, so Kriisa will need to make a big jump to raise the team’s ceiling.

International talent also arrived in Tucson this summer by way of the transfer market.

Pelle Larsson, a 6-5 guard from Sweden, will look to aid in Arizona’s point guard troubles. While more of a combo guard, he has solid playmaking ability. He averaged 8.2 points, 3.2 rebounds and 2.8 assists per game at Utah last season before electing to make the intra-conference transfer.

Larsson brings excellent size to the court and is a knockdown shooter. He shot 25-for-54 (46.3 percent) from three for the Utes, good for 21st nationally. He was also highly effective at drawing fouls (18th in free throw rate) and made the most of those attempts (88.3 percent FT%).

Oumar Ballo is a much different player, as he is poised to log heavy minutes in the frontcourt. The 6’10” Malian center sat behind All-Americans at Gonzaga for the past two years. He was a former Top 100 recruit in his own right, and he has plenty of ability. There’s a reason Tommy Lloyd brought him down to Tucson.

While Tubelis and Koloko are skinnier options in the frontcourt, Ballo is a monstrous force. A lack of playing time limited Ballo’s potential for a breakout in Spokane, but he should be the top option behind Koloko.

The roster also includes sophomore Tautvilas Tubelis (Lithuania), as well as freshman Adama Bal (France) from outside the states. Neither is expected to fill a major role this season but they add to the international collection.

Americans fill in the gaps

Arizona’s international core is incredible and will fit perfectly with a head coach with a penchant for developing overseas talent. With that in mind, though, the Wildcats also improved on the fringes with some stateside players. They bring back a former Top 100 recruit while also adding some upperclassmen transfers to bolster the backcourt.

Dalen Terry is a name known to Arizona fans. The 6’7″ wing is coming off a solid freshman season. He brings excellent size to the court, with a lengthy wingspan and tremendous defensive potential. Terry started Arizona’s first 11 games last season before being relegated to a reserve spot on the depth chart. He will likely reprise the latter role this year while a pair of transfers battle to start.

Though it is his first season in Tucson, Justin Kier arrives as a seasoned veteran. He averaged 9.5 points per game for Georgia last season and will be a sixth-year senior. The value of his playmaking and experience shouldn’t be underestimated. Kier can provide a lot of positive contributions.

Eastern Washington’s Kim Aiken is a similarly significant addition. The 6-7 guard/forward is coming off a season in which he averaged 11.3 points and 8.4 rebounds per game. For his efforts, Aiken was named the Big Sky’s Defensive Player of the Year. He is a Swiss-army knife type of player who can fill a variety of roles for Coach Lloyd.

Arizona is entering the Tommy Lloyd Era with a superb roster capable of making a splash on the biggest stage. While the Wildcats are not receiving a ton of preseason Top 25 love, perhaps they should be. Betting on a first-year head coach is always a dangerous proposition, but Lloyd brings a winning culture from his long-time position as Gonzaga’s top assistant.

He also boasts a roster that features rising-star talents, plenty of three-point shooting and a dominant shot-blocker. Tommy Lloyd’s reputation with overseas prospects will come in handy instantly as well. Not only is he inheriting four key international players, but he also added more of his own in just the first few months after taking his new job.

This core of global stars is set to lead the way for Arizona this season, particularly the sophomore pairing of Lithuania’s Ąžuolas Tubelis and Canada’s Bennedict Mathurin. While losing James Akinjo was a blow, Tommy Lloyd will call on European guards Kriisa (Estonia) and Larsson (Sweden) to help fill the gap. The towering tandem of African seven-footers Koloko (Cameroon) and Ballo (Mali) look to hold down the paint defensively with their elite shot-blocking.

Other key players will make their impacts throughout the season, of course. But in the way that the Dallas Cowboys were America’s Team in the 1990s, the 2021-22 Arizona Wildcats has the potential to become The World’s Team. With media expectations relatively low, can this team overachieve and smash into the (inter)national spotlight?

The pieces are there, and it seems like they hired the perfect coach to put them all together.