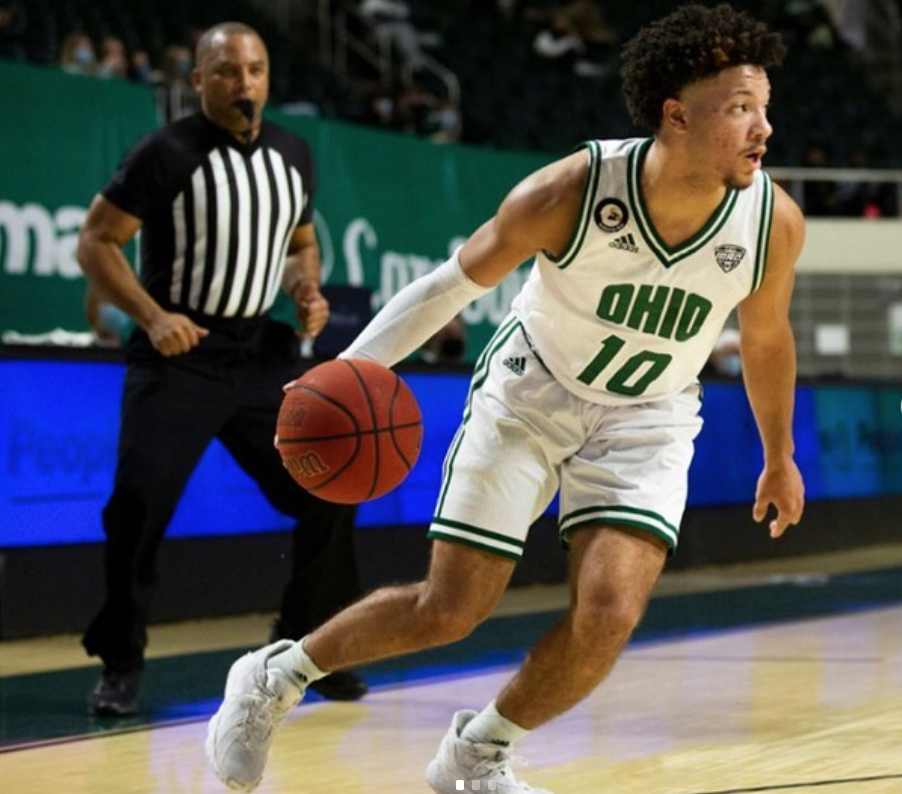 Jason Preston was one of the best stories in college basketball last year. The guard earned his scholarship to Ohio Basketball after posting his highlights on Twitter and emerged as a star in his career. Preston was the lead man for the Bobcats last season, posting excellent numbers while guiding the 40th-best adjusted offense nationwide. He parlayed that into being selected at No. 33 in the NBA Draft.

Preston’s departure obviously impacts Ohio’s potential for the 2021-22 season. Had he returned for another year, the Bobcats might have earned some fringe preseason Top 25 consideration. Without him, they will return to flying under the radar … but should they? Head coach Jeff Boals has a strong track record of success and his team is returning 80.9 percent of minutes.

Replacing Preston is easier said than done, but perhaps sophomore guard Mark Sears is up to the challenge. Sears was exceedingly impressive off the bench for the Bobcats a season ago and he will handle the reins this time around. He is set to fill the starting point guard slot on an otherwise experienced roster.

Basically every recruiting analyst foresaw Sears as a major steal for Ohio when he committed to the program. After one season, it certainly seems as though they were correct. As we look ahead to this upcoming season, how might Sears be poised to help keep Ohio basketball near the top of the MAC and in the NCAA Tournament conversation?

First and foremost, Mark Sears already proved capable of being a big-time contributor during his first season in Athens. While he was mostly tasked with backup duties behind Preston, he still put up strong overall numbers. Overall, he averaged 8.5 points, 2.8 rebounds and 3.3 assists in 19.5 minutes per game. Those were good enough for a spot on the MAC’s All-Freshman team.

He was Ohio’s best foul shooter by a significant margin, not only making the most (63) but also exhibiting the best efficiency (85.1 percent). This impressive rate for a freshman ignites optimism that his poor 3-point percentage (28.6 percent) could be remedied as his career continues. Without Preston in the picture, Sears’ importance to the Bobcats will skyrocket.

And while the jump in responsibility from role player to star is substantial, Sears performed admirably in games without Preston last season. In fact, those opportunities when he shone brightest:

In terms of overarching statistics, Sears (5.1) was second to only Preston on (7.2) on the Bobcats in BPM. His freshman season was truly excellent despite not receiving a ton of attention. Now set to be thrust into the spotlight, he could be on the verge of becoming a household name.

Sears scored efficiently during his freshman season thanks in large part to excellent ability inside the arc and at the free-throw line. His free-throw rate of 42.5 percent in conference play ranked third in the entire MAC, and his 5.2 fouls drawn per 40 minutes ranked 159th in the nation.

Considering he took advantage of those attempts with 85.1 percent free-throw shooting — in addition to 52.9 percent finishing at-the-rim — Sears is a major danger to defenses when he gets downhill.

With that in mind, though, he has room to grow as a shooter as he blossoms into a more featured offensive weapon. Sears only shot 12-for-42 (28.6 percent) from beyond the arc during his first season. However, there are statistical reasons to believe that he could be more effective from distance this time around.

For starters, free-throw percentage is often a key indicator of shooting potential. He has already proven to be highly effective in that department. Additionally, Sears shot an impressive 14-for-23 (60.9 percent) on his mid-range jumpers as a freshman. That is an admittedly small sample size, which contains some floaters, but is perhaps significant as he looks to expand his range.

Even more importantly, though, Sears is an excellent playmaker.

Jeff Boals is entering his third season at the helm of Ohio basketball. In both of those years, the team’s offense outperformed its defense in adjusted efficiency metrics. His teams also finished 60th and 23rd in assist rate nationally, respectively. Jason Preston’s playmaking certainly played into those numbers, but the Bobcats are an unselfish bunch that do a great job creating for others.

With Sears set to start at point guard this season, Ohio basketball should continue to rank highly in playmaking categories. He ranked 12th nationally among all Division-I players in assist rate last season at 28.5 percent. Sears’ turnover rate (15.6 percent) was also the lowest of those 12. Not only did he create at a high rate but did an excellent job taking care of possessions.

Sears will also have no shortage of teammates to dish the rock to on offense. Ohio was far more than just Preston this past season, and many of those same key figures are back for the 2021-22 campaign. The Bobcats return four double-digit scorers, all of whom are going to be upperclassmen this year. Perhaps most notably, Ben Roderick and Lunden McDay could take big leaps now that they will be juniors.

One of the quietest additions of the offseason was Ohio landing Jason Carter. The transfer big man started his career with the Bobcats before transferring to Xavier. He returned to Athens this summer after two seasons with the Musketeers. Carter has never played under Boals but was superb with the program in 2018-19; he averaged 16.5 points and 6.7 rebounds per game.

Carter adds another scoring presence to the frontcourt alongside Wilson and should play a sizable role. He started 51 of 53 games with Xavier over the last two years and is as battle-tested in college basketball as any. The Bobcats, on the whole, feature five upperclassmen who have all scored in double-figures for at least one full season with the program.

Mark Sears has plenty of talented pieces around him.

Ohio’s status in the MAC

Ohio’s successes last season were never just about Preston. He was obviously a star, but the Bobcats were a well-rounded veteran unit on the whole. That same core is mostly intact for this coming year, plus Coach Boals is returning a sophomore with star potential and bringing back a familiar frontcourt face. Ohio’s top six is up there with some of the best mid-majors in the country, and the program will be out for its second consecutive NCAA Tournament appearance.

The road to the Big Dance, though, is never an easy one.

Buffalo — the team that Ohio beat in the MAC title game last season — is also bringing back a bunch of talent. This includes star player Jeenathan Williams, as well as seniors Ronaldo Segu and Josh Mballa. The Bulls are likely to be the MAC’s preseason favorite this season. It is also important to watch out for squads like Toledo and Kent State.

Still, while tough challengers stand in their way, a major breakout season from Mark Sears could keep Ohio basketball atop the MAC Tournament pedestal.