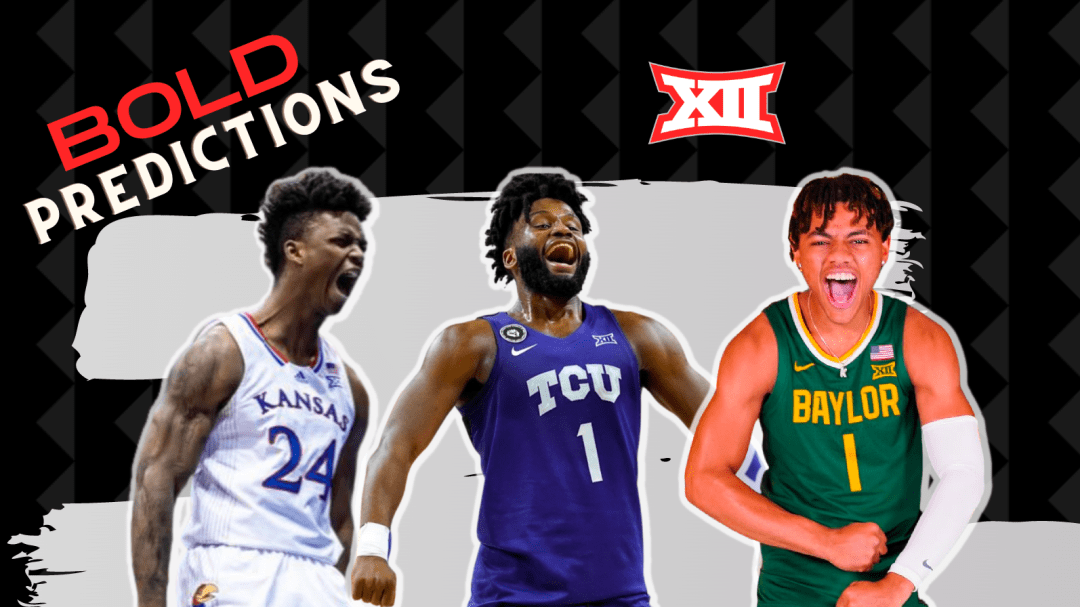 Big 12 basketball has been the nation’s best conference and is expected to lead the way once again. What might happen during the 2022-23 season?

Big 12 basketball has been the nation’s best conference for nearly a decade now, sending a majority of its membership to the NCAA Tournament on an annual basis. The conference is responsible for the last two national champions (it may have been three had the 2020 tournament taken place) and boasts five teams in The Almanac‘s preseason top 20. That number jumps to six if you include preseason No. 1 Houston, which is joining the conference next season.

With so many teams playing at such a high level, it shouldn’t be a surprise to see unexpected results. Last year’s Iowa State team is a prime example. Picked to finish last in the Big 12 in the preseason, the Cyclones started the year 12-0 and made the Sweet 16. TCU had a breakout season and was a blown call away from making the Sweet 16, while others like Oklahoma State and Texas failed to reach expectations.

What kind of unexpected outcomes might occur in the Big 12 this season? Let’s start with those TCU Horned Frogs as we dig into five bold predictions for the Big 12.

This might not be the most “bold” considering Miles is the preseason Player of the Year, but this award usually finds its home in Lawrence.

A Kansas player has won Big 12 Player of the Year six times in the last 12 seasons, including four of the last six. In five of the six years when a Kansas player did not win the award, an eventual lottery pick — Marcus Smart, Buddy Hield (twice), Jarrett Culver, Cade Cunningham — won it instead.

Those players were also the leaders for non-traditional powers that had wildly successful seasons. Culver and Hield led their respective teams to the Final Four. Cunningham and Smart both ranked top-two in the Big 12 in usage while leading Oklahoma State to 20-plus wins and NCAA Tournament berths.

TCU’s Mike Miles Jr. is the player best suited to fill that role in 2022-23. The Horned Frogs are primed for perhaps their best season ever after returning the core of last season’s team that nearly upset Arizona. Miles is a 6-2, 195-pounder who excels at getting into the lane off the bounce. Once there, he’s a dynamic threat to either finish at the rim or hit the open man after forcing the defense to collapse.

In addition to having eight 20-point games, he was the only Big 12 player to finish in the top six for points (15.2) and assists (3.8) last season. Miles is one of three returning players that were All-Big 12 Second Team selections in 2021-22, showing the amount of respect he already has from his peers.

If TCU has the season it’s expected to, Miles will play a big part. If he does, there’s a great chance he wins the award at the end of the season.

There are a lot of questions for the defending national champions. That’s always the case when a team loses four of its top five and six of its top eight scorers, but it’s a little bit different for this Jayhawks team when it comes to finding players to step up.

That’s because, well, it’s Kansas, and Kansas never has a shortage of talent.

Jalen Wilson was a preseason all-conference selection. Dajuan Harris will be in his second season as the starting point guard. Kevin McCullar transfers in after being a multi-year starter at Texas Tech. The Jayhawks have three premier freshmen in Gradey Dick, MJ Rice and Ernest Udeh Jr.

Yet I think the biggest breakout is going to come from KJ Adams Jr., an elite athlete with the tools to dominate defensively. He played under five minutes per game a season ago but made his presence felt when he was on the court. At 6-7 and 225 pounds, he can defend all five positions on the court but also has offensive versatility that indicates he’s just scratching the surface of his potential.

“He’s unbelievably athletic,” Self told The Almanac this offseason. “Style-wise, we can use him similar to how Golden State uses Draymond.”

Just about everyone on Kansas is going to get the chance for more playing time in 2022-23, especially the big men. This squad has an apparent weakness in the middle without as much size as usual. Udeh seems likely to start there almost by default; Adams’ strength gives him the ability to play some small-ball 5. The sophomore will see some time at the 4, too, and likely even the 3 given his versatility.

That versatility, coupled with his defensive prowess – always a point of emphasis for Self – should lead to Adams seeing a lot of playing time this season. I think he’ll emerge as one of the Big 12’s better players when he does.

The Mountaineers’ last-place finish in the Big 12 last season wasn’t exactly a surprise given who they were trying to replace. But I don’t think anyone expected West Virginia to go 3-15 over its last 18 games. There is still a solid base in Morgantown. Just to be sure, head coach Bob Huggins grabbed some needed top-end talent in the transfer portal.

Now, that talent has some question marks, or else WVU wouldn’t be ninth in the preseason poll. Still, I have belief that two of those newcomers – Joe Toussaint and Tre Mitchell – will combine to form one of the conference’s best duos.

Toussaint largely served in a bench role during his time at Iowa despite showing promise. The 6-foot, 190-pounder ranked top-10 in Big Ten assist rate in both 2019-20 and 2021-22. He also finished second in steal rate each of those seasons and eighth nationally in steal rate last year. A small, quick guard who can get after opponents defensively and excels at attacking downhill offensively? Sounds like the kind of guard that thrives under Bob Huggins.

Mitchell, meanwhile, disappeared in a crowded rotation at Texas before leaving the program in February. Before that, he absolutely dominated at UMass for the previous two seasons. He was a consistent double-double threat capable of scoring 30 points any given night. Mitchell should be the go-to scorer this team needs and has desperately lacked since Miles McBride.

If Mitchell displays the kind of ability he showed at UMass, he and Toussaint will be the leaders of this WVU team – which could result in the Mountaineers returning to the NCAA Tournament.

The Cyclones are coming off a surprise Sweet 16 appearance and should have an elite defense. That’s especially true after landing St. Bonaventure transfer and shot-blocking extraordinaire Osun Osunniyi. That defense is what carried them on that run last season and could keep them competitive.

At the same time, Iowa State’s offensive struggles might get worse after losing Izaiah Brockington (pros) and Tyrese Hunter (transfer). Even though the Cyclones made it to the Sweet 16, they finished 7-11 and sixth in the Big 12 because of their offensive woes last season.

There are even more questions about them there this season – especially after Temple transfer Jeremiah Williams‘ season-ending Achilles injury. Williams was supposed to carry a decent amount of the scoring load as a starting member of the backcourt. TJ Otzelberger’s squad will need another St. Bonaventure transfer, Jaren Holmes, to step up in a huge way. that he hasn’t to this point in his career.

Iowa State’s defense is enough to give the Cyclones a chance to win every single game they play. Its offense, though, gives it a chance to lose every game it plays in. An undefeated non-conference slate is what ultimately gave ISU’s tournament resume the metrics needed to get into the Big Dance. I don’t expect that to be the case again. I also think the Cyclones will be lucky to match last season’s 7-11 mark in conference play. Those offensive struggles are still there, and the rest of the Big 12 projects to be very good.

Given that, it would be shocking to see Iowa State go dancing again in 2023.

The 2023 NBA Draft is not expected to be full of college stars. Each of the projected top three picks – Victor Wembanyama (Metropolitans 92 in France), Scoot Henderson (G League Ignite) and Amen Thompson (Overtime Elite) – are already playing professionally and appear to have a stranglehold on those positions. Several other non-college prospects project to be first-round picks, too.

But from the college ranks, I believe the first player selected will be Baylor’s Keyonte George. He should slide in and be the Bears’ go-to scorer right off the bat and one of the best pure scorers in the country.

The 6-4, 185-pounder can fill it up from all three levels and create for himself off the bounce, but it comes within the flow of the offense. His ability to produce and take over without being a ball-stopper makes him even tougher to defend — and makes his team more successful. George is already one of Baylor’s most indispensable pieces. He scored 22.8 points per game with the Bears at GLOBL Jam, including a 37-point outing against Canada.

Other highly rated freshmen like Arkansas’ Nick Smith and Duke’s Dereck Lively should be in the mix. Nevertheless, George’s scoring ability – and I’m projecting defensive growth, given what we know about Baylor – will give him the edge.