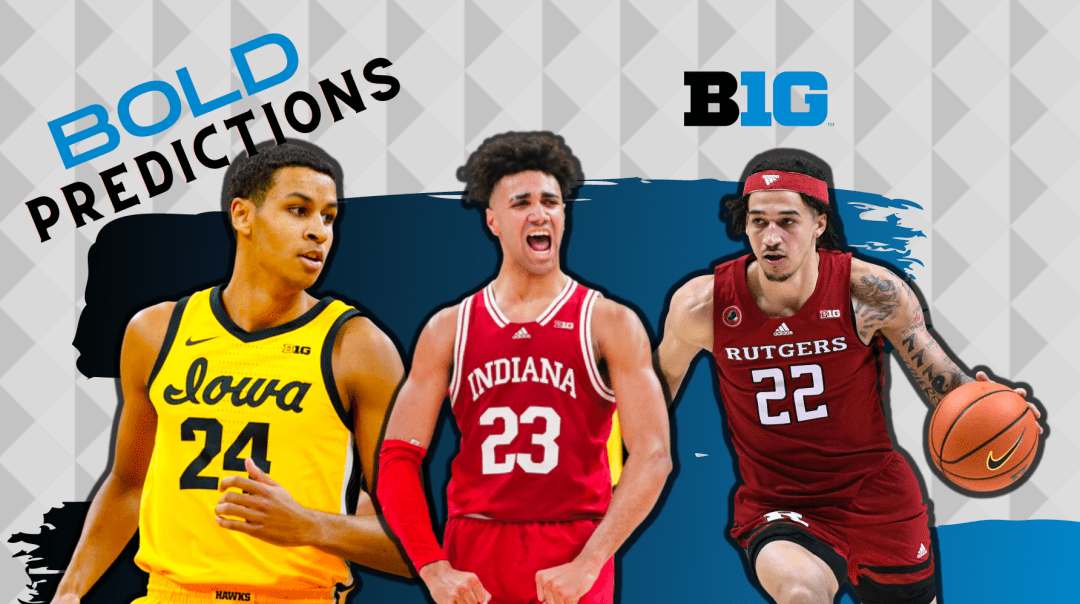 The Big Ten is traditionally one of the nation’s best conferences, but questions abound for many of the league’s top teams.

The Big Ten has been one of the college basketball’s standard-bearers over the last few seasons. Seven teams — fully half the league — spent time ranked in the AP Top 25 during the 2021-22 campaign, and three more received votes during multiple weeks. The widespread success of teams in the league showcased itself on Selection Sunday when nine teams earned NCAA Tournament bids, tying for the second-most bids a conference has seen in a single season.

While the Big Ten will surely get back to that perch sooner rather than later, the 2022-23 season projects to be a down one for the league. Many of its top programs are rebuilding, as evidenced by the fact Indiana is the only Big Ten team ranked in the preseason top 20. Michigan (No. 22) and Illinois (No. 23) are the only other teams in the rankings.

Even if the top of the conference isn’t as strong, its depth may still be there. Seven teams could go dancing, per Lukas Harkins’ preseason bracketology in The Almanac, and that number is the most of any league (tied with the ACC and SEC). The relative parity compared to years past could make for a wild and unpredictable Big Ten basketball season.

So, what are some crazy things that may happen? Let’s start with those Hoosiers.

OK, has the shock worn off yet? Let me clarify: I don’t think Indiana will be bad or miss the NCAA Tournament. They’ll be a solid team, and they’ll go dancing. But I only think they’ll be slightly better than last season, rather than making the big leap many are projecting.

Much of Indiana’s preseason hype lacks substance, as I detailed in a piece earlier this offseason. Trayce Jackson-Davis is a very good player, but to this point in his career, he has not proven himself as a true difference-maker capable of carrying IU to wins against top teams. Indiana’s 3-point shooting woes weren’t addressed, and depth is still an issue.

The Hoosiers are relying on top-30 freshmen Jalen Hood-Schifino and Malik Reneau to be high-impact players immediately, and we don’t know if either are ready for that. I also don’t expect Xavier Johnson to play consistently at the high level he did down the stretch last year.

The way many feel about Indiana is based on how IU closed last season, beating Michigan and Illinois in the Big Ten Tournament before knocking off Wyoming in the First Four. But let us not forget that the Hoosiers needed to win both those games against Michigan and Illinois to even make it to the Big Dance — where they ultimately lost by 29 points to Saint Mary’s in the first round.

Indiana can still take a step forward and only be a fringe Top 25 team. The program hasn’t been ranked since the 2018-19 season. The Hoosiers haven’t finished with a winning record in Big Ten play since 2015-16. This group should snap both those streaks — but they’ll struggle more than expected, which will keep them out of the conference title race.

Yes, losing Ron Harper Jr. and Geo Baker is absolutely going to hurt Rutgers. They are perhaps the program’s two best players in recent memory (I think Harper certainly is No. 1 in that category) and were the lone consistent bright spots for an otherwise dreadful offense last season.

Their departures have many writing off the Scarlet Knights and, while I’m not sure they’re an NCAA Tournament team, I do think they have enough to continue their streak of positive play in the Big Ten.

Triple-double threat Paul Mulcahy is back and will be one of the conference’s best guards. The same goes for Caleb McConnell, one of the nation’s best defenders who, while inconsistent, has shown he can be a threat offensively as well (see his 23-point showing against Notre Dame in the First Four). There’s a chance he becomes a star this season.

Another star in the making is big man Cliff Omoruyi, a paint beast who was top-10 in the Big Ten in block rate, rebound rate, fouls drawn and true shooting percentage last season as a sophomore. If he’s able to maintain that production in a larger role, combined with his athleticism and stretch, he’ll be one of the conference’s best big men. Just ask Zach Edey!

Even if those three don’t progress much offensively, we know Rutgers’ floor will be relatively high because of its defense and its home-court advantage. The Scarlet Knights have ranked in the top 70 nationally in KenPom’s adjusted defensive efficiency metric each season under Steve Pikiell and are 42-8 at home over the last three seasons.

Add those things with the offensive upside of Mulcahy, McConnell and Omouryi — and the wide-open nature of the Big Ten this year — and I think Rutgers manages to put forth another solid season.

3) Big Ten gets its fewest NCAA Tournament bids since 2018

The Big Ten has led the NCAA in bids for each of the last three tournaments, sending eight teams in 2019 and then nine each of the past two seasons. However, they will not lead the country in bids in 2023.

It comes down the lack of teams at the top. As mentioned previously, there are only three teams (Indiana, Michigan, Illinois) ranked in the preseason AP Top 25 — and none are that high. Those are also the only three programs expected to remain close to the rankings on a consistent basis.

Part of the reason why the Big Ten has been so good is because of the sheer number of elite teams it had at the top. The middling teams in the league then had opportunities to pick up notable wins against the league’s upper crust to raise their own tournament resume. In turn, that situation led the conference having more tournament-worthy teams.

Not having as many (or really any) truly elite teams at the top will hurt the Big Ten’s depth. The league’s seventh, eighth, and ninth-place teams will have fewer chances to get the marquee wins necessary to carry their respective resumes. This might be a six- or seven-bid league, but eight or nine feels very unlikely.

I think Iowa will be one of those teams feeling the squeeze of a down year in the Big Ten. Fran McCaffery has done a quality job during his 12 seasons in Iowa City, putting the Hawkeyes in each of the last three NCAA Tournaments. (And it would’ve been 4-for-4 if the 2020 tournament had been played.) Sure, he still hasn’t advanced to the second weekend, but his Hawkeyes finishing top-five in the Big Ten each of the past three seasons means something.

Of course, Iowa had a National Player of the Year (Luka Garza) and a top-five NBA draft pick (Keegan Murray) leading them during this three-year stretch. McCaffery and the staff did a terrific job developing those players, but both were also extremely talented — and both had talented pieces around them.

I don’t think the depth of talent is there for the Hawkeyes. Kris Murray, Keegan Murray’s twin brother, is expected to break out in a larger role. Even if he does, I don’t think there’s enough else on this roster to make them tournament caliber. Patrick and Connor McCaffery are both inefficient scoring options, and Tony Perkins is another below-average shooter in the backcourt. Overall, the roster lacks athleticism and versatility.

This will still be a competitive team given how effective Iowa’s offensive system has become, but the talent and projected production on this roster seems like one destined for the NIT.

Kris Murray is the one getting the buzz as the Big Ten’s biggest breakout player for the 2022-23 season, but I think many are overlooking Wisconsin point guard Chucky Hepburn.

The Badgers need to replace both Johnny Davis and Brad Davison on the perimeter, who combined for nearly 34 points per game — nearly 48 percent of Wisconsin’s total scoring. Hepburn will likely now step into that lead role on the perimeter. The 6-2, 205-pounder played a true point guard role as a freshman and led the Badgers in assists. He also showed the ability to handle more of the scoring load as the season went on.

Hepburn scored in double figures in six of Wisconsin’s final 11 games before the NCAA Tournament, matching his total from the first 21 games, before going down to injury in the first half of the Badgers’ first round game. Hepburn led Wisconsin in 3-point shooting (min. 30 attempts), has good quickness, strength to hold off his defender and the ability make shots off the bounce at a high clip.

He had the full repertoire on display against Purdue on March 1, where his career-high 17 points and game-winning 3 earned the Badgers a share of the Big Ten regular-season title.

The flashes Hepburn showed late in the year indicated he likely could’ve done more in Wisconsin’s offense, but the opportunities weren’t there. Davis was a top-10 NBA Draft pick and Davison was a fifth-year starter, so it was natural that they’d be the first options.

This season, however, the offensive burden is going to fall on Hepburn. He has the ability to produce at a high level, and that will do wonders for him in a league with so few established, high-quality guards.