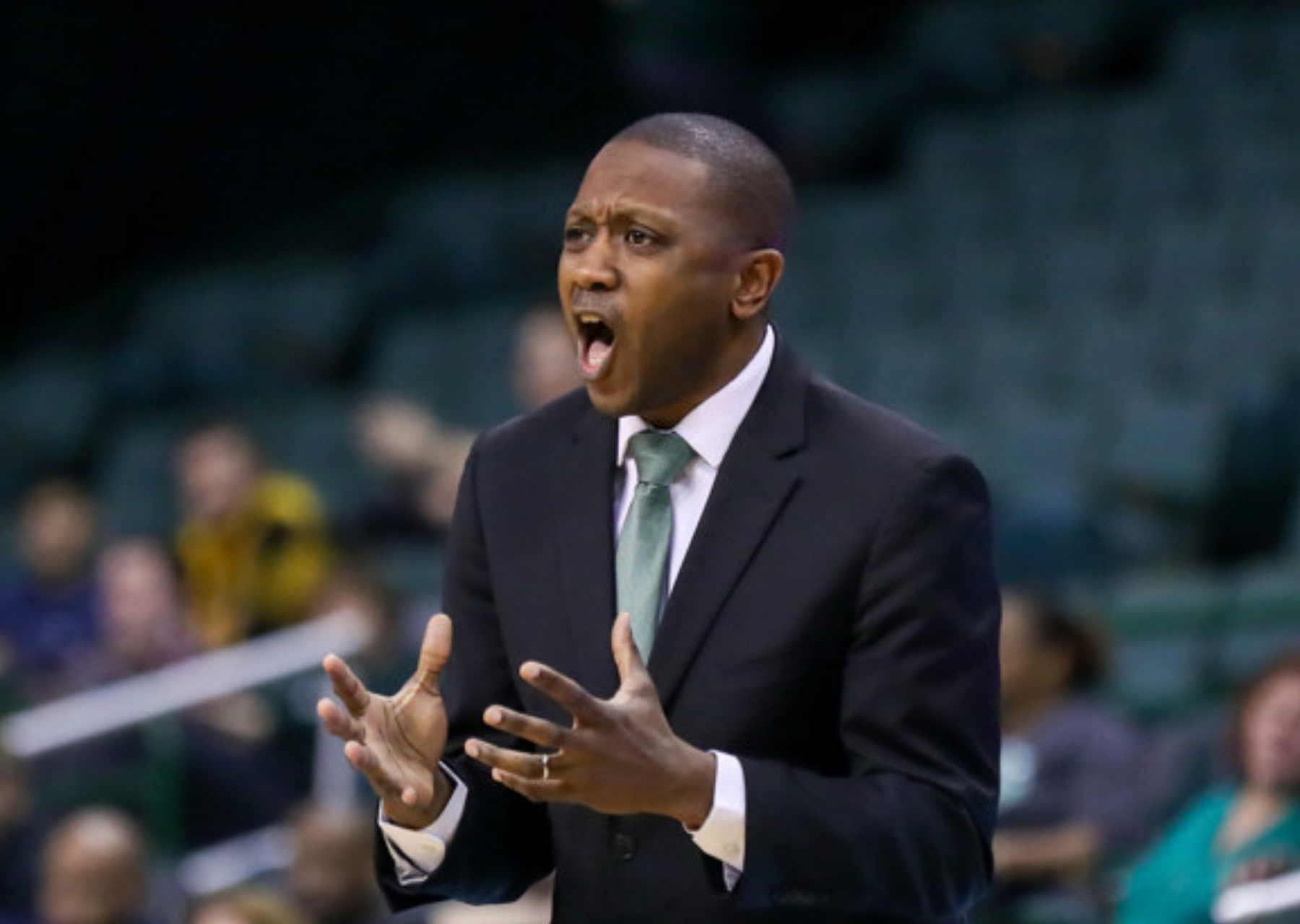 Bracketology class is in session. Six mid-majors have crucial opportunities in the opening week of the college basketball season.

Is the opening week of the college basketball season way too early to start talking about bracketology? Absolutely, but these results will matter when the selection committee meets later in the year.

The entire body of work is considered for NCAA Tournament inclusion and seeding, meaning these opening games are just as pivotal as those taking center stage in February and March.

The importance of nonconference is particularly true for mid-majors with their sights set on competing for at-large bids. Unlike high-major teams that will have an abundance of Quadrant 1 and 2 games to bolster their resumes, the nonconference slate is the time for mid-majors to make their early cases to the committee.

Coming up with an upset or two in the earlier portion of the year can set the tone for a campaign prior to racking up wins in conference play. Making a strong impression might even provide some margin for error.

The 2021-22 season is nearly upon us, and there are six such high-majors that have a pair of huge games in just the first few days. Our first bracketology class of the new season is now in session.

Buffalo is the preseason favorite to win the MAC this season behind the starring triumvirate of Jeenathan Williams, Josh Mballa and Ronaldo Segu. The Bulls are seeking revenge after falling in the MAC Tournament title game a year ago and have their sights set on reaching the NCAA Tournament for the first time under head coach Jim Whitesell.

Their season-opening road matchup with No. 6 Michigan presents a massive opportunity to jumpstart an early resume. The Wolverines bring back some pieces from last season but their high rating is largely due to their impressive group of newcomers. Buffalo boasts far more year-over-year continuity and might be able to pull off a splash upset.

I won’t go as far as to say that this Buffalo team mirrors the Massinburg/Perkins/Harris team, but that group also had an early nonconference opportunity. They were able to put the nation on notice by taking down West Virginia (who went on to have a disappointing season but the sentiment still stands). Might this season’s team be able to pull off the same?

The Bulls’ challenging opening week doesn’t stop there. They also have to go on the road and face North Texas over the weekend. The Mean Green are projected to be a middle-of-the-pack CUSA team and are another KenPom top-150 opponent. Both games will be extremely difficult but could put Buffalo in a great early position if they could pull off major road wins.

Ohio figures to be one of Buffalo’s top competitors for the MAC title this season and could also compete for an at-large bid. Replacing Jason Preston is going to be a challenge, but sophomore Mark Sears is poised to help fill those shoes. The Bobcats also return four double-digit scorers in Dwight Wilson, Ben Vander Plas, Ben Roderick and Lunden McDay. Head coach Jeff Boals should once again deploy an elite offense capable of winning a lot of big games.

The Bobcats’ opening week includes back-to-back stellar mid-major matchups. Belmont (OVC) and Cleveland State (Horizon) are both preseason favorites in their respective leagues and will be seeking resume-builders of their own in the early going. The Bruins are one of the nation’s most efficient offensive teams and will test Ohio’s defense in a big way; the Bobcats ranked just 145th in adjusted defensive efficiency last season.

Starting 2-0 would give Ohio a pair of solid victories, including a big one on the road.

Opening week: at BYU, vs. Ohio

Cleveland State, as already referenced, is the preseason favorite to win the Horizon League. However, the Vikings have an extremely arduous journey ahead to compete for an at-large bid. A Horizon League team has not received a No. 12 seed or better since Butler (!) in the 2011 NCAA Tournament. There are simply too many landmine games in conference play that can plummet resumes. Meanwhile, the margin for error in The Forest City is extremely small.

The Horizon’s unlikely chance at an at-large bid makes this opening week so important for Cleveland State as they have a pair of opportunities for quality wins.

Facing BYU on the road will be a challenge. The Cougars are a fringe preseason Top 25 team in the country with a proven stud leading the way in Alex Barcello. Reigning Horizon League Defensive Player of the Year Tre Gomillion will have his hands full against the senior guard. Additionally, the previously discussed Ohio group features a similarly high-efficient offense that will challenge Cleveland State’s defense — at least the Vikings will be in front of their home crowd for that one.

BYU is a projected NCAA Tournament team coming into this season. However, playing in a mid-major league leaves open the possibility of damaging losses once conference play opens up. With this in mind, it is important for the Cougars to build some margin for error in the nonconference. Head coach Mark Pope’s team faces three formidable opponents to begin its season: Cleveland State and San Diego State on opening week and vs. Oregon (neutral) in Week 2.

Cleveland State and San Diego State are coming off NCAA Tournament appearances as their respective conference’s regular-season and tournament champions. Both bring back their fair share of talent as well and are hoping for return visits this time around. BYU will be tested early against these oppositions, and the supporting cast around star Alex Barcello is hopefully up for the challenge.

Does sophomore Caleb Lohner make the leap into stardom? How do incoming transfer guards Te’Jon Lucas and Seneca Knight fit alongside the returners? Tough early challenges will help determine the answers to those questions that will have season-long implications.

San Diego State is another squad poised to reach the NCAA Tournament this season. A berth would also mean three straight appearances for the Aztecs; head coach Brian Dutcher has done an incredible job during his four-year tenure at the helm of the program. The Aztecs are not quite the preseason Mountain West favorite this year but they are essentially the “1B” to Colorado State’s “1B” at this point. They will still surely compete for an at-large bid and could be a Top 25 team in the country for long stretches.

San Diego State’s opening week consists of a potential trap game against UC Riverside prior to going on the road to face BYU. The Cougars are easily the tougher opponent of the two, and playing them in Provo makes that game all the more difficult. The Aztecs have to avoid looking ahead to that matchup, though, as UC Riverside is capable of being a threat. The Highlanders are expected to compete near the top of the Big West.

This opening week won’t tell us much about San Diego State’s NCAA Tournament at-large resume. However, it could show some indications of whether they might contend for a top-6 seed in the Big Dance as they have the past two seasons.

The Big West has been represented by a No. 13 seed or better in four of the last six NCAA Tournaments. The conference has been on the rise for the past few years and features a few intriguing teams for 2021-22. UC Irvine is not the preseason favorite to win the league but does have the biggest opportunities to build a resume during the opening week of the season. The Anteaters will first face New Mexico State on the road before returning home to take on Boise State.

Both teams are projected KenPom top-110 opponents and do not be surprised if both rise from their preseason rankings as the season progresses. NMSU is (as seemingly always) the favorite to win the WAC this season and boasts a balanced attack. Boise State, on the other hand, enters this season as a second-tier MWC team but can light it up from three. The Broncos’ high-volume 3-point shooting makes them especially dangerous.

UC Irvine would need a lot of things to bounce the right way to be an at-large contender this season. Winning their openers against two fellow top mid-majors would go a long way in kickstarting that type of campaign.