Now that July’s recruiting evaluation period is upon us, coaches are anxious to pick up quality talent to take their respective teams to the next level.

Using 24/7 Sports’ recruiting class points system and Sports-Reference’s Simple Rating System (SRS), I compared each of the seven power conference team’s recruiting ratings and SRS ratings over the previous five seasons. Then, with a linear regression, I projected what each team’s SRS rating should have been since 2013 based on their recruiting results. For the sake of this exercise, ACC, American, Big 12, Big East, Big Ten, Pac-12 and SEC teams were taken into consideration.

The nation’s top 15 teams in terms of five-year recruiting ratings are below. As expected, Kentucky easily leads the entire nation recruiting-wise, and Calipari’s group has performed on the court about as well as projected. The two overachievers among this group are North Carolina and Florida. UNC head coach Roy Williams hasn’t gathered headlining one-and-done players over the past decade, but it has allowed UNC to retain top 100 talent for sophomore, junior and even senior seasons. Last year’s North Carolina team (which recorded its third championship game appearance and second title in nine seasons) had its most common starting lineup led by two seniors, two juniors and one freshman. All five players were formerly top 100 recruits via 24/7 Sports.

The bottom 15 recruiting teams are a mixed bag. Two of the fifteen have reached a Final Four over the past five seasons (Wisconsin and Wichita State), and the other thirteen schools have combined to win one tournament game. This should shed more positive light on what Bo Ryan/Greg Gard and Gregg Marshall have accomplished rather than negativity among the underperforming teams. Creighton, despite having just one tournament victory since 2003, has turned in consistently solid teams as well. 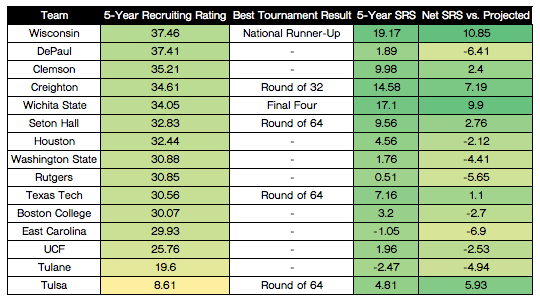 In graphical format, 16 teams are highlighted below. The x-axis indicates how well the team has recruited above/below the power conference average, and the y-axis shows how the team has performed based on their individual projections. For example, teams that recruit well (like Kentucky) are expected to win far more often than a team such as Tulsa or Tulane. 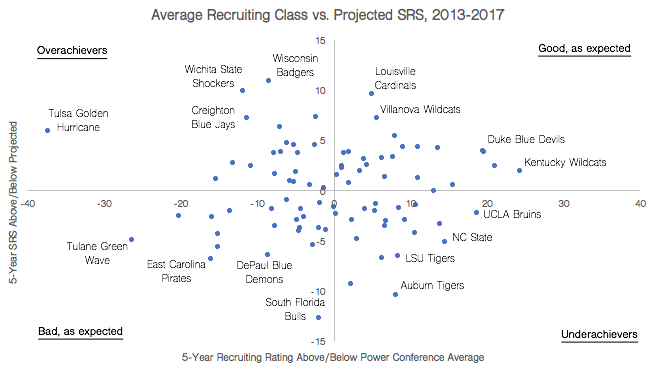 Wichita State, Wisconsin and Louisville have significantly surpassed their SRS projections since the 2013 season. Though Rick Pitino is an above average recruiter, his teams tend to dig deep in March and can even survive in the tournament longer than the Dukes and UCLAs of the college basketball world. Four of the bottom six teams in terms of SRS ratings vs. projected SRS ratings are SEC teams (Auburn, Mississippi State, Missouri and LSU). Pressure’s on, Bruce Pearl.