The 15 most lopsided matchups in college basketball history

Unlike many other sports, college basketball has an incredible amount of diversity among its teams. With 351 active hoops programs that span from Seattle, Washington, all the way to Orono, Maine, varying styles, players, competitiveness and coaching can be found across the country.

With that in mind, college basketball has had its fair share of tremendous beatdowns. Just two seasons removed from Villanova’s 95-51 trouncing of Oklahoma in the Final Four, 17 games have had a margin of victory of 50 points or more since. This past December, the 23rd-ranked Oregon Ducks demolished lowly Savannah State by a score of 128-59, the largest margin of victory since 2014.

In short, though college basketball can be a thrilling and unpredictable game, some matchups have lacked any semblance of competition over the years. Using Sports-Reference’s play index tool, I found the 15 most lopsided matchups in college basketball history. I searched for teams that have played 30 or more games against an opponent, while recording a win percentage greater or equal to 90% with an average margin of victory of 10+ points. Out of 351 teams, just 15 such cases were found. 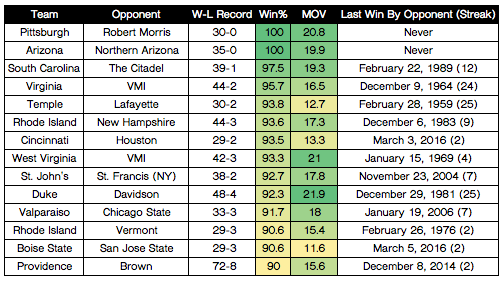 Only two active college basketball D-I programs are undefeated against another team after 30 head-to-head matchups. Pittsburgh and Arizona are a combined 65-0 against Robert Morris and Northern Arizona, respectively. Though Arizona has won more games, Pittsburgh gets the nod with its higher margin of victory. Just one Pitt-Robert Morris game has been decided by single digits, as the Panthers pushed past the Colonials 71-63 back in 1980. These two teams haven’t faced since 2011 after matching up nearly every season since the late 1970’s.

Arizona-Northern Arizona has had much closer results. Eleven of the 35 games have been decided by 10 points or less, including UofA’s second half comeback against the Lumberjacks in December of the 2010-11 season. NAU carried a seven-point lead into intermission, but came up just short in the 63-58 defeat at McKale Center in Tucson.

The only two teams that show up twice in the list of 15 matchups are Rhode Island and VMI. Three of the most lopsided matchups in college basketball history come from Rhode Island teams, with URI toppling New Hampshire (44-3) and Vermont (29-3) and Providence beating Brown in 72 of 80 opportunities.

VMI, however, is on the wrong side of two of these 15 all-time drubbings. The Keydets are a combined 15-134 against Virginia’s top basketball programs (Virginia, Virginia Tech, West Virginia, VCU). VMI hasn’t taken down either Virginia or West Virginia since the 1960’s, and has yet to punch a ticket to the NCAA Tournament’s 64-team field.

Ever since Mike Krzyzewski took over at Duke back in 1981, the Duke-Davidson rivalry has soured. Prior to Coach K’s arrival, Duke led the series 23-3 with an average margin of victory of 17.9. Moreover, exactly half of those matchups were played in Davidson’s backyard. In the 26 matchups under Krzyzewski, Duke is 25-1, has played away from home just once, and has won by an average of 25.8 points. Even Steph Curry, who recorded a cool 29/8/6 slash line against the Blue Devils back in 2009, couldn’t finish the second half comeback against the country’s #2 team.

We will see at least three of these 15 matchups in the 2017-18 college basketball season. Though the American conference schedule is yet to be released, Cincinnati and Houston will take on during league play at some point, with the Bearcats having won 29 of 31 all-time matchups. Arizona will battle Northern Arizona on opening night (November 10) with the undefeated streak on the line, and Boise State and San Jose State will meet once in Mountain West play (January 24) with the Broncos trying to win their 30th against SJSU.