With July’s recruiting evaluation period in full effect, it’s time to get down to the nitty gritty of college basketball recruiting.

Thanks to 24/7 Sports’ extensive recruiting database, I was able to record data from over 200 D-I programs to help understand the geographical history behind each team’s recruiting tendencies. Each team that has signed over 30 recruits (according to 24/7 Sports’ database) since 2000 is included in this article’s data. A total of 203 teams were recorded.

To begin, I combined each of the states into four regions to accommodate for which parts of the country certain teams are recruiting. The regions are according to the U.S. Census Bureau, with players from Washington, D.C. added to the Northeast region.

First up, the West region, which has San Diego State pulling in over 90% of its own recruits from that area. 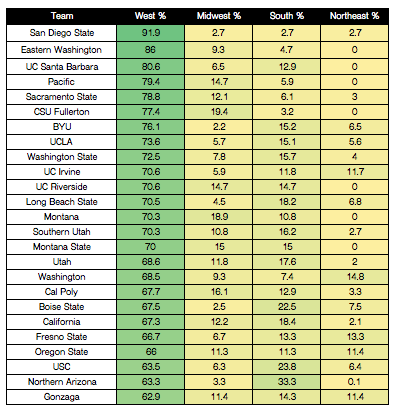 The Midwest region is even more unbalanced. Northern Iowa is the only team that has not landed a recruit outside of its own region. Big Ten notables like Michigan State, Wisconsin, Iowa and Illinois also stay relatively close to home. 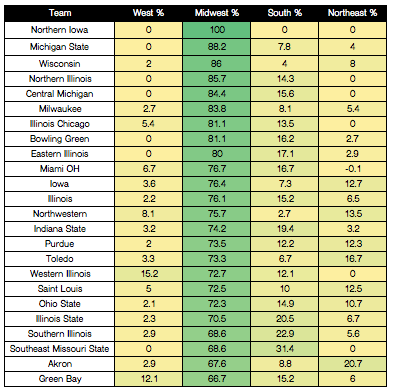 The South region is dominated by SEC, Big 12 and Southland programs. Northwestern State leads the way with 93.5% of its players coming from the south.

In the Northeast region, household teams like Villanova and Syracuse assemble their teams in the upper right part of the country. 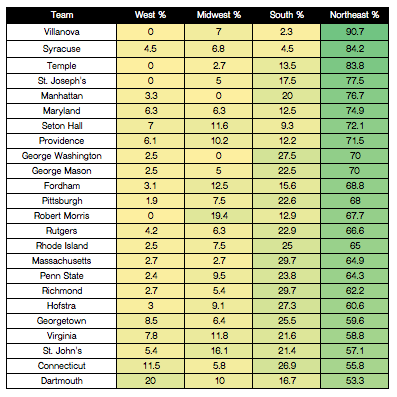 Often in the recruiting world, the term “pipeline” can be uttered from time to time. This means that a coach or program has certain ties to an area in which it recruits players. I found each of the 50 states’ top pipeline school in terms of percentage of the program’s total recruits coming from that state. Texas State and San Diego State are the only two programs that have had more than 70% of their recruits signed from a certain state. 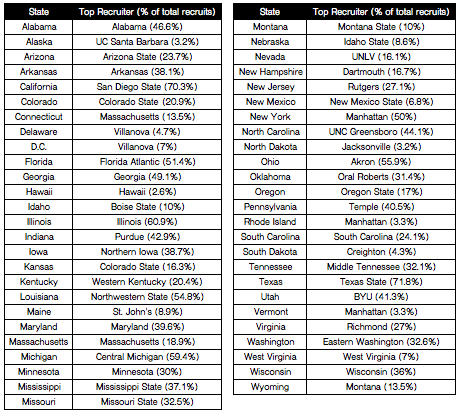 The conference table below displays the average percentage of players that come from the specified state. For example, in the Big Ten, approximately 13.4% of the conference’s rosters over the last 17 years have consisted of players that went to high school in Illinois. A whopping 55.1% of Big West rosters are assembled of California players, far more than the 37% of Texas players on Southland rosters, which is the second-highest total. 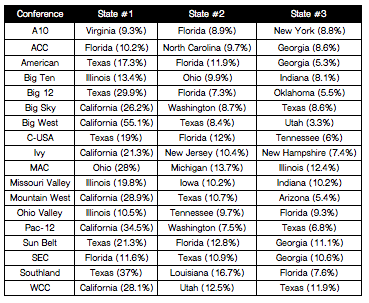 In-state recruits can also be a difference-maker for some programs. Though teams like Kentucky, Duke and North Carolina might be able to travel across the country to find the nation’s top talent, other programs stay in-state to sway players to join their team. The teams that had the most (and least) in-state players dating back to 2000 are listed below. Rhode Island is the only program that has not had a single player from its home state on a roster over the last 17 years. The second fewest, coincidentally, is Providence. 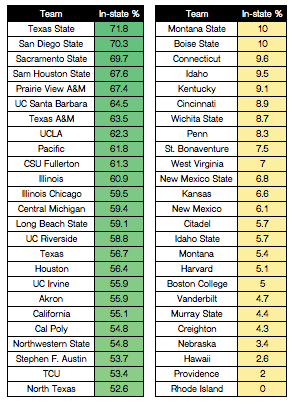 Understanding recruiting and how it impacts teams and conferences is one of the intriguing wonders of college basketball. The stats above should provide some insight into how recruiting is performed across the country. Because of college basketball’s diversity, both on a geographic and economic basis, it is interesting to see how various programs are affected by their current situations.