No championship-winning coach has ever fallen harder than Tubby Smith

Earlier this week, Tubby Smith and the Memphis Tigers were picked 11th and 12th in the American conference standings by Lindy’s and Athlon Sports, respectively, for the 2017-18 season.

Though a surprise to almost no one, the upcoming season is destined to bring a harsh blast of reality to the Tigers fanbase, as well as the continuation to the sour end of Tubby Smith’s once-great career.

Not even ten years removed from John Calipari’s four consecutive 33+ win seasons with the Tigers, this year’s Memphis squad returns just two players in what was the most infamous offseason in program history.

The most explosive story of the spring included twin brothers Dedrick and K.J. Lawson’s decision to transfer out of the program and head to Kansas. The move not only resulted in a net loss of 31.5 points (42.5% of the team’s 2016-17 total) and 18.0 rebounds (47.6%) of nightly production, it also sparked K.J. Lawson to post a viral Snapchat video spouting off on his former head coach (NSFW). Markel Crawford, the second-leading scorer from last year’s team, also announced he would be leaving the school, adding another 12.8 points to the 2018 teardown.

Memphis ended up losing six players to the transfer market this offseason (including sophomore point guard Jonathan Bins spurning the Tigers for Walters State Community College) after having another half-dozen players leave the season before. Memphis has seen a total of six players depart from the program for the likes of non-D1 programs over the past 15 months.

The head-scratching stories out of Memphis have been rather routine since Tubby Smith signed a five-year, $15.45M deal back in April of 2016. But what’s unusual about Smith’s head coaching career is that no national championship-winning head coach has ever fallen from grace quite as hard as Tubby.

Back in 1998, Jeff Sheppard, Nazr Mohammed and Scott Padgett led Tubby Smith and the Kentucky Wildcats to a 29-win regular season and national championship – the seventh in school history. That was Tubby Smith’s first season in Lexington, and he proceeded to capture six more regular season SEC titles and four more conference titles in the following six seasons. Dating back to his days with Georgia and Tulsa, Smith had notched 14 consecutive NCAA Tournament appearances after the 2007 season.

This type of fall is not prototypical for head coaches that had once enjoyed a “One Shining Moment.” I recorded yearly winning percentages of each head coach that has won a national championship since 1987, and then used a five-year rolling average to compare how Smith’s career progression sizes up against other title-winning coaches.

Smith is a notable outlier here. Most head coaches have continued to maintain rolling career win percentages of over 70% well into their respective head coaching careers. Smith has now gone four consecutive seasons without scoring a 20-win campaign, and has just two tournament appearances over the last seven years. It’s hard to envision these numbers ever improving, either.

The table below shows each head coach that has won a championship since 1987 and how they have performed since their first title. 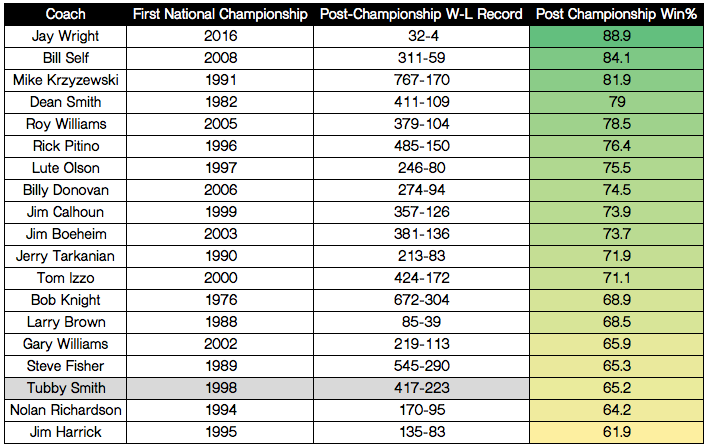 Tubby Smith comes in with the third-worst post-championship winning percentage, only to Arkansas’ Nolan Richardson and UCLA’s Jim Harrick, who spent time with Rhode Island and Georgia before calling it quits.

The numbers on Tubby Smith are quite staggering. For those that weren’t around or following college basketball during Smith’s heyday, it’s hard to envision Smith as much more than a fringe 20-win coach on a seasonal basis. In the past decade, he’s been as average as coaches come.

Maybe, just maybe Tubby has a couple good years left in him, but I sure wouldn’t count on it. Memphis will need much more talent and leadership before the Tigers are anywhere near the tournament conversation.