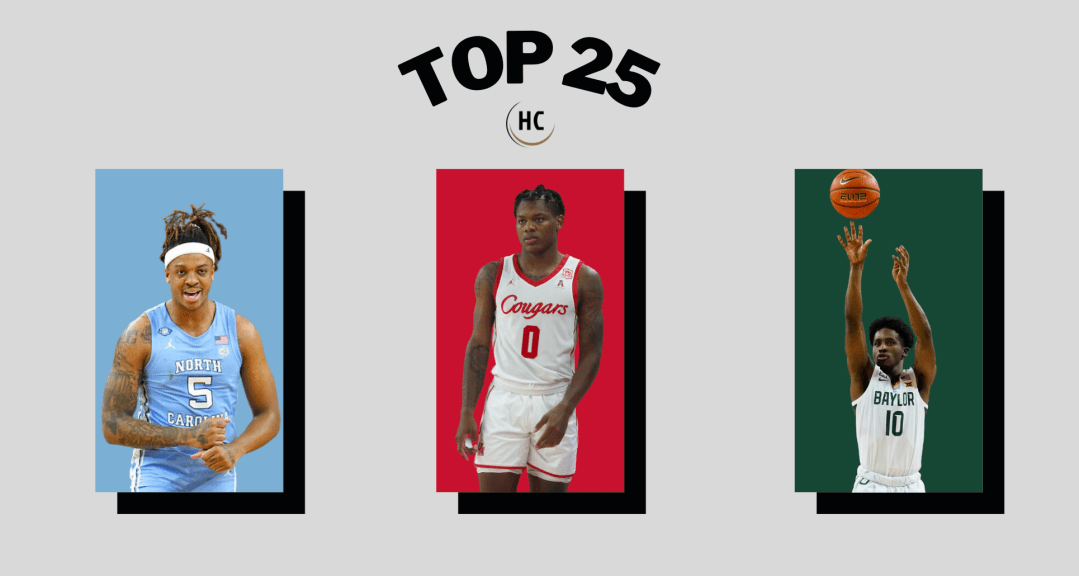 Virginia climbs up to No. 5 in the latest Heat Check CBB Top 25 following signature victories in Las Vegas over Baylor and Illinois.

Feast week is here, which means college basketball action is heating up across the country.

This past weekend provided some high-quality matchups, including the Continental Tire Main Event. Virginia captured signature wins over Baylor and Illinois to cut down the nets, proving that Tony Bennett’s squad is back on the rise.

Which team will be next to break out? Michigan State already has a pair of impressive wins over Kentucky and Villanova while Texas’ beatdown of Gonzaga rocked the country last week.

The Heat Check CBB preseason Top 25 is below.

Texas Tech is off to a 3-0 start, taking care of business in its season-opening homestand. The Red Raiders could vault up the national rankings with a strong showing in the Maui Invitational against a loaded tournament field. Daniel Batcho has been a pleasant surprise so far down low in the absence of the injured Fardaws Aimaq. -Eli Boettger

Tennessee rebounded from its disappointing loss to Colorado with a dominant effort against Florida Gulf Coast. After coming off the bench twice to start the year, Josiah-Jordan James had 18 points and six rebounds in the winning effort. Tennessee still hasn’t shot the ball particularly well to start the season but its defense continues to cause fits on the other end of the floor. -EB

It might be time to Fear the Turtle, as the Terps are off to one of the fastest starts in college hoops. Maryland is 5-0 after beating Saint Louis by 28 and Miami (FL) by 18 in the Hall of Fame Tip-Off, led by two huge games from Donta Scott. In both games, Maryland had five player score in double figures. Kevin Willard is off to a great start in College Park. -Andy Dieckhoff

The Hawkeyes only had one game this past week, but they made the most of it by hanging 83 points on a supposedly staunch Seton Hall defense. Kris Murray is looking every bit the star that he was supposed to be coming into the year, as evidenced by his 29-point, 11-rebound outing against the Pirates. Meanwhile, Filip Rebraca (2.7 blocks per game) has been an eraser. -AD

Randy Bennett’s squad is making an early case as the nation’s best defense. Through five games — four of which came vs. KenPom top-150 opponents — the Gaels have allowed just 0.79 points per possession. Meanwhile, the scoring attack has been a balanced effort thus far, with four Gaels averaging double figures. The schedule ramps up even more with the Wooden Legacy and matchups against New Mexico, Houston, Missouri State and San Diego State. -EB

The Huskies have been on crash course up and down the Eastern States, beating up on a quintet of sub-200 KenPom teams over the first two weeks. The schedule gets considerably tougher this week when UConn travels across the country for the Phil Knight Invitational in Portland. The PKI event will be a great litmus test for Adama Sanogo and the Huskies. -AD

The Tigers have not missed a beat on the interior after losing Walker Kessler to the NBA, as junior Dylan Cardwell has racked up a nation-leading 22.7 block rate over the first four games. Where Auburn needs work, though, is from beyond the arc. This was never going to be a team known for its deep threats, but their team 3-point percentage (.250) could become a liability. -AD

Somebody had to go 0-2 in the Continental Tire Main Event, and you can’t spell ‘unlucky team’ without UCLA. The Bruins had a 93.9 percent win probability, per KenPom, early in the second half, but a 15-1 run by Illinois precipitated a comeback win for the Illini. Then, UCLA had to take on an extremely good Baylor team coming off its own surprise loss to Virginia. Tough draw. -AD

After a pair of blowout wins to start the season, Indiana answered in its first major spot with a signature road win at Xavier on Friday. Trayce Jackson-Davis and Xavier Johnson were magnificent, combining for 53 of IU’s 81 points on just 24 field-goal attempts. The breakout star is freshman forward Malik Reneau, who has tallied at least nine points in every game while shooting 19-of-30 from the field. -EB

Sparty has been one of college basketball’s pleasant early surprises. Following a last-second loss to Gonzaga in the Carrier Classic, Michigan State earned a double-overtime win over Kentucky in the Champions Classic and then followed it up by hanging on to a victory against Villanova in which the Spartans led by 16 with eight minutes to go. This group is far from perfect, but the ceiling is much higher than anticipated heading into the season. Plenty more quality-win opportunities await in this daunting nonconference slate. -EB

The Illini nearly pulled off a fantastic second week, but after trouncing Monmouth by 38 and then defeating UCLA in the first round of the Continental Tire Main Event, Illinois came up short in a great championship game with Virginia. Dain Dainja (6-9, 270) has been a massive addition to the lineup. The Baylor transfer currently ranks 40th in defensive rebound rate, 49th in block rate and 102nd in offensive rebound rate, per KenPom, in 19 minutes per game off the bench. -AD

The Aztecs blitzed Stanford early en route to a 12-point win in their only game this week. SDSU got solid contributions from all nine players in its rotation. Everyone played at least 12 minutes, everybody scored, and everybody had multiple rebounds and/or blocks. Presumptive go-to scorers Matt Bradley and Darrion Trammell combined to shoot 3-for-15 for a total of 13 points — and it didn’t matter at all. Guys like Jaedon LeDee and Lamont Butler were there to step up. -AD

The Wildcats dropped their second contest of the year Sunday, trailing Gonzaga by as many as 19 in the defeat in Spokane. In the losses to Michigan State and Gonzaga, Kentucky shot 13-of-50 from 3-point range. Finding consistent production out of the wings to take some pressure off of Oscar Tshiebwe — the only Wildcat with a usage rate above 24 percent — will be vital in how the Kentucky offense flows against top-tier defenses. -EB

While not high-major opponents, the first four teams on Alabama’s schedule won an average of 22.5 games in 2021-22. Nevertheless, the Tide have swept through Longwood, Liberty, South Alabama and Jacksonville State on the way to a 4-0 start. Five-star freshman Brandon Miller has been electric in the early going, while fellow freshman Noah Clowney and sophomore 7-footer Charles Bediako lead the nation’s best offensive rebounding unit to date. -AD

The Bluejays are playing like a coach’s dream right now, limiting mistakes on both ends of the court. Through Nov. 20, Creighton ranked first in defensive free throw rate, second in defensive rebound rate and fourth in offensive turnover rate. By keeping the ball in their hands on offense and limiting both second-chance opportunities and trips to the line on defense, Creighton has won its first four games by an average score of 85.5-59.3, all against sub-200 opponents. -AD

It may be the middle of autumn, but things are scorching in the Arizona desert right now. The Wildcats have the top 2-point percentage in the country (.728) and the third-best 3-point mark (46.7) after three games against sub-200 KenPom opponents. Leading the charge, Azuolas Tubelis is 23-for-30 (.767) on the interior, while Kerr Kriisa is 11-for-16 (.688) from deep. Now, the ‘Cats head to the Maui Invitational to see if they can keep their hot streak going. -AD

The Hogs gave themselves some decent early tests in the first two weeks of the season, including its most recent game against a top-150 mid-major foe in South Dakota State. Regardless, Arkansas has held each of its first three opponents under 60 points. Wichita State transfer Ricky Council has been outstanding, leading the team in minutes per game (34.7), and assist rate (21.2) while also shooting 83.3 percent on 18 attempts going to the rim. -AD

Despite a close loss to Kansas, it’s too soon to judge Duke accurately, as Dereck Lively II and Dariq Whitehead continue to ease their way into the season alongside fellow five-star freshmen Kyle Filipowski and Mark Mitchell. Filipowski has been a stud on both ends, leading the team in scoring and putting up a top-15 defensive rebound rate (33.3) to go with a top-100 block rate (7.6). Meanwhile, Mitchell has a 125.0 offensive rating on .548/.500/.875 shooting splits. -AD

Gonzaga has played four very different games in four very different locations to start the year. The Bulldogs crushed North Florida by 41 in the Kennel before outlasting Michigan State by a single point on an aircraft carrier in San Diego. This past week, the Zags got punched in the mouth in a 19-point road loss in Austin, Texas, before returning home to Spokane — but notably, not to the McCarthey Athletic Center — to land their own 16-point haymaker on Kentucky. -AD

Texas thoroughly dominated Gonzaga in front of a raucous Moody Center crowd on Wednesday, leading the ‘Zags by as many as 23 points. The Longhorns shook off spotty shooting performances in their first two games with 13 made 3-pointers against Gonzaga and a whopping 93 points on just 74 possessions. Iowa State transfer Tyrese Hunter has been the go-to guy so far and leads the team in scoring. -EB

One of the nation’s early surprises has been Virginia, which defeated Baylor and Illinois this past weekend to capture the Continental Tire Main Event trophy in Las Vegas. After a down year on the offensive end last season, Virginia looks the part so far through four games. The Cavaliers are 2nd in 3-point percentage, 3rd nationally in free-throw rate, 4th in adjusted offensive efficiency and 5th in assist rate. That’s an impressive start with two of the games coming against ranked opponents. -EB

Baylor’s backcourt showed up in a big way in Sunday’s pivotal win over UCLA. LJ Cryer and Adam Flagler combined for 50 of Baylor’s 80 points and were 8-of-16 from deep, including some clutch shots late. While the Bears will hope to get more out of their frontcourt as the season progresses, the early returns indicate that Baylor’s guards are as good as any team in college basketball. -EB

The defending champions are starting to earn some respect after pushing past Duke in the Champions Classic to help ring in the official start to the new college basketball season. The Jayhawks immediately followed up that five-point win with a head-scratcher as Southern Utah hung with them for all 40 minutes in an 82-76 nailbiter. Jalen Wilson is averaging 24.5 points, 9.3 rebounds and 4.3 assists as he tosses he hat into the Nationa Player of the Year ring. -AD

UNC looked underwhelming in its first 120 minutes of the season but turned things up a notch on Sunday with a dominant win against an upstart James Madison bunch. The Tar Heels led the whole way and Armando Bacot looked like his usual dominant self with 19 points and a career-high 23 rebounds. RJ Davis led the team in both points (21) and assists (5) as well. Next up is the Phil Knight Invitational before a road trip to Indiana. -EB

Houston secured its first signature victory of the year with a 10-point road win at Oregon on Sunday. The Cougars have looked dominant on both ends, scoring at least 80 points in four of the five games while never allowing more than 56 points. Kelvin Sampson’s squad will remain in the state of Texas for the next few weeks until a massive road contest at Virginia on Dec. 17. -EB