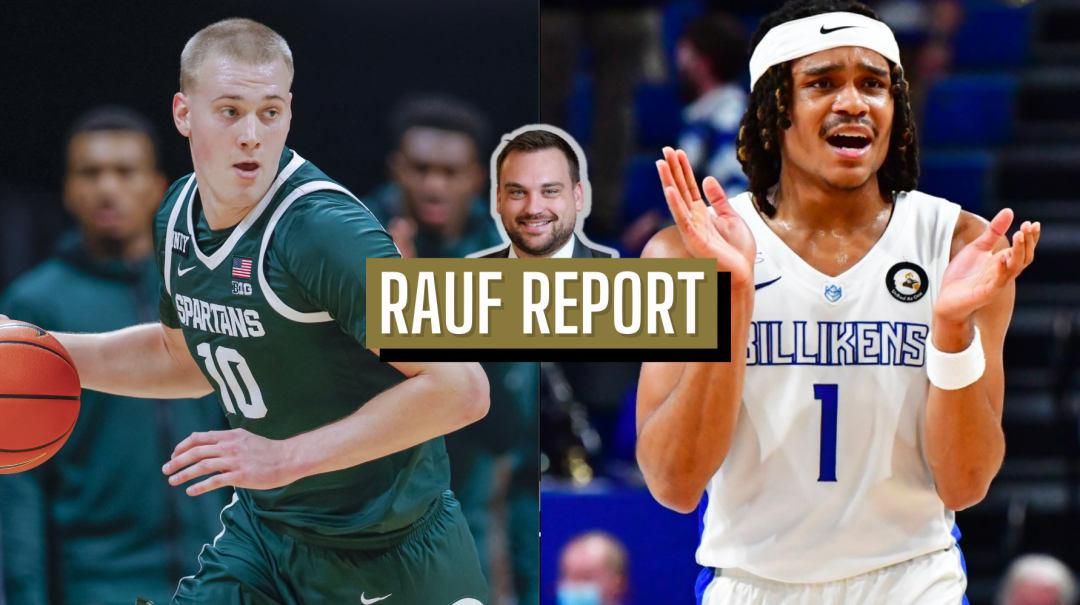 The college basketball season officially tipped off last week. It really felt like the season got going this week, though. A few things remained the same — like Louisville suffering one-point defeats to mid-major competition (shoutout App State) — but we had the marquee matchups that last week lacked.

It started with the Champions Classic, where Michigan State ousted Kentucky in a double-overtime thriller before Kansas upended Duke, handing Jon Scheyer his first career loss in charge of the Blue Devils. A top-15 matchup between Texas and Gonzaga carried the load the following night, which resulted in the Longhorns making the biggest statement of the week.

Texas built a double-digit lead late in the first half before blowing the game open, holding a 20-point advantage within the first few minutes after halftime. The performance indicated that the Longhorns might finally be ready to deliver on lofty expectations that have surrounded the program since Chris Beard took over as head coach.

Of course, there are two sides to every coin, and part of Texas’ success was enhanced by something that is becoming a glaring problem for Gonzaga. It’s where we start this Rauf Report:

— The eight college basketball teams that can win a national championship

Gonzaga’s perimeter defense is an issue

Guard play largely propelled Gonzaga’s run over the last two years in which the program has been ranked No. 1 nationally more often than not. Big man Drew Timme is the obvious headliner and face of the program, yet the ‘Zags posted historically efficient numbers on both ends because of their perimeter success.

Jalen Suggs, Corey Kispert and Andrew Nembhard are all playing significant roles on their respective NBA teams. Joel Ayayi is playing well in the G League with the Lakeland Magic and has bounced back and forth between the G League and NBA throughout his short career.

The current ‘Zags backcourt is talented. Nolan Hickman and Hunter Sallis were both top-35 prospects, according to 247Sports. Julian Strawther likely would’ve been selected in the second round had he left for the NBA Draft, while Malachi Smith was the SoCon Player of the Year a season ago. Then there’s Rasir Bolton, who has started for Mark Few‘s squad each of the last two years.

Talent isn’t the issue, and we see that in stretches on the offensive end.

Defensively, though, this group has struggled.

Texas was a notoriously bad 3-point shooting team a season ago. Zero starters shot over 33.8 percent from deep, and it ranked outside the top 200 nationally in that category. Tyrese Hunter was thought to only make things worse as he was a 27.4 percent shooter at Iowa State.

Through two games, it looked like a bugaboo for the Longhorns. They shot 7-of-36 (19.4 percent) from long range against UTEP and Houston Christian only to explode for a 39.4-percent night against the ‘Zags that included 13 made triples. Almost all of them were open, standstill attempts generated by Gonzaga’s poor defensive rotations or lackluster ball pressure.

“I don’t think I got one of them off the dribble,” Hunter said postgame of his five made 3-point attempts. He was highlighting his teammates in the quote, but it’s also an indictment of how sloppy Gonzaga was on the perimeter. Hunter’s 26 points were a career-high after averaging 11.0 points per game as a freshman with the Cyclones.

This would be easy to write off as “one of those nights” where the other team got hot, but only if the Bulldogs hadn’t struggled in this area against Michigan State in the Armed Forces Classic.

The Spartans didn’t light it up from three — they were outside on a boat, after all — but Michigan State able to get into the lane whenever it wanted. Tom Izzo‘s squad built its early lead in the paint with 26 of its 38 first-half points coming from inside. That’s an alarmingly high percentage.

This all comes with the normal caveat — it’s still very early in the season and a majority of those players mentioned previously are young and stepping into larger roles. Growing pains can be expected, and this can be fixed.

But with Kentucky on deck Sunday, followed by the PK85, and then a matchup with Baylor, things could quickly go downhill if the ‘Zags don’t improve in this area sooner rather than later.

While we’re on the topic of Michigan State, it’s to re-evaluate this team.

I’ll be honest: I did not think the Spartans were going to be good this year. I would’ve bet on Michigan State finishing seventh or worse in the Big Ten for the third consecutive year rather than competing for a conference championship. However, Sparty looks like one of the favorites, if not the favorite, in the Big Ten race.

Michigan State has already played Gonzaga to the wire and knocked off Kentucky, two of the toughest teams it will face all season. Tyson Walker and A.J. Hoggard have been incredibly solid and reliable while Joey Hauser and Malik Hall have each taken a step.

Yet it’s the play of center Mady Sissoko that has made the biggest difference. The Spartans entered the year with major questions inside and the junior has made the proverbial leap. In two games against All-Americans (Timme and Oscar Tshiebwe), Sissoko is averaging 15.0 points and 8.5 rebounds on 60 percent shooting.

Sissoko evolving into an elite lob threat and rebounding force will give the Spartans an edge they’ve lacked.

At the same time, Michigan State still lacks the top-end talent comparable to other elite teams. There is no obvious NBA talent on the roster and the lack of versatility hurt the Spartans down the stretch against Gonzaga.

So, what are we to expect from this group moving forward?

This is not a team that is suddenly a national championship contender or a Final Four favorite, primarily because of the lacking high-end talent. But this is an experienced, veteran group that’s well-coached and consistent. Being able to maintain a high level of play is enough to be one of the best teams in the Big Ten and make the NCAA Tournament’s second weekend.

Arizona State is another team that has really surprised this week, which it capped with a dominant 25-point victory over Michigan to win the Legends Classic. Four different Sun Devils scored at least 13 points as they shot over 60 percent from the field and nearly 58 percent from three.

It was an awesome offensive display from Bobby Hurley’s squad. That said, it’s important to take that result with a grain of salt.

The Sun Devils aren’t even a week removed from losing to Texas Southern. They beat Tarleton State by three in their opener and needed a double-digit, second-half comeback to beat a shorthanded VCU team in their first Legends Classic game. Even with that explosion against the Wolverines, Arizona State still ranks outside the top 100 nationally in offensive efficiency and are 180th in effective field-goal percentage, per KenPom.

This was simply an example of a team getting red-hot at the right time — just look at some of the shots DJ Horne was making just a day after going 3-of-15 from the field against VCU.

Arizona State should win its next two games against Grambling and Alcorn State. After that, though, comes a four-game stretch against Colorado, Stanford, SMU and Creighton. How will this group respond?

Colorado State will remain near the top of the mountain west

Once Isaiah Stevens suffered a foot injury in practice in October, many wrote off Colorado State as Mountain West contender or competing for an NCAA Tournament bid.

Four games into the season, the Rams are undefeated and have an 85-53 victory over South Carolina on its resume. Its most recent performance showcases Colorado State’s long-term potential. It doesn’t have the upside of last year’s team with David Roddy but it’s incredibly disciplined, plays sound defense, and has a high-IQ offense with screens and cutting designed to take advantage of defensive lapses.

Colorado State’s offense sits in the top 10 nationally in effective field-goal percentage, per KenPom, and the Rams are recording assists on nearly two-thirds of all made field goals.

Even without one of the best guards in the nation, the Rams have been remarkably efficient. Once Stevens returns — which CSU hopes will be for the start of conference play — this team will be at another level.

San Diego State still looks like the class of the Mountain West, but Colorado State might be the favorite to finish second, especially considering how Wyoming has struggled early. The decline that many feared isn’t happening.

Guard play is generally down across the country this season, but Yuri Collins is already cementing himself as one of the best in the country. The Saint Louis junior led the nation in assists last season but has taken his playmaking to an entirely different level through three games.

Collins has 36 assists through the Billikens’ first three games with an eye-popping assist rate of 50.0 — meaning he’s recording an assist on half of SLU’s made shots when he’s on the floor. His playmaking was on full display in their 90-84 win over Memphis this week, but he also showed off his scoring chops.

The 6-foot, 190-pounder scored 22 points to go along with nine assists against the Tigers, who traditionally have an elite defense under Penny Hardaway. That didn’t stop Collins from getting into the paint whenever he wanted, where he excels at reading defenses and hitting cutting teammates for baskets.

That performance firmly illustrates what makes Collins so tough to stop. He excels at keeping his dribble alive — even when he gets deep in the paint — which puts plenty of pressure on defenses.

It gives more time for opponents to find openings, and Collins has the vision to distribute. If no one is open, or if he is given space, he can create space for a shot or continue his path to the rim. All four of his made shots against Memphis came off the bounce and he shot 14 free throws, too.

The season is still early but Collins appears to have taken his game to another level. He has upped his scoring average to a career-high 14.0 points per game while remaining the nation’s best playmaker and has Saint Louis as a potential Top 25 team. If this holds throughout the season, Collins could very well find himself on an All-American team at season’s end.