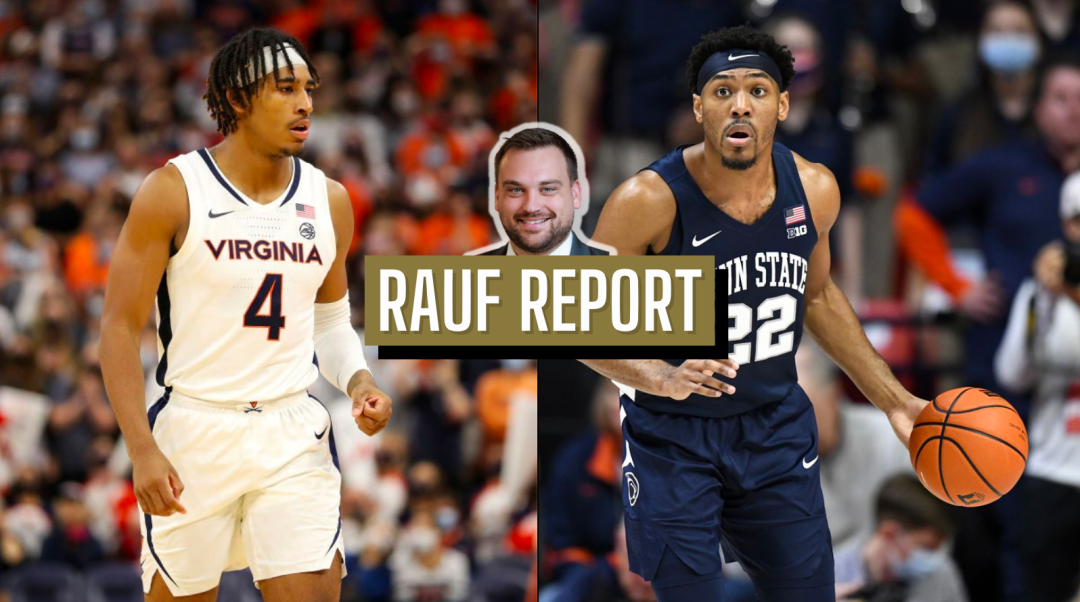 The Rauf Report highlights the biggest college basketball takeaways of the weekend, headlined by Kentucky, Virginia and more.

College basketball’s Feast Week got started this weekend with a handful of multi-team events, which produced a plethora of intriguing matchups for college basketball fans. The most prestigious tournaments — like the Maui Invitational and Battle 4 Atlantis — are set to tip off in the coming days, but we got a lot of fun basketball over the past couple days.

Every game at the Continental Tire Main Event in Las Vegas was awesome. Meanwhile, I was in attendance at the Charleston Classic, where there were also a lot of really good games.

Yet the most anticipated game of the weekend wasn’t part of an MTE. It was Kentucky’s trip to Spokane for a top-5 matchup with Gonzaga, one the Bulldogs won with ease. We discussed Gonzaga’s biggest issue in Friday’s Rauf Report, but it was a non-factor because of the Wildcats’ own issues. That’s where we start today’s column.

All offseason, I wrote and talked about why Cason Wallace — not reigning National Player of the Year Oscar Tshiebwe — was Kentucky’s most important player.

We know Tshiebwe is going to be productive inside and that Sahvir Wheeler is going to post good assist numbers. But when Kentucky struggled last season, particularly down the stretch, it was because it didn’t have enough scoring punch on the wing. There wasn’t a player John Calipari could consistently rely on to go get his own shot or create offense.

All the best teams in the country need to have that guy and Kentucky is no different — even with the abundance of talent annually on its roster. Think of players like Tyrese Maxey, Immanuel Quickley, Keldon Johnson, Tyler Herro, Malik Monk and countless others. The Wildcats had no one like that during their disastrous 9-16 year, and it is largely to blame for them losing four of their final nine games last season.

This season’s Kentucky team has only been tested twice (against Michigan State and Gonzaga), both of which came this past week. And the Wildcats’ wings largely failed both tests.

Against the Spartans, UK shot just 28 percent on 3-pointers as Wallace, Chris Livingston, CJ Fredrick and Antonio Reeves, all of whom are playing their first season for the Wildcats, combined for just 25 total points. Against Gonzaga, they combined for just 27 as Kentucky again struggled from deep (24 percent).

Wallace has shown flashes of two-way brilliance, scoring 14 points in each of those two contests and racking up 12 total steals, but he hasn’t shown that takeover ability. Fredrick and Reeves haven’t provided the shooting they were brought in for. And Livingston only played eight minutes against the Zags, falling to the back of Calipari’s rotation.

Tshiebwe, Wheeler and Jacob Toppin are good enough for Kentucky to repeat last season’s success. This group will contend for an SEC title and be in line for a high NCAA Tournament seed again. But the Wildcats are also in line to relive last season’s failures if things don’t improve on the wings.

OK, so dangerous might be a relative term, but Virginia’s offense is playing as well as it has since the Cavaliers won the national championship in 2019. It is also the biggest reason why the Cavs beat both Baylor and Illinois in Vegas this weekend.

The Wahoos have scored at least 70 points in each game of their 4-0 start, a mark they only hit nine times all last season. They’ve also scored 86 or more points in two of those games, more than they scored at any point during the 2021-22 campaign. In fact, they only scored more than 80 points once, which came in an 82-49 victory over Fairleigh Dickinson.

Armaan Franklin (16.0 ppg) and Reece Beekman (11.0 ppg) have stepped up to give Virginia legitimate scoring options on the perimeter. Just about everyone has stepped up, though. The top six players in Tony Bennett’s rotation are all averaging at least 7.8 points per game. Virginia’s 3-point shooting has provided the biggest boost — the Cavaliers are shooting 46.9 percent from long range, good for second in the country right now.

Here’s a look at how their numbers stack up to past seasons:

Virginia hasn’t changed its identity. It’s still playing at the slowest pace in the country and has an elite defense (only Baylor has scored more than 61 points against it). The Cavaliers are simply playing with the ruthless efficiency that encapsulated their best teams under Bennett. That has put them back among the nation’s elite teams.

Maryland isn’t quite in that same tier as Virginia, but it has shown the bottom isn’t going to fall out like many expected in new head coach Kevin Willard’s first season.

The Terrapins were picked to finish 10th in the league’s preseason poll, and many thought even that was optimistic. After all, four of their top six rotation players were gone from a team that finished below .500 overall last season. This was considered to be a rebuild in College Park.

Well, Willard has built everything back up rather quickly. The Terps were tested for the first time this weekend at the Hall of Fame Tip-Off Tournament and responded with a very loud statement. Maryland beat Saint Louis, a borderline Top 25 team, 95-67 in its first matchup before handling Miami (FL) 88-70 in the championship.

Neither game was really as close as the final score indicated, either, largely because of the way the Terps have been playing on the defensive end. Willard’s defense relies on a few core principles, namely limiting 3-point attempts and forcing opponents to use up as much of the shot clock as possible. His squads force opponents to execute half-court offense, where teams are rarely as efficient as they are in transition.

So far, it’s working. Maryland is 11th nationally in 3-point defense and is forcing opponents to play at a bottom-35 pace when they have the ball. The hot start on that end of the floor hasn’t surprised Willard.

“I mean, I think we’re ahead [of expectations] defensively, but I think as I’ve been getting to know these guys and getting get to know their personality, they’re smart basketball players,” said Willard after the win over Miami. “That has really helped with what we’re trying to do on the defensive end.”

Those performances now have Maryland ranked in the top 25 in KenPom and Torvik, as well as the most recent Heat Check CBB Top 25. This is now a team that should expect to make the NCAA Tournament and compete near the top of the Big Ten, both of which would be considered huge successes in Willard’s first season.

We’ll stay in the Big Ten, a conference known for its big men. Hunter Dickinson, Trayce Jackson-Davis and Zach Edey (just to name a few) are the league’s most notable stars. There isn’t as much firepower in the backcourt, but Jalen Pickett is playing like a star.

The 6-4, 209-pounder has led Penn State to a surprising 5-1 record through two weeks, with three of those wins coming against KenPom top-90 teams. He controls the game with IQ, pace, strength and all-around ability. Pickett doesn’t do anything to wow you, but he has obviously been the best player on the court in each game the Nittany Lions have played this season.

That was never more obvious than when he posted a triple-double in Penn State’s win over Butler in the Gavitt Games, even though he shot just 6-for-18 from the field.

“After the game, I’m like, ‘Man, Pickett didn’t play very well,’ and I look at the box score, and I’m like, ‘Man, he had a triple-double,’” head coach Micah Shrewsberry told reporters after that win over Butler. “That’s the expectation that I had for him. The one thing that he does is he settled us. When things are going, when they’re on the run, when you just need a tough bucket — to be able to throw him the ball in the post and him just go score for you, that’s what really good teams have.”

Other programs in the Big Ten don’t have that guy who consistently makes stellar passes in transition and hits contested threes off the bounce. Heck, not many programs in the country have that, and that’s why the Nittany Lions are hopeful they can make their first NCAA Tournament appearance since 2011.

College of Charleston is dangerous mid-major

Penn State took third place in the Charleston Classic. The team that won? That would be the host of the tournament — the College of Charleston.

The Cougars have put together a really solid resume just two weeks into Pat Kelsey’s second season as head coach. They beat good squads in Davidson, Colorado State and Virginia Tech over the weekend. If you throw in their victory over Richmond last Monday, that gives them three KenPom top-90 wins.

Their only loss came at North Carolina, in a game where the Cougars led by seven at halftime and were within a couple of possessions late.

The sheer number of quality guards Charleston has on its roster is an obvious strength, and one that has given opponents a lot of trouble. That wide-open style of play with multiple ball-handlers helped Kelsey flourish at Winthrop, and it now has CofC experiencing more success than the Cougars have had in recent memory.

A lack of size is a major issue, particularly on the defensive end, but Charleston is a team no one wants to face right now. The Cougars should engage fellow mid-major darling Towson in an extremely entertaining race in the CAA.