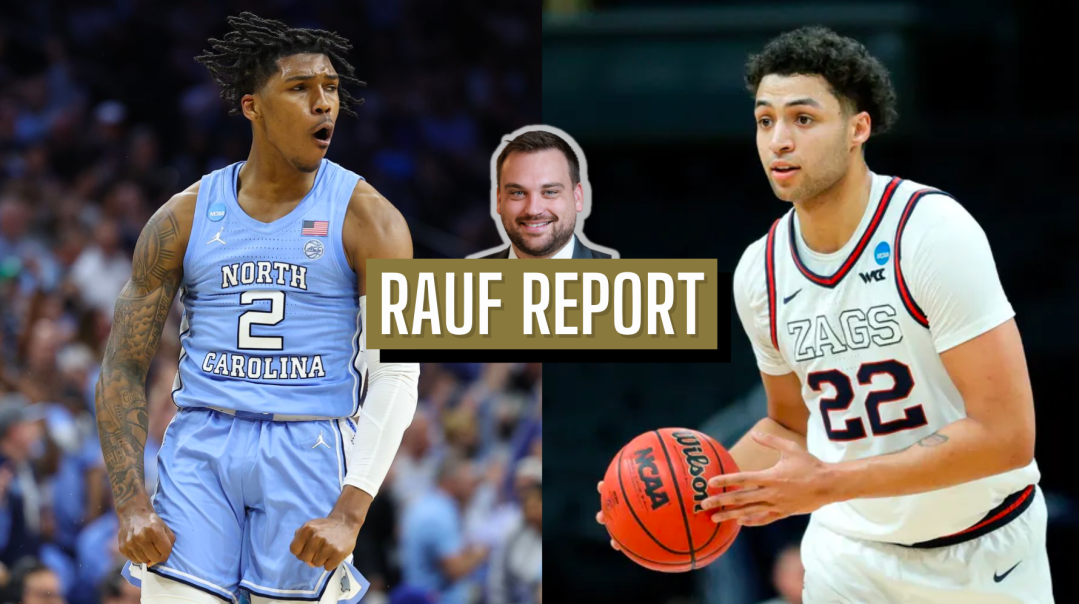 Feast Week raised red flags all over college basketball. The latest Rauf Report looks at the most pressing concerns for five of last week’s biggest losers.

Thanksgiving is a wonderful holiday, yet the long weekend is rarely as rosy as we anticipate.

No, it’s almost always filled with ups and downs.

One moment, you’re with extended family and celebrating a wedding (shouts to Monica and Will) and the next, well, you’re dealing with a sick, screaming toddler who hasn’t slept more than a few hours each night during the trip, causing you to sleep even less (having small children is fun, they said).

For some college basketball teams, the holiday was the restful, uplifting trip they needed. For others, the Turkey Day travels left them sick, screaming and likely losing sleep on the flight back home.

Indeed, the best teams across the country had polarizing experiences during Feast Week – though with hopefully more sleep than I got – creating a massive reshuffling at the top of the sport. Purdue and UConn balled out and won their respective PK85 brackets, and those collective performances moved each team into the top eight spots of the latest AP poll. Meanwhile, Arizona’s impressive performance at the Maui Invitation earned it a top-five spot.

Teams have to fall for all those teams to rise, of course, and a number currently find themselves in a freefall.

Five different teams either rose or dropped at least seven spots in this week’s AP poll, numbers reflective of the volatile and unpredictable start of the college basketball season. For the five that stumbled (Gonzaga, Duke, North Carolina, Michigan State, San Diego State), the good news is that it’s still early. There’s plenty of time to fix what plagues them.

So, what exactly are those problems, and how can each team correct it? This week’s Rauf Report dives into that, starting with a North Carolina team that had the largest one-week drop from No. 1 in the AP poll’s history.

The Tar Heels have not looked good through the season’s first three weeks. UNC Wilmington and James Madison are the only teams it has beaten rather comfortably, and even those games got hairy at certain points in the second half. Charleston, Gardner Webb and Portland were all within striking distance late in the second half. Late leads were blown against Iowa State and Alabama in the team’s two losses.

There are numerous reasons for these struggles. Defensively, UNC has been bad, particularly with help side rotations and closeouts. Caleb Love has been the biggest culprit of seemingly mailing it in on that end of the court.

UNC also isn’t shooting the ball well (30.8 percent on 3-pointers, compared to 35.8 percent last season), and Armando Bacot’s numbers are down from both usage and efficiency standpoints.

But the biggest reason for UNC’s struggles? The offensive sets it’s running — or, rather, not running.

During North Carolina’s second-half surge, Hubert Davis employed an offense that was predicated on the pick-and-roll with off-ball screens and designed spot-ups off it. There was movement, and every movement had a purpose. While it was built around guards making decisions, Love and RJ Davis didn’t have to do everything.

Those sets have been few and far between seven games into the 2022-23 campaign, though. They have been largely pushed out in favor of iso-ball and single-action plays. Even when there is an initial pick-and-roll action, there is no off-ball movement from the other three players on the court. Love is left on an island in the play below.

Compare that to a similar play in last season’s NCAA Tournament. It’s quick, but all four players without the ball are moving at once, leading to an open 3-point attempt.

North Carolina is simply too stagnant right now. Love and Davis have combined to take 219 of UNC’s 426 total shot attempts on the season (51.4 percent), a number that jumps to 67.1 percent when you include Bacot. Over two-thirds of UNC’s shots are coming from three players, showing the imbalance in the offense.

The Heels are force-feeding their stars but doing so in stagnant offensive sets, which kills their efficiency.

This can be fixed, though! Heck, UNC did it last year, and they are incorporating several new pieces into the offense. But the Heels will keep playing like a shell of themselves until they generate more offensive movement.

Duke’s lack of 3-point shooting may limit its ceiling

Looking elsewhere on Tobacco Road, we find a simpler problem with the Duke Blue Devils — they just aren’t shooting well from behind the arc.

Duke has played a variety of different styles over the past decade as it fully embraced the one-and-done model, opting for superior talent over any kind of style fit. Coach K found ways to adjust, some years better than others, and now that burden falls on Jon Scheyer.

This Blue Devils team is big. Two of its top three freshmen — Dereck Lively II and Kyle Filipowski — are big men, with Mark Mitchell also defaulting to the frontcourt. A lack of guard play and depth was concerning enough that Scheyer got Tyrese Proctor to reclassify to the 2022 class to enroll in college a year early.

Sure, shooting was never going to be a strength, but they’ve been bad, particularly away from home. Duke is shooting 37.4 percent from long range at Cameron Indoor Stadium, a mark that would currently put them 65th nationally. In their four neutral site games, however, the Blue Devils are shooting a woeful 18.8 percent — which would be dead last in the country by a full 2.5 percent.

Players are also slumping. Jeremy Roach has hit as many 3-pointers over Duke’s last six games (six) as he did in their first two. Proctor and Dariq Whitehead, capable shooters in high school, have combined to go just 8-for-46 (17.4 percent) from beyond the arc. Grad transfer Jacob Grandison, who shot over 41 percent each of the last two years at Illinois, is at just 33.3 percent.

Duke will naturally improve with this area as freshmen become more comfortable playing at this level and more comfortable in Scheyer’s offense. But unless players really make a big jump, this area will likely remain a relative weakness throughout the season. Scheyer will have to get creative with lineups and/or play at a faster pace to help offset the lack of shooting.

Michigan State’s interior play may be a problem after all

Remember when we were gushing about Mady Sissoko after quality back-to-back outings against Drew Timme and Oscar Tshiebwe? It looked like Michigan State’s interior play was not going to be the problem it looked like it might be in the preseason.

Sissoko is averaging just 5.5 points and 4.0 rebounds in the four games since that Kentucky showing, numbers much more aligned with expectations after spending most of his first two seasons warming the bench in East Lansing. Freshman Jaxon Kohler isn’t doing any better. He has just 18 points on the season in total and is currently best known for intentionally stepping on an opponent’s foot.

The bad news for Tom Izzo’s squad is that there isn’t an easy solution. There is no reliable depth here outside of Sissoko and Kohler. It’s precisely why this was expected to be a problem! The Spartans just need both to simply play better and improve, that’s all there is to it. Sissoko has at least shown he can produce against the best competition — he now just needs to find that level consistently.

I broke down Gonzaga’s poor perimeter defense in last Monday’s Rauf Report, so I didn’t want to necessarily rehash that again — but it really is the biggest problem with the Bulldogs. Sure, the Zags don’t have a consistently dominant No. 2 offensive option next to Drew Timme. Regardless, they have found enough scoring by committee to maintain the nation’s most efficient offense, per KenPom. (You can read my initial analysis of Gonzaga’s perimeter defense here because the problems remain the same.)

Opponents are getting into the lane with ease and are both shooting — and making — a lot of threes. Here are their year-by-year defensive numbers since their first national championship game appearance in 2017, a six-year span in which the Bulldogs have arguably been the premier program in the sport:

This Gonzaga team is currently on track to be one of the worst in the entire Mark Few era and easily the worst during this run. Yes, not having Chet Holmgren protecting the rim hurts this group, but Holmgren’s absence has nothing to do with their defensive rotations or ability to contest jumpers.

Hunter Sallis may start to see more minutes as he’s the Zags’ best perimeter defender, but Rasir Bolton can’t come off the court a ton because of what he brings offensively. Anton Watson has started every game, giving Gonzaga a traditional two-big lineup to start, and that’s not helping. Few may have to embrace even more small-ball to help the Bulldogs improve in this area.

One of the biggest reasons I was so high on San Diego State in the preseason is because I thought its offense would be significantly improved with the additions of players like Darrion Trammell and Micah Parrish. This elite defense needed an influx of dangerous offensive weapons, and they went out and added some this offseason.

The problem is that San Diego State’s offensive system is still, well, bad. And calling it a system probably isn’t fair, either, because it has been a lot of isolation basketball through six games.

The Aztecs are 277th nationally in assist rate, which is the lowest they’ve ranked in the Brian Dutcher era. They are making a concerted effort to play faster and get out in transition more, which is obvious when watching them. That’s done to utilize this team’s insane length and athleticism, and to get easy baskets before the defense can get set up. Notably, their current pace is also the fastest of the Dutcher era.

But when opponents force San Diego State to execute its offense in the half-court, it’s brutally inefficient. There’s almost a “your-turn, my-turn” feel to it where their talented individual players rotate going one-on-one against their defender. That style isn’t going to work against the best teams they play, as seen in losses to Arizona and Arkansas in Maui.

The good news is that the Aztecs are still breaking in a lot of new pieces, and they’ve only played six games together. They’ll get more in sync and play better together as the season wears on. Matt Bradley, last season’s leading scorer, has been inconsistent, too.

I’m not overly concerned yet about where San Diego State will end up, but it’s clear there’s work to be done on the offensive end.