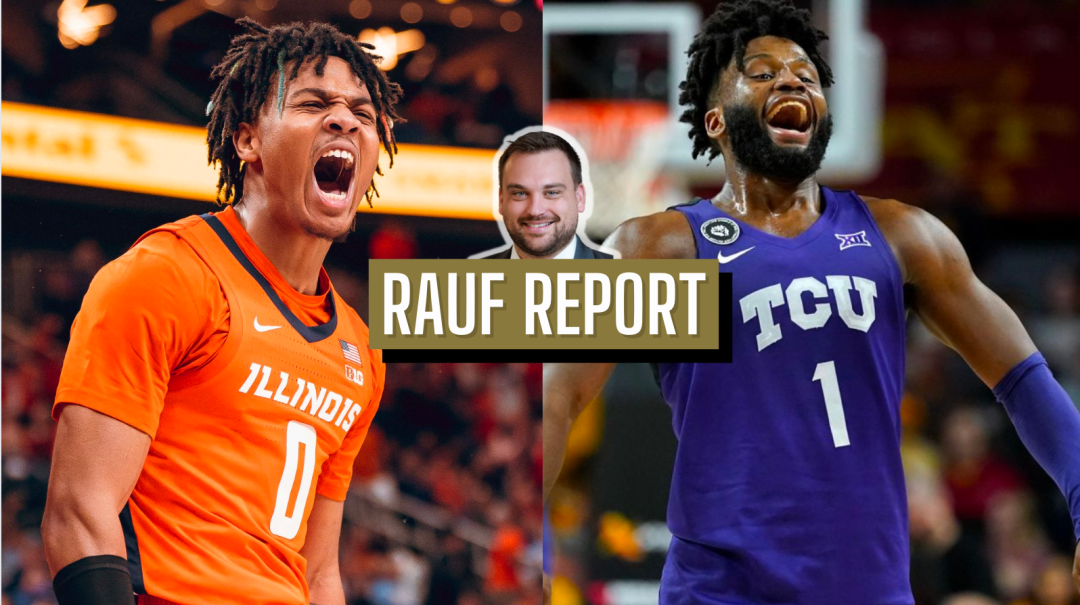 The Rauf Report highlights the biggest college basketball takeaways of the week, including in-depth looks at UConn, Illinois and more.

We’ve reached the slow December portion of the college basketball schedule following the frenzy of Feast Week. This happens every year around exam time — as the NCAA constantly reminds us that these are student-athletes, and the student part comes first! — but there were still some notable games and performances.

The overtime thriller between Illinois and Texas at the Jimmy V Classic was the game of the week, yet no team had a stronger performance than UConn’s dominant 75-54 road victory over Florida in Gainesville.

We’ll start this week’s Rauf Report with the Huskies, how good they are and why the conversation surrounding them has become a little tricky.

UConn is excellent, but we need to slow down

Writing something measured about a team skyrocketing up the rankings is hard when you believe said team is actually quite good. I want that to be clear: I think this UConn team is really good.

It starts on the defensive end, where the Huskies have a consensus top-10 defense that consistently suffocates opponents. Dan Hurley‘s squad turns teams over a good deal, but what they really want to do is limit 3-point attempts and ball movement. UConn applies intense perimeter pressure to make this happen and it’s working — it ranks in the top 10 nationally in both 3-point rate and assist rate allowed. Opponents are getting just 20 percent of their points from long range, an excellent sign for the Huskies.

UConn is able to do this because it has elite rim protection, too. If an opposing ball-handler is able to get through that perimeter pressure, he is met by either Adama Sanogo or 7-2 freshman Donovan Clingan on the inside. Sanogo has been one of the best interior defenders in the Big East throughout his career while Clingan would rank in the top-10 nationally in block rate if he played enough minutes. Those two make scoring at the rim very difficult for opponents.

That defense wouldn’t mean as much if the Huskies weren’t getting significant production on the offensive end, but the progression of the backcourt has eliminated that concern. Jordan Hawkins (13.5 points per game) and Tristen Newton (10.8 ppg) have both stepped up in a big way and are among the five players shooting at least 37.5 percent from three, an area where UConn has really struggled at times under Hurley.

The impact of those players has allowed the Huskies to utilize a deeper rotation than season’s past — they’re 59th in bench minutes after ranking 251st last season — which is also playing a role in this start.

“Depth is the key to who we are,” Hurley told reporters following the Florida victory. “Obviously, the identity is defense and to dominate the backboard. … But we can play a slow-down game, an up-tempo game. We can play big. We can play small. And the depth is what makes this whole thing work.”

But with all that being said, we need to pump the brakes on the hype train a little bit. Gary Parrish says UConn has a “possible undefeated season” ahead of it. Top Dogs, Field of 68’s UConn podcast, says the Huskies are “playing like the best team” in the country right now.

I’m not going to list everything on the Internet, but you get the idea. It is important to remember that, while UConn has been playing at an extremely high level, it has beaten just one likely NCAA Tournament lock in Alabama.

Wins over Oregon, Iowa State, Oklahoma State and Florida all felt good in the moment and are certainly good wins, but they aren’t the kind of wins that turn a team from “really good” to “unquestionably elite.” The only Quad-1 victory was against a Cyclones team that was just blown out by Iowa Thursday night.

I’m not suggesting UConn isn’t a national title contender or a top-5 team in the country. The Huskies have been very, very impressive. But it’s also important to look at this start in context and not get carried away. It’s a long season, and it feels like the discourse surrounding this group has gotten a little ahead of itself. We’ll see if UConn can keep the momentum going throughout the Big East season.

Speaking of Iowa State’s loss to Iowa, let’s dive into the Hawkeyes a bit. I was down on Iowa coming into this season because it felt like they needed Kris Murray to become his brother, Keegan, for the Hawkeyes to repeat last year’s success.

That hasn’t been an issue because, well, Murray is playing like this brother did and has been a star. Yet that win over the Cyclones came without Murray, signaling how much more there is to this roster.

Filip Rebraca stepped up in a huge way (22 points, 11 rebounds, four assists) but essentially produced at the same rate he has all season, just with higher usage — his offensive rating was actually just his third highest on the season. Four different players scored in double figures and six hit at least one 3-pointer (five made at least two). It was an all-around dominant display that was relatively balanced across those that saw significant minutes.

Now, Iowa is not going to shoot 52.2 percent from three every game, at least I don’t think. It’s also not going to jump out to 15-0 leads every game or face an offense that struggles like Iowa State’s did.

This did prove that Iowa is a lot more than just The Kris Murray Show, which should give everyone associated with the program a significant confidence boost and perhaps reset expectations on what this team can accomplish. Its only losses have come against Duke and TCU at neutral sites, and it has a top-10 offense. We’ll see if they end up in the Big Ten title race, but the Hawkeyes at least look like a top-25 caliber squad.

TCU is WHO WE THOUGHT THEY WERE

Speaking of TCU, I think it’s time to go back and re-evaluate the Horned Frogs. Many wrote them off following an opening week that saw them lose to Northwestern State after pulling off a 20-point comeback for one-point victory over Arkansas-Pine Bluff.

However, this is another instance where context matters.

Big 12 Preseason Player of the Year Mike Miles has only played in five of TCU’s eight games. His starting backcourt mate, Damion Baugh, has only appeared in two. Another starter, Emmanuel Miller, has only appeared in five. Things were rough for the Horned Frogs at the start of the season and that’s reflected in their overall stats from that opening week compared to the team we’re seeing right now.

TCU is playing better on both ends of the court — and doing so against better competition — since those opening week struggles. The end of November included double-digit victories over both Iowa and Providence, the two best teams Jamie Dixon‘s squad has faced so far.

If you look at just those numbers from the last five games, the games in which the Horned Frogs have been most healthy, that looks like the what we expect from a preseason top-15 team. Even their 3-point shooting during this stretch — known to be TCU’s biggest weak spot — would rank 128th nationally, right behind teams like Purdue, UAB and Marquette.

Also, Northwestern State is off to an impressive 7-2 start! It will never be a “good loss” for the Horned Frogs, but the Demons have proven to be much better than expected in head coach Corey Gipson’s first season.

TCU is and will be fine as long as it stays healthy. Don’t be surprised when the Horned Frogs are a force in the Big 12 race just like we originally expected.

Now let’s get to Illinois, the victorious side in the game of the week we discussed at the top. The Illini earned the win because of the versatility in their offensive attack, something they’ve lacked in past seasons that hurt them in the NCAA Tournament.

Ayo Dosunmu and Kofi Cockburn were excellent college players, but Illinois didn’t have consistent options outside of them. Plus, as dominant as Cockburn was inside, his lack of mobility was easy to exploit on the defensive end. Other factors are at play, too, but that lacking versatility is a big reason why the Illini haven’t made it out of the NCAA Tournament’s first weekend under Brad Underwood.

This team has that element. Matthew Mayer scored 21 points against the vaunted Texas defense while showcasing his ability to create shots for himself off the bounce. Terrence Shannon has done that all season but showed up in a big way against the Longhorns, scoring 12 of his 16 points in overtime.

Freshmen Jayden Epps came off the bench and made plays late. RJ Melendez already has three games with at least 13 points and Coleman Hawkins already has a triple-double, both of whom were also crucial to the comeback.

Every team that makes a long run in March needs perimeter players who can create for themselves. It has essentially become a pre-requisite. Last season’s Final Four teams are the perfect example with all of them boasting multiple perimeter creators. This Illinois team does now, too, making it more suited for postseason success than some of its past teams.

Dayton has been the season’s biggest disappointment

North Carolina has been heavily discussed over the past week as the season’s biggest disappointment, but that may be overlooking this Dayton team.

The Flyers entered the season as A10 favorites with consensus top-25 expectations, returning virtually everyone —seventh nationally in minutes continuity, per KenPom — from last season’s 24-win team. Instead, Dayton is off to a 5-5 start that includes:

We just discussed how important perimeter play is in college basketball and that’s where the Flyers are struggling in the most. They rank 345th in 3-point shooting, 295th in turnover rate and 321st in steal rate. Their offense is also 127th in KenPom’s adjusted offensive efficiency metric, a mark that would be the program’s worst since the 2015-16 season.

All of this culminated in an embarrassing 77-49 loss to Virginia Tech on Wednesday, showing just how far this group still has to go. The collective and individual leaps we were expecting these young players to take simply hasn’t happened. If anything, the Flyers have taken a step back.