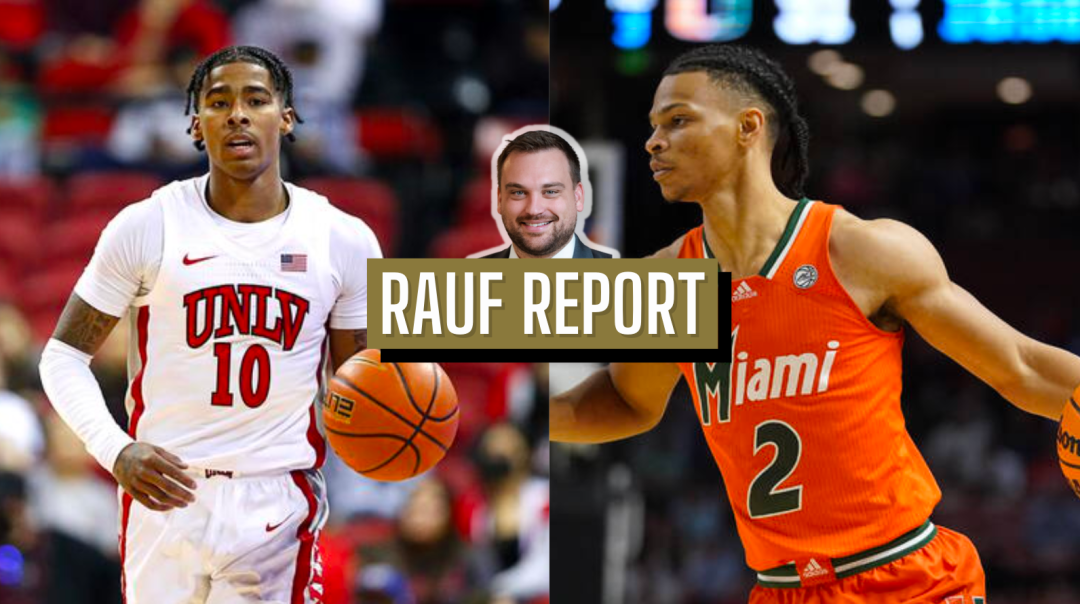 Our latest Rauf Report looks at the Tennessee offense, the freshman phenom reviving Villanova and a few teams that are making themselves relevant.

There is a new No. 1 team in college basketball following Houston’s home loss to Alabama on Saturday, giving a third program the chance to sit atop the polls. Perhaps ironically, the Crimson Tide will have been the cause of both changes (they also beat UNC in the Phil Knight Invitational).

Purdue is the new top dog this week, but UConn and Virginia — and heck, even Nate Oats’ squad — can all make legitimate cases that they’re the best team in the country.

Last year’s Alabama-Houston game, held in Tuscaloosa, was arguably the game of the season, one that Alabama also won. But after that, the Tide started falling apart. They went 11-13 the rest of the way including a first-round NCAA Tournament loss to Notre Dame.

This Alabama team is also off to an 8-1 start, yet how it beat the Cougars signaled this season’s team won’t fall apart in a similar way. Down 15 in the second half, the Tide showed the kind of mental toughness they lacked in 2021-22.

“This is one of those character wins that shows that our guys are going to keep fighting no matter what the score is,” Oats said postgame. “We could have easily given up down 15. The start of the second half wasn’t great. We made some changes with the bench guys. Hung in there, kept clawing away at the lead, finally able to take the lead and then we pulled away from them.”

However, some other teams still have the same issues that plagued them a year ago. Tennessee is one of them, and that’s where we start this week’s Rauf Report.

The Volunteers have had the same blueprint for success since Rick Barnes took over the program in 2015: be physical and play elite defense. Unfortunately, they’ve also been a little rough offensively.

Tennessee’s struggles on offense have kept the Vols from reaching their perceived potential in March. It looked like last season was going to be the breakthrough after winning the SEC Tournament; instead, Tennessee failed to reach the second weekend of the Big Dance once again. With nearly half their minutes returning and more high-profile freshman in the fold, the program maintained lofty expectations in the wake of last year’s disappointment.

The Volunteers appear to be backing it up so far. They’re a consensus top-10 team among virtually every poll and ranking system. And that’s not off-base! The Vols have two top-15 wins (Kansas, Maryland) at neutral sites, a pair of other quality wins (Butler, USC), and the nation’s best defense according to both KenPom and Torvik.

Digging a little bit deeper, however, it’s clear to see those offensive problems are just that: problems. Below is a breakdown of how the Vols performed against the five KenPom top-75 teams they’ve played compared to the rest.

The Tennessee offense has hummed against bad competition, but the Vols have struggled mightily when playing good teams. With Arizona on deck this Saturday and then SEC play starting after Christmas, this is a problem that needs to be fixed sooner rather than later. If they continue, the offensive woes could come back to bite the Vols just as they did in the loss to Colorado.

Villanova is a different team with Cam Whitmore

It may have gone unnoticed but, since Villanova went winless at the Phil Knight Invitational, the Wildcats haven’t lost. On the contrary, they have picked up wins over Oklahoma, Penn and Boston College. Uncoincidentally, star freshman Cam Whitmore made his debut following the PKI tournament, and his presence has completely opened up Villanova’s offense.

Whitmore has come off the bench in all three games, but he is averaging 15.7 points, 5.3 rebounds and 1.7 steals in just 23.3 minutes per game. His versatility (35.3 percent on 3-pointers) and athleticism at his size give the Wildcats the playmaker and shot creator they’ve been desperately lacking.

Having that dynamic threat to draw the attention of opposing defenses has increased Villanova’s efficiency in every way. The Wildcats are shooting better — up roughly nine percent from downtown and roughly five percent overall — and have leaped seven points in adjusted offensive efficiency.

It should go without saying that adding a projected lottery pick to your lineup makes it better, but we often don’t see them make this big of an impact.

Kyle Neptune’s offense is predicated on ball movement stemming from someone driving towards the paint. When you don’t have anyone who can break down their individual defender, you have no one that will force the defense to collapse, thereby creating opening for others. Whitmore is that guy, and he’s filling the role at a high level.

How Nebraska defended Zach Edey and why it worked

Nebraska nearly pulled off the shocker of the weekend, taking Purdue to overtime before ultimately falling in the extra period. The Huskers didn’t play great on the offensive end, shooting just 31.9 percent from the floor and 28.1 percent from deep, but made it a game because of their defense — particularly how they limited National Player of the Year frontrunner Zach Edey.

Now, Edey was still dominant overall — 17 rebounds and seven blocks — and his performance did nothing to take him off-course for the Naismith trophy. On the other hand, he was held to a season-low 11 points on a season-low seven field goal attempts. He also tied a season low with four free throw attempts.

The 7-4 junior is thought to be the most unstoppable player in college basketball, yet Nebraska severely limited him offensively, giving themselves a legitimate chance to win in the process. Other teams will undoubtedly try to copy their strategy.

So, what’d they do that worked? Fred Hoiberg had Edey’s primary defender half-front him to try to deny the entry pass, while the most weakside help defender shaded behind the big man in case Purdue attempted a post entry over the top.

As CBBReview’s Joe Jackson lays out, Hoiberg’s gameplan was basically to force the rest of Purdue’s roster to make plays. He’d rather take his chances there (even if his defense was scrambling) than to let Edey go one-on-one.

After the game, Derrick Walker — tasked as the primary defender on Edey when they shared the court — praised his teammates for providing as much help defense as they did.

“I’m proud of what I did tonight with guarding the big fella, but I’m more proud of my teammates for helping me guard him,” he told reporters. “Just being at the big every time he catches the ball.”

Other teams are now going to try to defend Edey and Purdue this way because of the end result Nebraska nearly got. It’ll be on Matt Painter and the Purdue coaching staff to adjust — and on the Boilermakers’ backcourt to continue to punish teams for leaving them open.

Miami deserves to be ranked

It took longer than it probably should have, but an Elite Eight team that returned nearly half its minutes and landed two of the top transfers in the portal is finally earning some national respect.

Miami moved to 10-1 on the season after beating NC State on Saturday, one of the four KenPom top-70 wins the ‘Canes have on the season. The lone loss came on a neutral court to Maryland — a team we now know to be pretty good! As a result, Miami finally made its debut in the AP poll as the nation’s No. 25 squad.

Isaiah Wong picked up where he left off last season and leads Miami with 16.2 points and 3.9 assists per game, proving to be one of the nation’s best shot-creators and tough shot-makers. Jordan Miller (15.5 ppg, 6.0 rpg) and Nijel Pack (11.3 ppg, 3.0 apg) form one of the nation’s best perimeter trios with Wong, while Norchad Omier (13.7 ppg, 10.0 rpg) has been the kind of interior force Miami hasn’t had in recent memory.

The only thing the Hurricanes lack is elite victories. They’ll get their chance on Dec. 20 when they host Virginia, but no matter how they perform in that game, Miami has proven it can consistently play at a high level. That alone should take them a long way in a lackluster ACC.

The Rebels are 10-0 for the first time since 1990-91 after knocking off Washington State on Saturday, adding to their list of solid wins that includes Dayton and Minnesota. Kevin Kruger is in just his second season in charge at his alma mater, but he has already revitalized the program back into relevance.

“Every game is going to be a bigger challenge, but hopefully we’re excited and hungry for that opportunity and those eyeballs, because it should still be fun,” he told reporters following the victory over the Cougars.

Guards Keshon Gilbert (15.5 ppg, 3.7 apg) and Elijah Harkless (14.6 ppg, 4.1 rpg) are capable of playing with anyone in the country and are phenomenal two-way players. Kruger says Gilbert sets the tone in that regard for the team and it paid off with a 25-point performance against Wazzu.

“The mood and the reputation of our team is starting to form a lot to the way Keshon Gilbert plays,” Kruger said. “When you’re the primary ballhandler, the point guard, you’ve got those responsibilities, and I don’t think there’s anybody I’d rather have as the embodiment of the way our team plays.”

It remains to be seen just how good the Rebels are — their offense can still be disjointed, and they haven’t faced a KenPom top-50 team yet — but they are one of the nation’s final seven unbeaten teams, have a top-40 defense and are second nationally in forcing turnovers.

Even if UNLV comes back down to earth a bit, the Rebels will be relevant nationally when Mountain West play starts for the first time since Clutch Jackson was conquering the virtual hardwood during the pandemic.