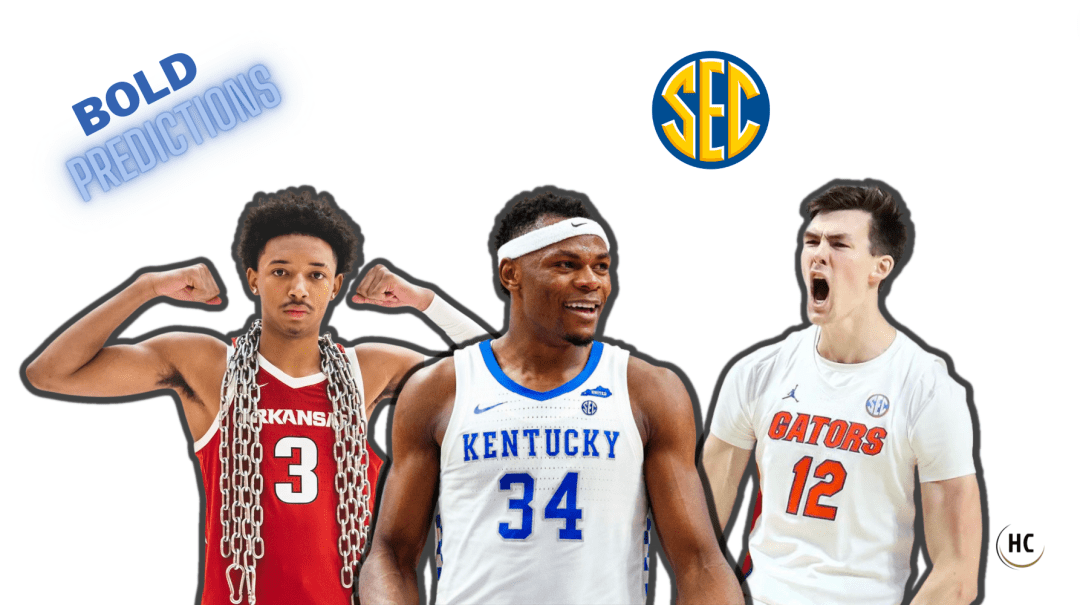 The SEC is no longer an afterthought in college hoops. This season, the league projects to be as strong at the top as any.

The SEC will always be a football conference first and foremost but the league has been as good as any on the hardwood for several years now. The SEC has sent at least six teams to each of the last four NCAA Tournaments with four different programs reaching the Final Four in the last decade. This doesn’t even include Arkansas, which is coming off back-to-back Elite Eight appearances.

The SEC projects to stay at the forefront of the college basketball world this coming season.

Oscar Tshiebwe is the first National Player of the Year to return to college since Tyler Hansbrough, which has Kentucky on the shortlist of Final Four favorites. The aforementioned Razorbacks welcome a top-5 recruiting class and are ranked in the preseason top 10. Tennessee, Auburn and Alabama aren’t far behind.

With so much talent across the league, there figures to be plenty of unexpected twists and turns. Where might those take us by the end of the season?

Let’s start with the Wildcats and Tshiebwe because, as good as he is, I don’t think he’ll end up being Kentucky’s most important player. He and star guard Sahvir Wheeler will still be dominant, but Kentucky will need one of its freshman wings — most likely Cason Wallace — to step up if this team is going to reach its full potential.

Tshiebwe is dominant, but we saw last year that Kentucky couldn’t go to him with the season on the line against Saint Peter’s. That isn’t a knock on Tshiebwe — big men almost always can’t be the one to make a play at crunch time because they oftentimes don’t operate along the perimeter. Perimeter players make those plays because they’re the ones with the ball in their hands.

In this case that’s Wheeler, but Wheeler is more of a playmaker than a scorer. He’s not someone who can consistently create his own shot. Cason Wallace showed that ability in high school and Chris Livingston did to an extent, too. Those freshmen project to start on the wings and their production will determine Kentucky’s success.

Again, not a knock a Tshiebwe. This is more about how awesome Nick Smith could be as Arkansas’ point guard. He can score from all three levels comfortably and, at 6-4, has the quickness and length to get into the lane virtually whenever he wants. From there, he’s dynamic at either finishing at the rim or creating a shot for a teammate thanks to his high basketball IQ.

The effortlessness and effectiveness with which Smith plays is tantalizing given his raw physical tools and developed skill set, and it is why he’s projected to be a top-10 pick in the 2023 NBA Draft.

He’s the most talented player Eric Musselman has had as a college coach, which is bad news for the rest of the SEC.

Remember JD Notae’s late surge last season? He became Arkansas’ lead guard and gradually became an All-American level player as he got comfortable. Smith might need a ramping-up period — he has to adjust to the college game and get used to playing with a slew of new teammates — but I fully expect him to make a similar surge once he settles in.

Speaking of settling in, I think Auburn’s new frontcourt is going to do just that. A lot has been made of the Tigers losing Jabari Smith and Walker Kessler but more needs to be said of what five-star freshman Yohan Traore and Morehead State transfer Johni Broome can do.

Traore appears to be the perfect big man for Bruce Pearl’s up-tempo system. He’s 6-10 and runs the floor incredibly well, is a terrific rebounder and is very skilled around the rim. Traore also has the strength to hold his own down low with the versatility to take opposing bigs away from the basket, too.

Broome has been one of the best mid-major players each of the last two years at Morehead State. He’s a double-double machine who averaged one (16.8 ppg, 10.5 rpg) last season and will help replace some of the rim protection Auburn lost. Broome blocked nearly four shots per game as a sophomore with a block rate that was seventh nationally.

As we saw on Auburn’s Israel Summer Tour, he might be the best low post scorer Pearl has had during his tenure on The Plains.

This duo may not have the kind of NBA upside that Smith-Kessler did but they could be just as effective in Auburn uniforms.

The top of the SEC is going to be very good. Five teams rank in the top 20 and another three (Florida, LSU, Texas A&M) have legitimate NCAA Tournament hopes.

But the other six teams in the league could be bad.

Georgia, which won just a single SEC game a season ago, has eight newcomers on the roster and a new head coach in Mike White who underachieved at Florida. The Bulldogs project to have major offensive issues even with the additions because the top-end talent simply isn’t there. Vanderbilt had that top-end talent in Scotty Pippen Jr., but he’s now with the Lakers, leaving the Commodores with questions of their own.

Missouri was bad last season and, while they landed Isiaih Mosley from Missouri State, there doesn’t appear to be much reliable talent around him for new coach Dennis Gates. The same can pretty much be said for Mississippi State, which is starting a rebuild in Chris Jans’ first season. As for Ole Miss, well, its returning core won four SEC games in 2021-22 and now has an incredibly young bench.

South Carolina’s prospects don’t look that much more promising. With a new head coach (Lamont Paris) and several transfers out of the program, it’s no wonder why most are picking them to finish near or at the bottom of the league. But most are overlooking some promising pieces.

GG Jackson, the top 2023 prospect who reclassified to join South Carolina this season, is one of the most talented players in the entire SEC. Raw, yes, but he is someone who can produce against any caliber of talent. Ohio State transfer Meechie Johnson showed flashes in the Big Ten while Hayden Brown was one of the SoCon’s best players while at The Citadel. There are pieces here that fit Paris’ system.

The Gamecocks could be just good enough in comparison to the other teams to scratch out a fair share of wins. If the bottom of the SEC is as bad as it projects, an impact player like Jackson could make all the difference.

New head coach Todd Golden quickly overhauled his roster and upgraded the perimeter. Kyle Lofton, a three-time All-A10 selection at St. Bonaventure, will run the point with Belmont transfer Will Richard and VMI transfer Trey Bonham serving as productive, high-upside off-ball options that will greatly improve Florida’s shooting, an Achilles’ heel for the Gators a year ago. But no one has more upside than LSU transfer Alex Fudge, whose elite athleticism and size (6-8) could make him Florida’s best perimeter defender right away.

But Golden’s biggest offseason win might’ve been keeping some of the Gators’ current core intact. Big man Colin Castleton is an All-SEC caliber player who will be the focal point of the offensive attack, while Kowacie Reeves enters his sophomore season as a real breakout candidate.

It’s fair to expect Florida to be a step behind the SEC’s top tier at the start of the season while this roster gets its footing under Golden. However, the Gators have the talent, experience, and coaching of a top-25 team. We have Florida 23rd in the HeatCheckCBB Preseason Poll and The Almanac slots the Gators at No. 25. Expect the AP poll to catch on sooner or later, too.