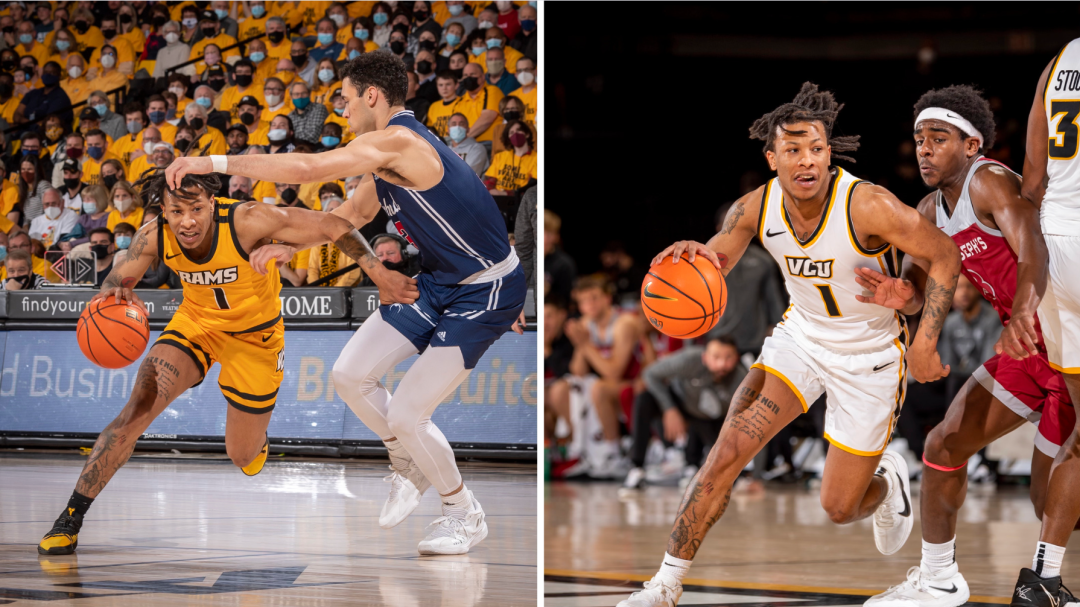 Ace Baldwin’s encore: What to expect of VCU’s star point guard in Year 3

VCU star point guard Ace Baldwin is back with a chip on his shoulder after a devastating injury and remarkable recovery.

The slang “built different” gets thrown around these days, especially in the sports world. It’s no wonder why — every athlete wants to be known for his or her toughness, strength and resolve.

But for VCU’s Ace Baldwin, well, he might actually be built different, both mentally and physically.

The junior point guard ruptured his Achilles tendon in early June of 2021 — an injury notorious for its crippling and lingering effects. Yet, despite a projected lengthy recovery, he came back to the court just six months later on Dec. 8. But Baldwin didn’t just return. He excelled, making the All-Atlantic 10 Second Team at the season’s end. If that shocks you, you’re not the only one.

“I’m not gonna lie to you, it surprised me [how quickly I recovered],” Baldwin told me. “The doctors said I wasn’t going to be able to play until January or February. But I just attacked my rehab.”

The floor general said workouts on the VersaClimber and the Concept2 SkiErg kept him engaged early in the process and in shape. But Baldwin also cites his desire “to get back out there with [his] teammates” as something that helped him maintain a strong dedication to and a positive attitude toward his rehabilitation.

And little by little, his body healed.

“I just wanted so badly to be out there,” he said. “But in practice, I was moving quicker and with more explosiveness. I started doing little stuff, just getting ready to jump out there for the game.”

It didn’t take long for Baldwin to get comfortable once he returned to action. He noted a contest at Old Dominion — his second game back — as the moment when he felt 100 percent for the first time since the injury. An 11-point, 5-assist and 4-steal performance (and ODU coach Jeff Jones) gave credence to that notion.

Once conference play started, Baldwin shed his minute restriction and led the A10 in steal rate and finished fifth in assist rate, per KenPom. He also increased his 3-point percentage from 26 as a freshman to 41.3 as a sophomore. Few players in the A-10 can contain Baldwin when he gets into the lane. He creates paint touches at will and showcases an incredible IQ, knowing when to score and when to find an open teammate. In particular, Baldwin’s live dribble passing is special — he makes no-look dimes off of either hand look routine.

With him back in tow, VCU has positioned itself to contend in the A10. Though, somewhat surprisingly, it has generated nowhere near the preseason buzz bestowed upon conference counterparts Dayton and Saint Louis. Baldwin said that gives “fuel to the fire,” although ultimately, “[the team doesn’t] worry too much about rankings.”

Instead, he’s focused more on his team and what it must do to succeed.

Redshirt sophomore Jamir Watkins, who is coming off an ACL injury, drew the most praise from Baldwin. “The way he rebounds, we need that big time,” he said. “I saw him in practice [this offseason] and thought ‘I didn’t know ‘Mir crashed the glass like that.'” Baldwin also complimented the 6-7 wing’s three-level scoring, adding that he can replicate the production of the departed Vince Williams.

In the backcourt, both sophomore Jayden Nunn and Michigan transfer Zeb Jackson have impressed him. “I kind of took [Nunn] under my wing,” Baldwin shared. “But I don’t tell him to do what I do. He’s more out there to make shots. But I do tell him to have the same type of defense [as me]. Play disciplined and cut back on bad fouls.” Regarding Jackson, the point guard described him as “super explosive […] kind of like Russell Westbrook with a jump shot.”

When asked about any under-the-radar prospects, Baldwin immediately highlighted freshman big man Tobi Lawal: “He can jump out of the gym and block a ton of shots.”

That shot-blocking acumen could be what keeps him on the court. Especially because defense will be the Rams’ calling card once again this season. As Ky McKeon covered in The Almanac, VCU has finished in the top 15 of KenPom’s defensive efficiency metric in three of the past four years. Most notably, per McKeon, the Rams use a heavy dose of full-court press while still managing to contest 3-pointers and limit opponents’ transition opportunities.

And of course, Baldwin is the catalyst on that end of the floor.

“My job is to put fear in the hearts of opposing point guards. Any point guard I play against, they don’t play defense like me.”

This article originally ran in a condensed version in the October 31st edition of The Field of 68 Daily. Images courtesy of VCU Athletics.