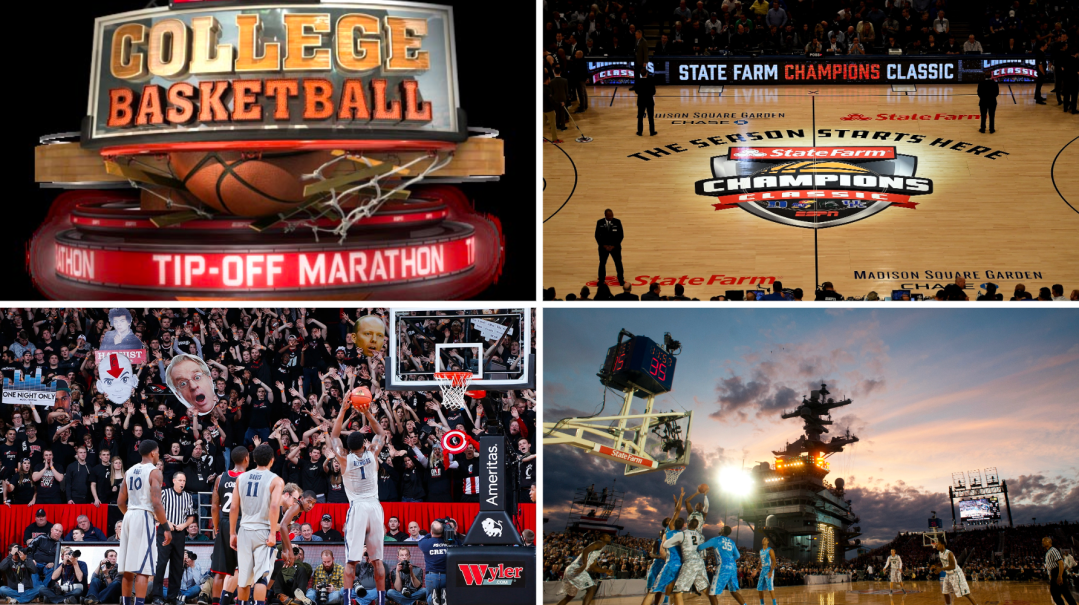 Four ways college basketball should spice up its November schedule

College basketball’s opening week is a snoozer this season. Let’s check out four ways that the sport could improve its November schedule.

The new college basketball season tips off Monday with 126 matchups between D1 programs.

The must-watch contest of the evening? Possibly Memphis-Vanderbilt on ESPN+. Or maybe it’s the mid-major showcase between Oral Roberts and Saint Mary’s on the WCC Network.

It’s no disrespect to those four teams, all of which could hear their name called on Selection Sunday. But the point here is obvious: college basketball needs to overhaul its November schedule.

One of the obvious explanations for the lackluster opening week schedule is that the Champions Classic doubleheader was pushed back a week due to Election Day. But even if the Duke-Kansas and Kentucky-Michigan State fell during the first week, the greater point stands: college basketball needs to better market itself throughout the 11 months not named March.

Below are four ways college basketball should beef up the November schedule and give fans something to cheer about.

Add extra games to the preseason

Allow Field of 68’s Jeff Goodman to succinctly explain why there are so few quality matchups in the early part of the season:

In today’s era of college basketball, rosters rapidly turn over from season to season. According to KenPom, just 25 teams last season brought back at least 75 percent of their minutes from the previous year. In each of the last eight seasons, the national continuity rate was below 50 percent.

It takes time for teams to mesh, especially these days. And because the tournament selection committee assesses a team’s entire body of work come March, an early blemish — take Dayton’s 1-3 start last season, for example — could prove costly. With additional preseason opportunities, coaches will have more time to analyze their rotations and tweak their rosters without having to learn on the fly once the regular season rolls around.

Start the season on a Friday

But with no NFL action and limited college football contests on Fridays in November, it should be a no-brainer to return to a Friday opening night for college hoops. The last time a college basketball season opened on a Friday was in 2017 with an ESPN doubleheader featuring No. 25 Texas A&M vs. No. 11 West Virginia and No. 21 UCLA vs. Georgia Tech. According to ShowBuzz Daily, the pair of matchups were among the most-viewed telecasts in the country that evening, only slotting behind Bucks-Spurs (ESPN) and Stanford football’s upset of No. 9 Washington (FS1).

If it’s about TV ratings and broadcast slots, college basketball can be largely unopposed on Friday evenings in mid/early November. With additional preseason exhibitions (as outlined above) helping teams get up to speed, maybe the Champions Classic could move back to opening night like it did last year, ushering in the new season with two high-level matchups between the nation’s biggest brands in Duke, Kentucky, Kansas and Michigan State.

Maybe we don’t need a return of the beloved 24-hour marathon. But there is no reason why there can’t be at least 12 straight hours of high-level basketball early on in the season.

In fact, the solution could be relatively simple. Let’s take the top early-season MTEs (multi-team events) and stack them up on the Wednesday before Thanksgiving, presenting an all-day hoops showcase early in the campaign with zero football-related broadcasting obstacles.

Using KenPom preseason rankings, we can generate the projected championship matchup for the major annual MTEs this season. With broadcasting channels and approximate championship tip times from years past, a Thanksgiving Eve hoopapalooza could look a little something like this:

This revitalized Feast Week schedule would turn Thanksgiving Eve into a marquee day in college basketball’s early calendar, something the sport severely lacks. The only major obstacle here is ESPN’s Wednesday doubleheader, but even then the network could adjust the schedule between ESPN and ESPN2 as necessary.

Since high-major teams typically host a handful of in-state or neighboring teams throughout the nonconference schedule, why not turn these matchups into annual tournaments?

Let’s lay down a simple framework.

In this scenario, every school wins. The high-major programs get to host “buy games” in front of their home fans, the at-large hopefuls have opportunities to secure resumé-boosting wins, and the low-majors receive guarantee money and face off against big brands.

With so many teams packed into different pockets of the country, this style of tournament could be replicated from coast to coast. It would also fuel local rivalries and spice up the early part of the season — just imagine these Ohio-based fanbases using head-to-head results as bragging rights!

It’s time for college basketball to reimagine its November schedule.