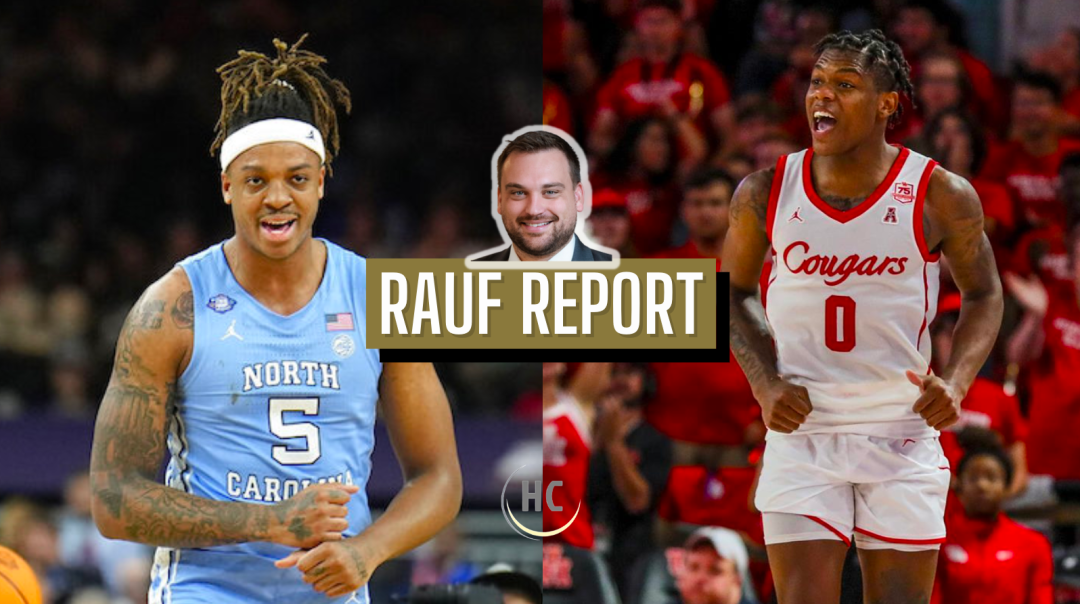 Rauf Report: The only eight college basketball teams that can win the 2023 national championship

Every team is hoping to win a national championship this season, but the Rauf Report details the only eight that can get it done.

One of the most beautiful things about college basketball is that every single (eligible) team has the opportunity to win a national championship, and everyone is able to carry that dream into March.

Of course, that dream is far more realistic for some than others.

Nine of the last 11 national champions started the season ranked in the top 11 of the preseason AP poll, with the 2011 and 2014 UConn teams being the lone exceptions. But it’s not as easy as just taking a look at the top 11 — some teams are much better equipped than others to achieve and maintain a high level of success.

There are always some busts (say hello to last season’s teams at Texas and Michigan) and there are always some breakouts. Still, most title teams start with high expectations and certain characteristics: strong guards that can create off the bounce, experienced leaders and a balanced play style. Every team plays differently and employs different points of emphasis — no one is going to compare 2018 Villanova to 2019 Virginia — but championship teams excel on both ends, even if they lean one way or the other.

Since the 2016-17 season, I have been putting out a definitive list of teams that I think have the tools to climb the sport’s highest mountaintop, and each season the eventual champion has been on this list.

This is not a list of the teams I think are the best in the country right now. But these are the only ones I believe can get there by early April. Some might flame out quickly (see those aforementioned Texas and Michigan teams) yet, if certain things click, these eight squads have the talent to cut down the nets in Houston.

— Bracketology: 10 teams with critical opening weeks for their at-large hopes in 2023-23

I know the Tar Heels have had a rocky start to the season, but their potential is still obvious. They flashed it by outscoring the College of Charleston by 23 points in the second half of their victory on Friday.

North Carolina might be the most polarizing team at the top of the polls. There are those who believe the Heels simply got hot at the right time last season and this group will revert back to the bubble team it was in late February. Then there are others that believe that late-season surge is more indicative of who they are.

I fall in the latter category largely because that “surge” wasn’t just an NCAA Tournament run. UNC went 17-4 over the final two and a half months of the season and ranked 11th nationally in efficiency during that stretch, per Torvik. That’s the mark of a high-quality team (one that had a first-year coach settling into his new role), one which brought its core back for this season. The Heels rank in the top 20 nationally in experience and minutes continuity.

But even if that level of play isn’t sustainable, we’ve already seen these players make a run. You could argue they were an Armando Bacot ankle injury away from having already won a championship. They’ve shown they can do it — and they might be able to do it again.

Can I interest you in an elite defensive team with the best guard in the country, one of the nation’s best coaches and a defined style of play that has allowed a program to consistently reel off long NCAA Tournament runs?

Houston is the team I’m most confident in making a long tournament run because of how steady the Cougars are. Tramon Mark, Marcus Sasser and Jamal Shead combine to form the nation’s best backcourt and are now paired with a five-star talent inside in freshman Jarace Walker.

The Cougars made the Elite Eight this past March despite Mark and Sasser being out with injuries — that’s how good its defense was. It was the third-straight tournament in which Houston had advanced to at least the Sweet 16. This is Kelvin Sampson’s most talented team, so it’s easy to think another long stay in the Big Dance is in order.

Houston is looking to become the first program to win a national title in its home city since John Wooden’s 1972 UCLA team did it, and it has the pieces to do so.

The 2021 national champions have a roster fit to compete with anyone.

LJ Cryer, Adam Flagler and Keyonte George form a top-3 backcourt in the country. Cryer and Flagler are the experienced and efficient veterans, but George has the potential to be the kind of star that can win key games by himself. The five-star prospect scores effortlessly at all three levels and has shown an excellent propensity to make plays for others, posting seven assists in each of his first two collegiate games.

Senior Flo Thamba holds down the interior and was also a member of that 2021 championship team and Scott Drew has complemented him with a pair of versatile forwards in transfers Jalen Bridges (West Virginia) and Caleb Lohner (BYU).

Drew has this program consistently performing at such an elite level that their floor is always super high. With a player like George, their ceiling becomes a second title over the last three seasons.

I don’t understand why some consider last season to be a failure for UCLA. Armed with incredibly lofty preseason expectations coming off a Final Four berth, the Bruins battled injuries all season and still made it to the Sweet 16, where a few late shots from UNC’s Caleb Love essentially kept the Bruins from returning to the season’s final weekend.

A good portion of that group is still around, led by Tyger Campbell and Jaime Jaquez. Throw in high-upside pieces like Jaylen Clark and David Singleton stepping into larger roles and the Bruins will be successful again.

What differentiated last year’s Bruins from the two seasons prior was Johnny Juzang. He was a big-shot maker who could create for himself and carry the scoring load. As good as Campbell and Jaquez have proven to be throughout their college careers, neither can really be the guy on a national championship-level team.

This is why Amari Bailey is one of the most important players in the country this season. The five-star prospect showed the ability to be that guy in the high school ranks and has slid into the starting lineup. That’s a lot to put on a freshman, but it’s hard to imagine the Bruins being able to sustain an elite level of play without him becoming a star sooner rather than later.

Kentucky was likely going to be a national championship favorite either way, but Oscar Tshiebwe‘s decision to return to school only solidified the Wildcats in that regard.

With him anchoring the middle, an All-SEC point guard in Sahvir Wheeler leading the show, a top breakout candidate in Jacob Toppin and an improved bench, UK’s only potential weakness comes on the wing. It’s why I wrote that Tshiebwe, the reigning National Player of the Year, isn’t Kentucky’s most important player.

That, my friends, is Cason Wallace.

We saw during Kentucky’s March struggles last season that they needed more perimeter scoring. It’s tough to rely on Tshiebwe or any other big man when you need a bucket, because they don’t have the ball in their hands. Wheeler is also more of a playmaker than a scorer and can’t consistently create his own shot.

Wallace has shown the ability to do so. The Wildcats don’t need him to be a superstar — they just need him to consistently add that missing element to their offense. The five-star prospect might turn into a superstar if he’s able to be that puzzle piece (which I’m sure Kentucky will welcome), and he’s the only one who currently appears to have the skillset and capability to fill that void.

Am I crazy for putting Texas on this list two years in a row? Maybe! But there is a lot to like about this roster.

The Longhorns should be elite defensively with the versatility they have and scheme Chris Beard has implemented. They’re extremely experienced with six seniors in the rotation and have a talented backcourt in Marcus Carr and Tyrese Hunter.

The addition of Hunter is where things start to get interesting for Texas. Last season’s team was full of transfers — they basically made up Beard’s entire rotation. The Longhorns have a strong returning core now in Carr, Timmy Allen, Dylan Disu and Christian Bishop, yet it’s the potential of the newcomers that again give Texas a championship ceiling.

Hunter was one of the best perimeter defenders in the country as a freshman for Iowa State last season. Beard knows he’s going to get great play on that end of the court from him. His offense has been inconsistent, though, and finding consistency could unlock a whole other level for this group.

The same goes for five-star freshmen Arterio Morris and Dillon Mitchell. Both have the pure offensive talent needed to be real difference makers at this level. Are they able to get there this year?

We’re combining these two because the reasoning is the same. These programs welcomed the top two recruiting classes in the nation and have multiple projected first-round picks among them. Duke’s five-state trio includes big men Dereck Lively II and Kyle Filipowski alongside wing Dariq Whitehead, while the Hogs bring in their own talented troika led by guards Nick Smith and Anthony Black as well as forward Jordan Walsh. Both are relying on those groups to fill almost all key roles.

Only two teams have managed to win a title with that recipe in the one-and-done era — 2012 Kentucky and 2015 Duke — yet both also had veteran leaders that guided those young players. That Kentucky team had Doron Lamb, Terrence Jones and others, while that Duke squad featured Quinn Cook, Matt Jones and Amile Jefferson.

Both these freshmen classes are good enough to get there and both also have experienced pieces around them. Duke’s returning cast led by Jeremy Roach, the starting point guard of last season’s Final Four squad, and a pair of grad transfers in Jacob Grandison (Illinois) and Ryan Young (Northwestern) have also stepped in. Arkansas returns Davonte Davis and brought in experienced transfers like Ricky Council IV and Makhi Mitchell.

The recipe is there for these two — if everything clicks.