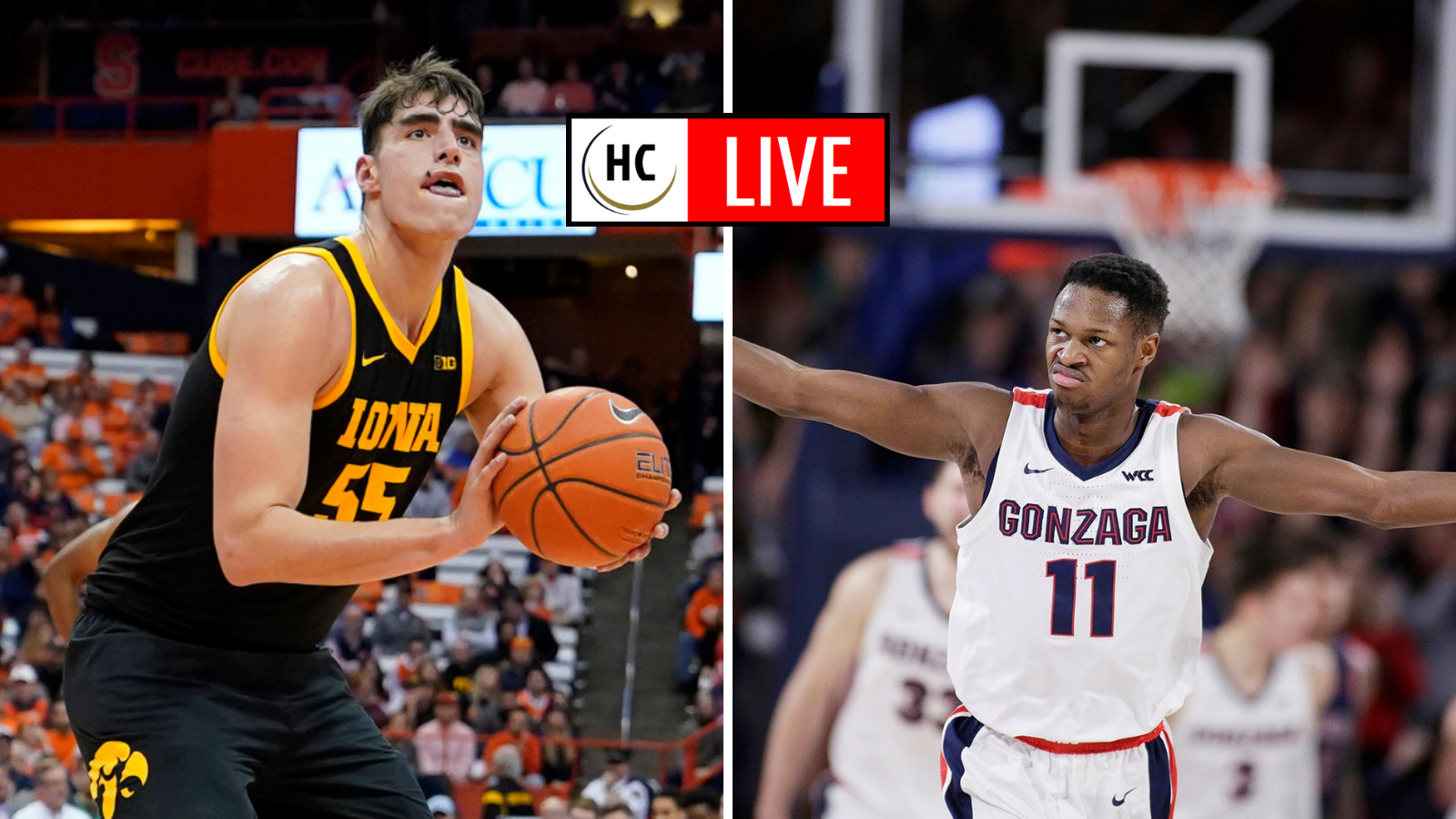 Welcome to a huge Saturday of college hoops! Things get going in a big way early with Iowa taking on Gonzaga in a battle of top 3 teams, alongside another top 25 matchup between Louisville and Wisconsin.

Elsewhere, don’t forget we have not one but two neutral-site showcases today with the CBS Sports Classic (North Carolina vs. Kentucky; UCLA vs. Ohio State) and the Crossroads Classic (Butler vs. Indiana; Purdue vs. Notre Dame). Furman-Winthrop, Chattanooga-UAB, and Colorado State-Saint Mary’s round out what will be an exciting day of college basketball. We’re keep track of all the action below.

2:00 a.m.: Congratulations to Manel Ayol for his first points in a Hawaii uniform. And with that, we *officially* say goodnight. See you next week!

1:05 a.m.: I’m on the West Coast, and I wanted to see how the actual last game of the night was going, so I checked in on Hawaii versus Hawaii-Hilo. I am very glad I did.

10:58 p.m.: The wheels are coming off for the Seminoles after another turnover and transition bucket for the Golden Knights. Yikes.

10:52 p.m.: Not sure how I feel about this “wet” shtick. Kinda uncomfortable right now. Then again, probably not as uncomfortable as Leonard Hamilton. His team is only down four now, though, thanks to this MJ Walker three:

10:29 p.m.: OK folks, we might have a late-night upset on our hands! UCF is up four points on Florida State at the under-12 break in the second half. I thought we were getting ready to shut things down, but just when I thought I was out…

10:07 p.m.: Speaking of ranked teams beating up on nearby mid-major foes:

10:05 p.m.: Florida State leads UCF by five points at the break. Here’s a look at the top performers from each side from ESPN:

9:51 p.m.: This sums up the Saint Mary’s-Colorado State game nicely. Perhaps too nicely.

9:17 p.m.: For the first time since 2009, Stanford has beaten Arizona! 78-75 Cardinal. Huge win for Jerod Haase’s club. This team looks like they could cause trouble in March… if they stay consistent.

9:13 p.m.: Ziaire Williams draws a charge from James Akinjo! Stanford will have a chance to put the game away.

9:08 p.m.: Arizona will have the ball with less than 20 seconds to play and they trail by a point. Oh man, the Pac 12 is back! (to being a mediocre league with some good games)

8:42 p.m.: Saint Mary’s up 33-17 on Colorado State at halftime, providing further evidence that the WCC is a stronger conference than the MWC this season.

8:30 p.m.: Arizona is staying close, but Stanford is still ahead against the Wildcats.

8:21 p.m.: Syracuse ends up walking over Buffalo in OT, and still, Jim Boeheim has concerns.

8:04 p.m.: Two HUGE defensive plays and a half-court shot that *just* missed! We’re going to OT in Syracuse. Hold on to your hats!

8:01 p.m.: IT’S GOING TO BE A CRAZY FINISH IN THE SYRACUSE-BUFFALO GAME OH MAN

8:00 p.m.: But neither is Syracuse… Quincy Guerrier with the strong finish for the three-point play:

7:55 p.m.: Some final numbers from the UCSB win over Pepperdine:

7:53 p.m.: All tied up now between Buffalo and Syracuse! It’s a heated battle with three minutes to play!

7:50 p.m.: UCSB is going to hold on to beat Pepperdine, as the Waves’ season continues its rocky trajectory. Just a matter of free throws, barring a massive, crazy series of events.

7:49 p.m.: Sometimes you need a little luck on your side. Buffalo stays on top against Syracuse, but the Orange are closing in.

7:14 p.m.: Pepperdine has looked at times like one of the best teams in California, but they’re struggling right now to put away their Golden State compatriots, UCSB. Gauchos hanging on to a four-point lead early in the second half.

7:04 p.m.: KC Ndefo is doing his part to keep St. Peter’s in front against Monmouth in this NEC battle. Ndefo was NEC Defensive Player of the Year last season.

6:50 p.m.: Oh, and I guess some people might care about this Ohio State-UCLA game. If you’re one of those weirdos, here’s an update for you. Zed Key has 11 and 6 inside for the Buckeyes.

6:42 p.m.: College basketball in 2020: A happy family — including one slightly more corrugated member — enjoying a game as safely as possible.

4:14 p.m.: Here at Heat Check we support many things, including 1) Safety) and, 2) Having announcers at the actual location of the game so they know what they’re talking about.

4:08 p.m.: Another nice win for Western Kentucky, taking down Alabama on the road behind Charles Bassey’s 27 points and 12 rebounds.

4:01 p.m.: Foul trouble already beginning to hurt Kentucky in what has been an already foul-heavy afternoon. UNC holds a two-possession lead.

3:51 p.m.: Nice one brewing here between Alabama and Western Kentucky.

3:10 p.m.: Strong first half by Purdue guard Sasha Stefanovic, who has connected on four of his five 3-point attempts today to give the Boilers a 12-point lead over Notre Dame.

3:03 p.m.: Kentucky up 38-34 at halftime, looking to secure what feels like a must-win over North Carolina in the CBS Classic.

2:39 p.m.: After a quick start by Kentucky, North Carolina has climbed back into it.

2:15 p.m.: Some housekeeping after Gonzaga’s win over Iowa:

1:39 p.m.: We have our first final score of the day as Indiana downs Butler 68-60 in the Crossroads Classic. Trayce Jackson-Davis led all scorers with 21 points and 8 rebounds.

1:18 p.m.: Well this morning has not lived up to expectations so far, I wouldn’t blame people for going to watch Ohio State lose a football game.

1:16 p.m.: The first half was all about Suggs and Kispert from deep, but the second half is Timme Time!

12:41 p.m.: Poor Auburn. They are playing one of their best games so far, and absolutely nobody cares.

12:13 p.m.: We have an early battle between Butler and Indiana, and a huge start for Wisconsin. The B1G is busy early, even if everyone is watching their football game.

11:55 a.m.: If arena size plays any factor in who wins this game, the Zags have a clear advantage.

11:30 a.m.: It is the busiest morning of the college basketball season, so far. As the great Arthur Fleck once said: