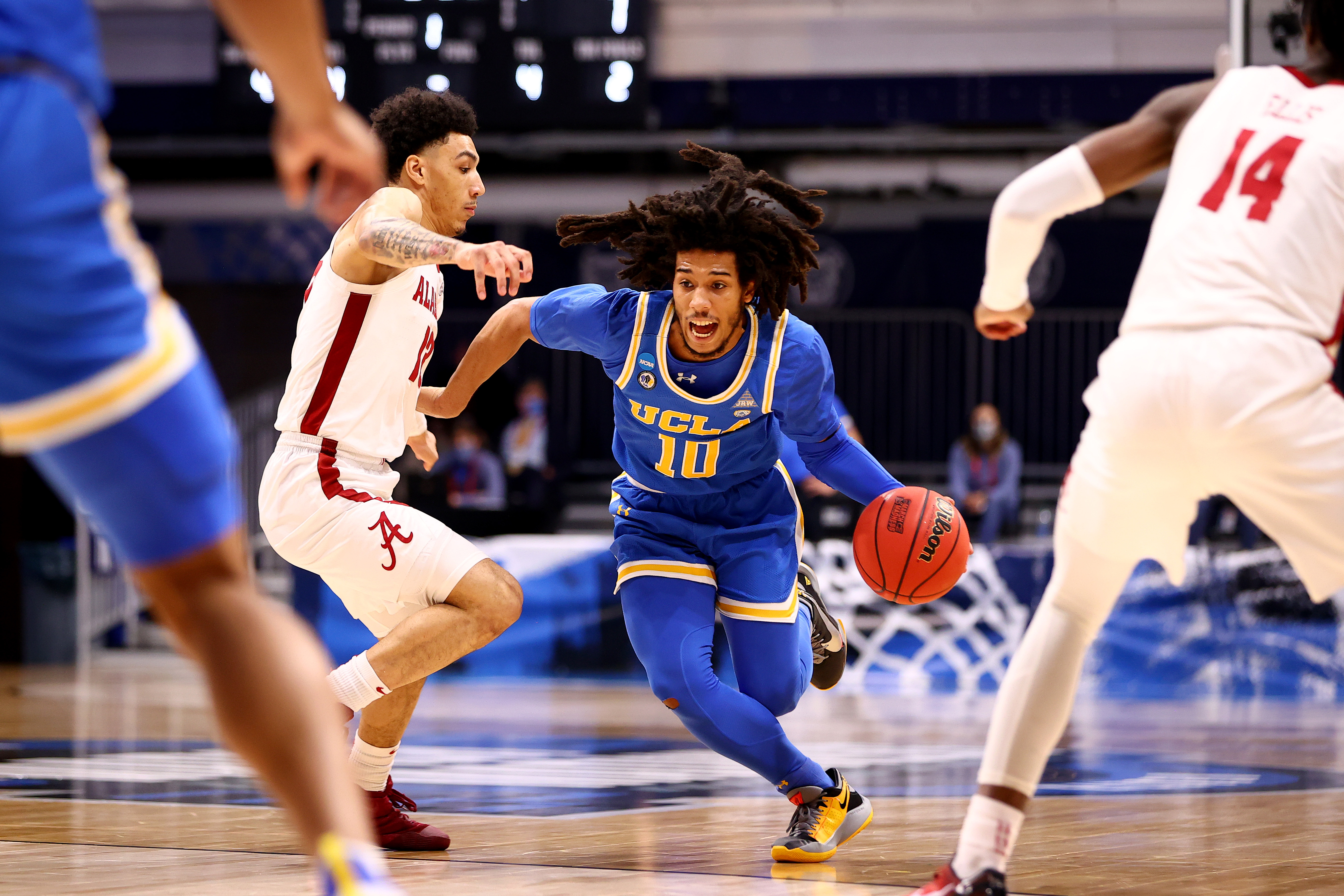 Was UCLA’s Final Four run a fluke or a preview of what’s to come during the 2021-22 season? The Bruins are poised to build off the momentum.

When formulating preseason rankings, I try not to let postseason runs from the previous year influence me too much. The randomness of March Madness — from injury luck to bad matchups to cold shooting — muddies projections more than it aids them. However, when it comes to this UCLA team, I’m breaking my own rules. They have all the makings of a legitimate national title contender.

That’s mainly because they’re not just banking on the momentum of last season’s Final Four berth. Instead, the Bruins will rely on the winning formula they discovered in the tournament.

Throughout the year, UCLA never had trouble scoring. Offensive production remained steady in the peaks and valleys of a COVID-afflicted season. The defense, on the other hand, vacillated in effort, intensity, and effectiveness. Take its four-game losing streak to end the regular season, for instance. UCLA surrendered over 1.1 points-per-possession in three of the four contests and got absolutely eviscerated at the rim.

But in their First Four contest versus Michigan State, the Bruins turned a corner. After halftime, UCLA stifled the Spartans, holding them to 38 percent from the field in the second half and in overtime. That performance started a trend for the rest of the tournament, as the team began strongarming opponents with Mick Cronin’s pack-line scheme. Even electric offenses like Alabama (.983 PPP) and Michigan (.834 PPP) turned mortal against them.

Moreover, the Bruins looked particularly disruptive against pick-and-roll during the postseason. They deterred their foes from the lane by icing ball screens, and they also switched 1 through 5 in certain lineups. With ace defender Jaime Jaquez returning, expect the defense to sustain its high level of play. The 6-7 junior embodies the junkyard dog mentality of Cronin teams of old; he gets his hands on blocks and steals and guards every position on the court. Note the play below where he clamps Alabama’s Jahvon Quinerly.

Lastly, the defense will only improve with the additions of Rutgers transfer Myles Johnson and five-star freshman Peyton Watson. Over the last two seasons, Johnson made his case as the top interior defender in the Big Ten. At 6-10, 255, the big man gives up zero space in the paint, eliminating opportunities for easy buckets. But he also shows excellent footwork and IQ in cutting off driving lanes and blowing up ball screens. In the clip below, he hedges on Michigan’s Mike Smith and then somehow recovers onto Hunter Dickinson. You won’t see many bigs make this play:

Watson will also erase shots around the basket. The 6-8 swingman optimizes his length to shine as a secondary rim protector — it’s no wonder Cronin loves him. In addition to his size, he displays terrific instincts, always threatening to intercept a pass and take off. Between him, Johnson and Jaquez, scoring on the Bruins will be about as pleasant as scrubbing a tile floor with a toothbrush.

On the other side of the ball, all traces of Cronin’s Neanderthalian offenses will continue to fade to black. Quite impressively, the coach has conjured up units that feature spacing and shot creation through two seasons in Westwood. With the return of its star-studded backcourt, UCLA figures to stay atop the league in offensive efficiency.

Tyger Campbell and Johnny Juzang lead the way as a topflight guard duo. Campbell commands the offense with unassailable poise and control, never letting defenses faze him. But most notably, the floor general operates out of ball screens at an elite level. Tyger’s passing reminds me of The Queen’s Gambit — similar to Beth Harmon envisioning her chess pieces five turns ahead, Campbell anticipates the movements of his teammates and passes them open. I’ve never seen someone make live-dribble skip passes look so routine:

Campbell plays alongside the perfect wingman in Juzang. The former Kentucky Wildcat left behind his freshman woes and burgeoned into a shot-making assassin in Year 2, most remarkably in the tournament. Now, whenever you see his name, images of him draining contested shots from all over the court come to mind. Who could forget him going nuclear in the ugly Michigan game? Or matching Gonzaga shot for shot in the national semifinal? Throughout the run, he played exceptionally well with the ball in his hands. But don’t ignore how well he moves without the rock. Juzang baits defenders into screens and swiftly relocates to open spots:

Senior Jules Bernard occupies the last starting spot on the wing, and he, too, provides an offensive punch. Bernard mainly thrives in catch-and-shoot opportunities, but he has some craftiness to his game when called to play on-ball.

But it’s not just the perimeter players who make the offense hum. The frontcourt also supplies plenty of firepower. Jaquez leaves an equally big impact on that end as he does on defense. The mustachioed forward tortures his challengers in the post but also fearlessly attacks off the bounce. And to top it all off, he’s a near-40 percent 3-point shooter! Regarding the other plays, Watson boasts some creation ability that not many collegiate players his size have, and Johnson will contribute with his dominance on the offensive glass. This unit offers a little bit of everything.

Beyond the starting five, UCLA showcases enviable depth at every position. Senior David Singleton is one of the best backup point guards in the country. Junior Jake Kyman can get hot from beyond the arc any given night. Sophomore guard Jaylen Clarke exhibits versatility as a defender. And senior Cody Riley brings reliable low-post scoring and ferocious rebounding.

Consequently, the more I look at this roster, the less I think the postseason run was a flash in the pan. After catching a glimpse of the mountaintop, this team should lack no motivation to scale the summit. UCLA possesses a legitimate shot to reach back-to-back Final Fours — a feat no school has done since North Carolina in 2016 and 2017.

Weaknesses: Inconsistent defense that needs to prove it can sustain the high level from the NCAAT