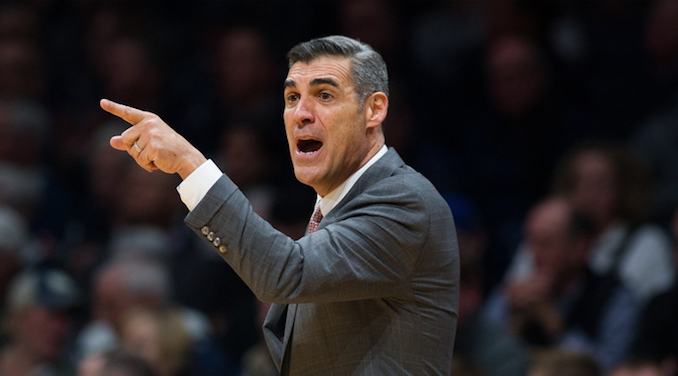 With the scheduled start of the 2020-21 college basketball season over five months away, we are just now seeing rosters start to finalize. There are still a lot of transfers and players testing the NBA Draft, but our view of next year’s pecking order has begun to take shape.

Here are 50 words on every team in my Top 25 to start June. Please remember that with so many players still making their NBA decisions, there is a bit of guesswork that has gone into these rankings.

Losing the Wessons could potentially be the demise of Chris Holtmann’s Buckeyes, but bringing in Seth Towns will certainly aid in the recovery. I would not be surprised, however, if it is Justice Sueing Jr. who emerges as the teams star. Don’t expect Ohio State to struggle much this year.

UConn returns to the Big East and national headlines all in the same season. The Huskies were expected to take time to gain momentum under Dan Hurley, and this is finally the year. The additions of Javonte Brown-Ferguson and Adama Sanogo also give UConn the toughest frontcourt in the conference.

I am not sure any coach builds a roster deep enough to sustain losses as well as Leonard Hamilton. Normally the loss of Trent Forrest, Devin Vassell and Patrick Williams would sink a program, but Hamilton can call on Scottie Barnes, MJ Walker and Malik Osborne to carry the load.

Even if Mac McClung receives a waiver, Texas Tech does not have nearly as talented a roster as the top teams in their conference. They lose a potential lottery pick in Jahmi’us Ramsey and McClung is not a certain replacement for his production. However, Chris Beard’s coaching makes anything possible.

It’s finally happened, the Razorbacks may finally be as good as Arkansas fans think they are. Mason Jones may be gone, but Isaiah Joe could eventually return, which would give Eric Musselman’s team a much needed boost. I am personally excited to watch Connor Vanover play for a talented team.

Are we still stuck between Rutgers 2019-20 season being a fluke or signs of things to come? Well we shouldn’t be. The Scarlett Knights have most of their scoring back, including Ron Harper Jr. and Geo Baker, and their defense won’t suddenly regress. This should end their NCAA Tournament drought.

This could change before the end of the summer, but at this point it seems likely that Tyrell Terry takes his talent to the professional ranks. Even without Terry, there is a ton of talent on this roster, including Top 10 recruit Ziaire Williams. This is Jared Haase’s final test.

The Ducks may not have the talent that Stanford does, but Dana Altman is perhaps the best coach in the Pac-12. Losing Payton Pritchard will be a huge hit, but the team’s sophomore class showed a ton of promise last season.  This will be a team effort for the Ducks.

Rounding out this trio of Pac-12 teams, the UCLA Bruins went through a huge metamorphosis last season. It appears that Mick Cronin has the Bruins on the right track, and they return nearly their entire rotation from last season. If Chris Smith withdraws from the draft, they will be scary.

Don’t worry, I did drop the Cougars after the Fabian White news. However, even without White, I am confident the Cougars will be the best team in the AAC. Returning his top two scorers in Caleb Mills and Quentin Grimes, head coach Kelvin Sampson will once again prove his worth.

Assuming Yves Pons returns, Head Coach Rick Barnes’ Volunteer team should be the biggest threat to Kentucky in the SEC. Keon Johnson and Jaden Springer will get most of the attention as additions, but Oregon transfer Victor Bailey is a solid shooter that could make a difference off the bench.

Pending the return of Remy Martin, Arizona State should have the best roster in the Pac-12 next year. Whether the Sun Devils can play a complete season of elite basketball is another matter altogether. It might take Joshua Christopher a few weeks to find his footing, but once he does…

I love this North Carolina roster, perhaps more than any other ACC team. However, last season’s dumpster fire gives me pause moving forward. The Tar Heels are too talented to keep out of the Top 20, but I hesitate to move them into the Top 10. Can Roy still win?

While the loss of Ty-Shon Alexander is huge, the talent left for Creighton should give them an edge over Big East foes with similarly big losses. Marcus Zegarowski is one of the best perimeter shooters in the country and will now be the primary scoring option for the Blue Jays.

No big men? No problem. While the Wildcats may not have the size on the interior that their fans have become accustom to, their talent on the wings in undeniable. Keeping Terrence Clarke from making the immediate leap to the G-League program is a sign of hope for Kentucky fans.

No team lost more in one player than Michigan State, with Cassius Winston graduating. Rocket Watts will have a huge role to fill this season but he is not left with an empty cupboard. We know Joey Hauser is finally eligible, which puts the focus on Josh Langford’s possible return.

Returning a fantastic core from a team that didn’t lose a single home game until February, Bob Huggins’ Mountaineers earns a Top 10 spot. If the bigs continue their dominance on the boards, and they get more consistent shooting, West Virginia should be a big challenger in the Big XII.

While I still do not trust Greg Gard, the returning core for Wisconsin should have them in the Top 10 and competing for a second straight Big Ten Championship. With Brad Davison, D’Mitrik Trice, Nate Reuvers, Aleem Ford and Micah Potter all entering their senior year, Gard has to deliver.

Two words: Luka Garza. If the Hawkeyes’ big man returns for his senior season, there shouldn’t be any doubt that they have the highest floor in college basketball. Returning every starter and having a healthy(?) Jordan Bohanon will make Iowa one of the most complete teams to start the season.

If Iowa has college basketball’s highest floor, Duke certainly has one of the highest ceilings. Despite one of the biggest roster turnovers in the country, the Blue Devil’s top-three recruiting class brings in a ton of talent. If they can find a consistent leader, the Blue Devils will be dangerous.

Winning ugly works if you actually win, and Virginia will certainly win this year. With Sam Hauser and Jabri Abdur-Rahim entering the fray, the Cavaliers should see a sharp uptick in their offensive production. Continued buy-in on the defensive front will make the Hoos the toughest win in the ACC.

Sure, Kansas loses Devon Dotson, my 2019-20 Player of the Year, and Udoka Azabuike, but there is plenty of talent left to keep the Jayhawks in the top five. Kansas is poised to remain a top defense in the country, and the offense isn’t likely to be a death sentence.

After a pretty sizeable leap from the number four team, Villanova should be the heavy favorite to win the Big East. Even with Saddiq Bey projected as a first round pick, the Wildcats return plenty of talent. Jay Wright has a full cupboard and that makes Villanova a scary team.

Replacing Freddie Gillespie will be difficult, but the Baylor Bears have experience and depth on their side. MaCio Teague and Jared Butler still haven’t made their draft withdrawal decisions, but a return to Waco seems imminent. It would be hard to imagine the Bears falling flat if they come back.

No team benefits more from the lack of a combine than the Gonzaga Bulldogs. If Corey Kispert, Filip Petrusev, and Joel Ayayi all return to join Drew Timme, Oumar Ballo, Aaron Cooke, Anton Watson and the Tricky Trio; the Zags will have the deepest, most talented roster in the country.

Connor Hope is a college basketball writer for HeatCheckCBB.com. His content has been featured by Bleacher Report and FanSided, among other publications. Hope is also a current Rockin’ 25 voter.