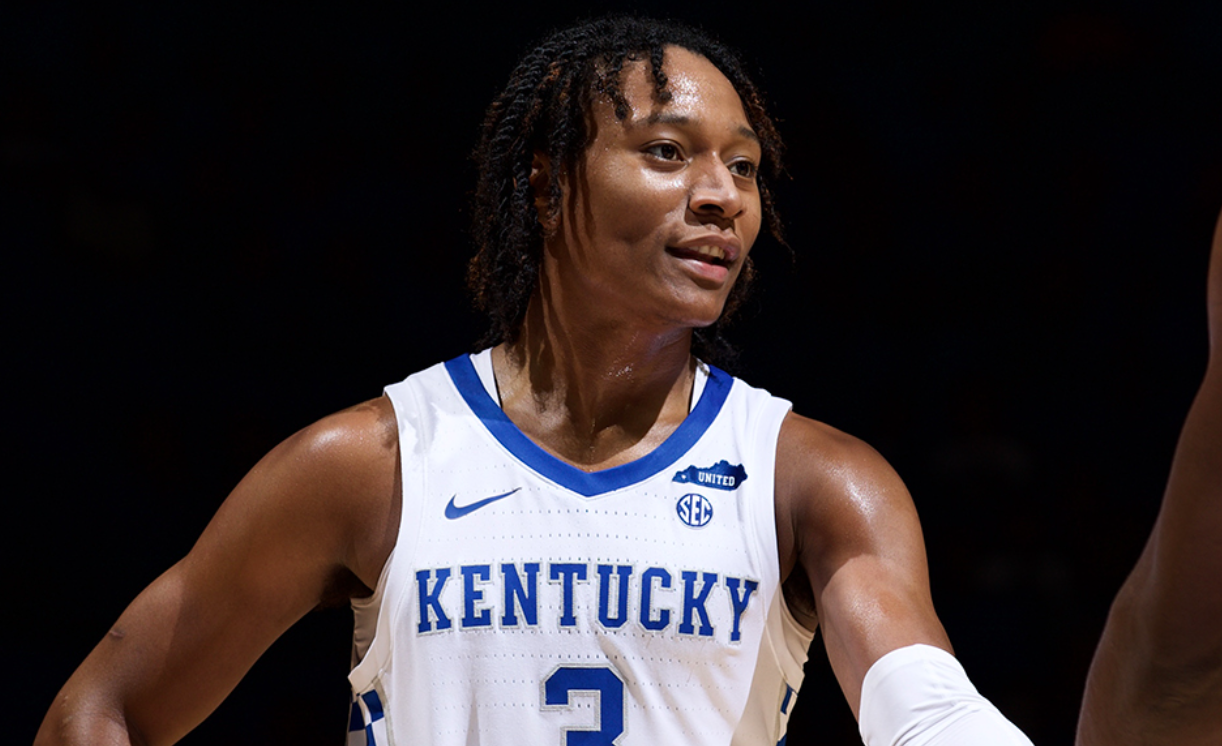 Freshman TyTy Washington is one of the nation’s elite guards, and he’s helping guide Kentucky basketball to the national title conversation.

Kentucky basketball is in the midst of an exciting season. The Wildcats entered the 2021-22 campaign with high expectations due to their impressive mix of incoming talent. Head coach John Calipari not only secured his regular high-ranking recruiting class but also added a chunk of elite transfers to the mix. As a result, Kentucky ranked 10th in the AP preseason poll despite missing the NCAA Tournament with a 9-16 record a year ago.

And while the ‘Cats have been ranked every week this season, they did not put together an elite nonconference resume. Kentucky went just 1-2 against the KenPom top 100 and slipped down to a season-low No. 21 on the analytics website before the holidays. Since then, they have rattled off wins in seven of their last eight games, with the only defeat coming on the road at LSU by five.

Kentucky has climbed to No. 5 on KenPom and most recently dominated Tennessee by 28 points.

West Virginia transfer big man Oscar Tshiebwe has been at the forefront of Kentucky’s successes this season as a National Player of the Year contender. He leads the team in scoring and the nation in rebounding. Yet, when March comes around, college basketball is often a “guard’s game.” Does Kentucky have that go-to, three-level scoring threat who can take over down the stretch?

Scoring efficiency comes at all levels

The tale of the tape for TyTy Washington begins with his scoring ability. And considering he set the Kentucky record for assists in a game this season, that speaks volumes to his dynamic bucket-getting. The 6-3 guard might not boast the electric quickness of a John Wall or the knockdown free-throw shooting of Tyler Herro, but he is a jack-of-all-trades as a scoring threat.

Kentucky head coach John Calipari has featured many elite one-and-done guards over the years. While the term “three-level scorer” is often misplaced and overused, Washington fits it to a tee. He is more efficient across the board than just about any other guard that has graced the court in Lexington under Coach Cal:

Washington’s ability to score at all three levels, particularly in the mid-range, makes him so hard to defend. He might not explode to the hoop like other top-rated guards, but he is a self-creator with a deep bag of tricks in the pick-and-roll. He analyzes the game at a high level and takes what the defense gives him.

Washington is a mid-range assassin

While the mid-range might be a dying art, those who do it best are well-known for it. Chris Paul, Khris Middleton, and DeMar DeRozan – among others – are such dynamic offensive threats in the NBA due to their superb ability in the mid-range. They make an inefficient shot that defenses are willing to surrender efficient.

Washington is shooting 53.4 percent on “long twos” this season (103 attempts), a mark that ranks second among all players in college basketball with more than 70 attempts. Only Winthrop’s DJ Burns (49-for-88; 55.7 percent) has connected at a higher rate. TyTy Washington is one of only four players nationwide with more than 55 made “long twos.”

Washington is very patient as a pick-and-roll ball-handler and gets to his spots as a result. He uses deceleration remarkably well in fast-breaks to get to his floater as well. His mix of dribble pull-ups and floaters keeps defenders on their toes:

If defenses go over screens, he can dominate in the mid-range or use his playmaking ability to create finishes for bigs like Tshiebwe. If defenses go under screens, he can counter that with a deadly perimeter jumper. While lethal as an off-the-dribble threat, he also does an excellent job moving without the ball — particularly relocating to corners — to get open beyond the arc.

He also finishes nicely, though that is the weakest part of his offensive game due to lack of volume. Fewer than one-fifth of Washington’s total field-goal attempts are at the rim, and his .138 free-throw rate is relatively low. However, when he does get inside, he is finishing at an impressive rate (62.2 percent) and is acrobatic in the air.

Washington’s Synergy numbers are eye-popping as a scorer:

Passing: The easy read is often the correct read

Washington is not just a defensive nightmare in the pick-and-roll because of his scoring ability. He is a high-level processor with the ball in his hands, including making the right reads as a playmaker. He will not wow too often with crazy or flashy passes, but he goes about his business at his pace and hits shooters and finishers in the right spots.

Washington makes the “easy” passes more often than not, which is a compliment. He does not try to do too much as a passer and understands the value of a properly placed pass. One of the more underrated tools in his bag is leading a cutter or roll-man. By placing the ball in front of them and hitting them in stride, defenses cannot catch up in time.

The 6-3 guard made headlines when he broke John Wall’s record for single-game assists at Kentucky. He dished out 17 dimes in the Wildcats’ win over Georgia. He pulled off this feat in just his first game as UK’s full-time point guard with Sahvir Wheeler out. Here were all 17 assists — as well as his buckets — from that victory:

Washington makes the “right” play on so many of these passes. He draws defenders and dumps off, quickly advances the ball in transition with the pass rather than the dribble, leads bigs on the rolls, and hits snipers in their shooting pockets. While not many of the assists elicit “wow” reactions, there is no denying the effectiveness. Georgia’s poor defense buoyed his total assist numbers from that game, but it was impressive nonetheless.

Playmaking by the numbers

TyTy Washington is boasting a 23.7 percent assist rate that ranks 238th in the nation. Wheeler missing two games opened the door for Washington to handle the ball more. He has excelled with the added responsibility and dished five assists in Wheeler’s return-to-action game as well.

Washington’s innate ability in the pick-and-roll is evident on film, and the analytics back up the eye test tremendously in this facet. There aren’t many guards in the country with a better pick-and-roll profile:

He is also displaying a 2.7 assist-to-turnover ratio for the season.

How far can Washington take Kentucky?

Washington is not Kentucky’s best player, nor is he the most valuable. Both of those labels apply to Tshiebwe. However, the chemistry these two have built over the first 17 games of the season sets them up for a great deal of success moving forward. They are an impressive pick-and-roll duo with Tshiebwe’s superb screen-setting and rolling ability combined with Washington’s playmaking and deadly shooting.

It also helps that both are quality free-throw shooters at over 70 percent. With that in mind, Kentucky’s late-game strategy should be pretty straightforward. Washington is a dynamic, creating guard who can knock down the big shots while Tshiebwe is there to fly above the rim for finishes (or collect offensive rebounds). The Wildcats will go as far as these two take them.

The SEC is elite, and Kentucky is among the league’s regular-season title contenders. The Wildcats hold a 14-3 (4-1 SEC) record and have been playing better basketball of late. TyTy Washington is a significant reason for this as his increased numbers have correlated to better team performances:

Washington’s effectiveness as a scorer and creator makes him one of the most dangerous guards in the country. He will have the ball in his hands a lot in March, and his decision-making could be the deciding factor in determining Kentucky’s ceiling.

Washington is destined to be a first-round NBA Draft pick, leaving two months to put his stamp on Kentucky basketball. Postseason expectations are rising for the Wildcats as they continue to improve, and Washington could help bring a national title to Lexington for the first time since 2012. With his all-around ability — as well as chemistry with Tshiebwe and sniper Kellan Grady — that is a real possibility.