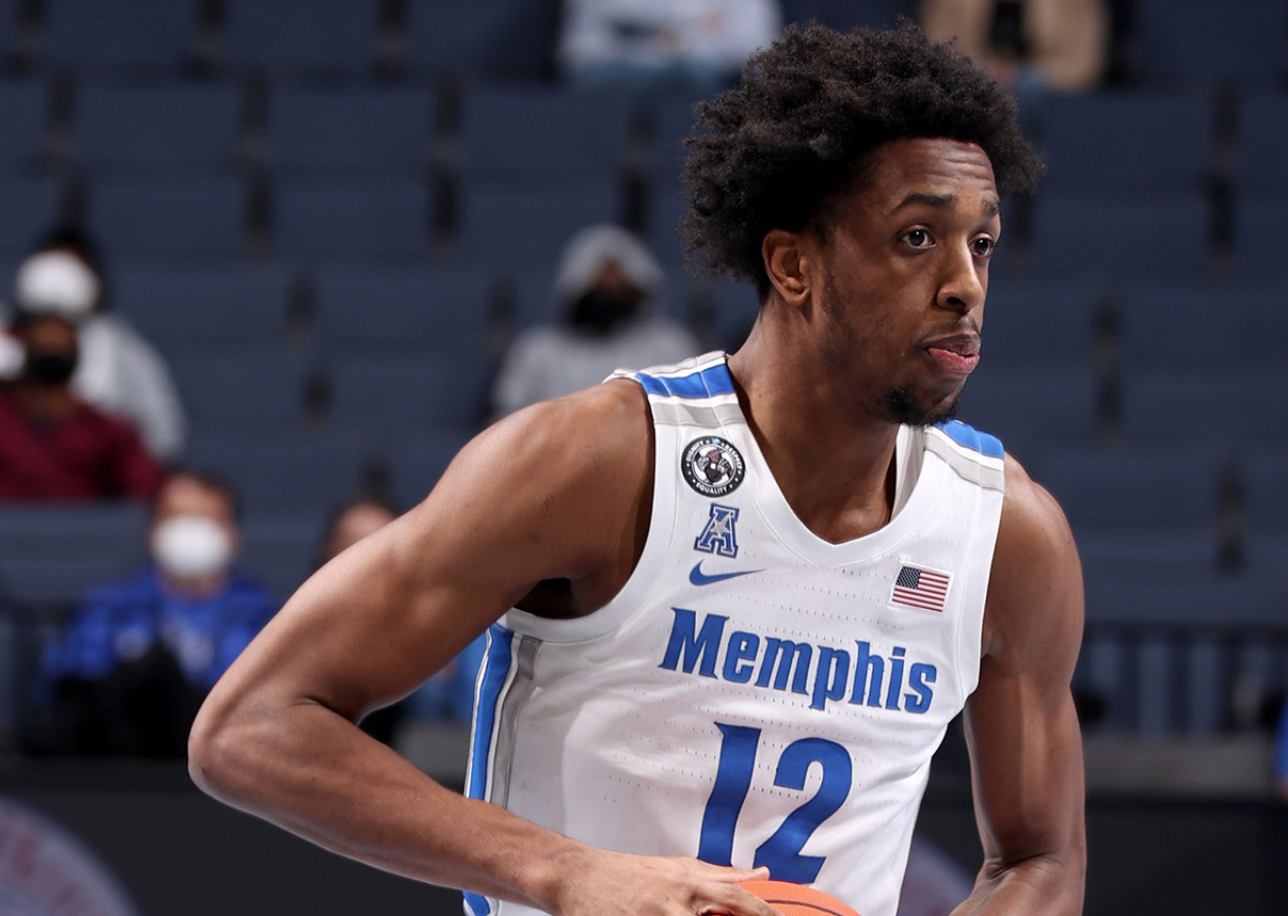 Memphis Basketball: Why DeAndre Williams will be the Tigers’ most important player

Why DeAndre Williams — not Jalen Duren or Emoni Bates — will be Memphis basketball’s most important player.

First, Jalen Duren classified up to 2021 and committed to Memphis basketball. Within weeks, Penny Hardaway went public with the hire of former NBA All-Star Rasheed Wallace to his staff. Then, just this past week, Emoni Bates committed to Memphis as the final piece of the 2021-22 roster. All of this came after an offseason where the Tigers hired basketball Hall of Famer Larry Brown on staff as associate head coach.

Coming off a season where the Tigers finished 20-8 and won an NIT Championship, Memphis has stayed in the news the entire offseason with incredibly positive bylines. However, the biggest story — and biggest factor on the Memphis team — may not be any of these additions. The most important piece in the program may just be returning junior DeAndre Williams.

Heat Check CBB takes a look at Williams, and why he should not be the forgotten piece for Memphis basketball this season.

—Rankings: Memphis climbs to No. 13
—Breaking down impact of Bates, Duren
—Subscribe to Heat Check CBB Premium for exclusive content!

Who is DeAndre Williams?

DeAndre Williams took a circuitous route to Memphis. Williams attended Houston (Texas) Klein Forest High and then transferred to Sports Association of Texas for Christian Homeschoolers – SATCH – for his final year. SATCH did their classes through an online-only program called Orion High School. While Williams did the work and passed all of his classes, the school was not NCAA approved.

This forced Williams to take an extra year at Oklahoma City (Okla.) Nation Wide Academy in order to finish all of his required classes. The Rivals150 3-star picked up offers from Baylor, Houston, SMU, Oklahoma State and Western Kentucky while in his school. However, it was Evansville and head coach Walter McCarty that stuck with Williams through the extra year.

While Williams was admitted to Evansville and put on scholarship, the NCAA denied Williams’ waiver request and he was deemed a non-qualifier for his first year. The NCAA, however, did grant Willams a waiver that enabled him to practice and be around the team for the year.

Immediately, Williams made his presence known during his sophomore season. In his first game he scored 26 points and finished with nine rebounds, three assists and two steals. Williams was in rarified company throughout his entire first season. He was one of only three players in Div. 1 basketball who played in 17 or more games while averaging more than 15 points, 6.5 rebounds and shooting 44 percent or better from deep.

Williams was efficient in his first year as his advanced analytics popped as well. Williams joined NBA Draft picks Luka Garza, Obi Toppin and Vernon Carey among the six players nationally who finished with a 31 or better Player Efficiency Rating and a Box Plus/Minus 7.5 or greater.

The 6-9, 190-pound Williams showcased why so many high-major schools were on him in high school as he finished fifth in scoring, seventh in rebounding, and third in three-point shooting in the Missouri Valley Conference. Looking ahead, Evansville’s McCarty told Pat Williams of the Courier and Press, “The best thing is, and he doesn’t want to believe this, but if he can just concentrate on being the best defender and offensive rebounder and do those two things like I believe he can then he’ll be a pro just because of that.”

After his redshirt freshman year at Evansville, McCarty was fired. Williams entered the transfer portal with dozens of opportunities. He chose Memphis over a final group that included Kentucky, Baylor and Arkansas.

Last season, his first at Memphis, Williams’ defensive numbers went through the roof. He joined NBA draftee Neemias Queta as the only players in Div. 1 who finished with a Defensive Rating below 84 and Defensive Box Plus/Minus over six. It helps that Williams led the American Athletic Conference in steals at 2.2.&nbsp;

A coach on a competing American Athletic Conference team told Heat Check CBB, “DeAndre Williams is the biggest x-factor for Memphis because he makes plays that you cannot scout: offensive rebounds, back door cuts, blocked shots, transition rim runs. His energy is contagious.”

In his first year at Memphis, Williams was one of three players nationally who grabbed more than 5.5 rebounds, 3 assists, and shot over 44 percent from three. He joined first-round draft pick Quentin Grimes as the only two players in the AAC with a Player Efficiency Rating over 22 and a Box Plus/Minus over 9.5.

Why Williams will be Memphis basketball’ most valuable player

Memphis brings back three of its top six scorers this season as Landers Nolley (13.1 points per game), Lester Quinones (9.5) joins Williams (11.7) on the 2021-22 roster. The Tigers also bring in Miami (Fla.) transfer Earl Timberlake and Oregon transfer Chandler Lawson also becomes eligible. However, the big talk about Memphis has been the additions of Rivals150 top five prospects in Bates and Duren.

Duren will step in the center position and he won’t have much competition there. It has been made public that the pitch to Bates was for him to play the point guard position. While Bates has had the ball in his hands for a lot of his career, the questions arise from his ability to make reads and see the game. Having a secondary ball handler and initiator like Williams on the floor could provide a safety blanket for a young Bates. Williams is the only returning player in the AAC who averaged more than three assists with a Usage Percentage over 23.5.

As a team, Memphis shot 38-percent from beyond the arc last season. Williams was also the team’s leading three-point shooter at 45.5-percent. In fact, Williams led the American Athletic Conference in three-point shooting percentage for players with more than 30 attempts.

Memphis is going to have depth but there is also some youth. Williams’ ability to shoot, pass and defend will get him a lot of minutes on the floor. His style of play will bring a lot of consistency to a team that could struggle with offensive efficiency. He is the backbone of what this team will do defensively and as he has shown in his career, he can take on the lead scoring role or play off his teammates as a cutter and passer.

This is a very talented starting five, but the question will remain how can Bates tote the load at point guard. Having Williams certainly should help some, also you have Duren who is a good passer who can provide unique actions. A steady hand backing up Bates in Alex Lomax will be helpful as well. Having Earl Timberlake come off the bench will probably be a good thing for his development as he was thrust into heavy minutes. Timberblake was not ready for workload last year as he finished with a 91 Offensive Rating, a -0.7 Offensive Box Plus/Minus, and shot 28.6 percent from deep last year. Lawson should be able to come off the bench with good minutes as well.

Nolley should be the team’s leading scorer again and Quinones should again fill in the gaps with shot making, positional size and good defense. In conference play, Memphis basketball led the league in assists per game, and if the Tigers can keep the ball from sticking on the floor this year, the talent and the depth could create some special things.