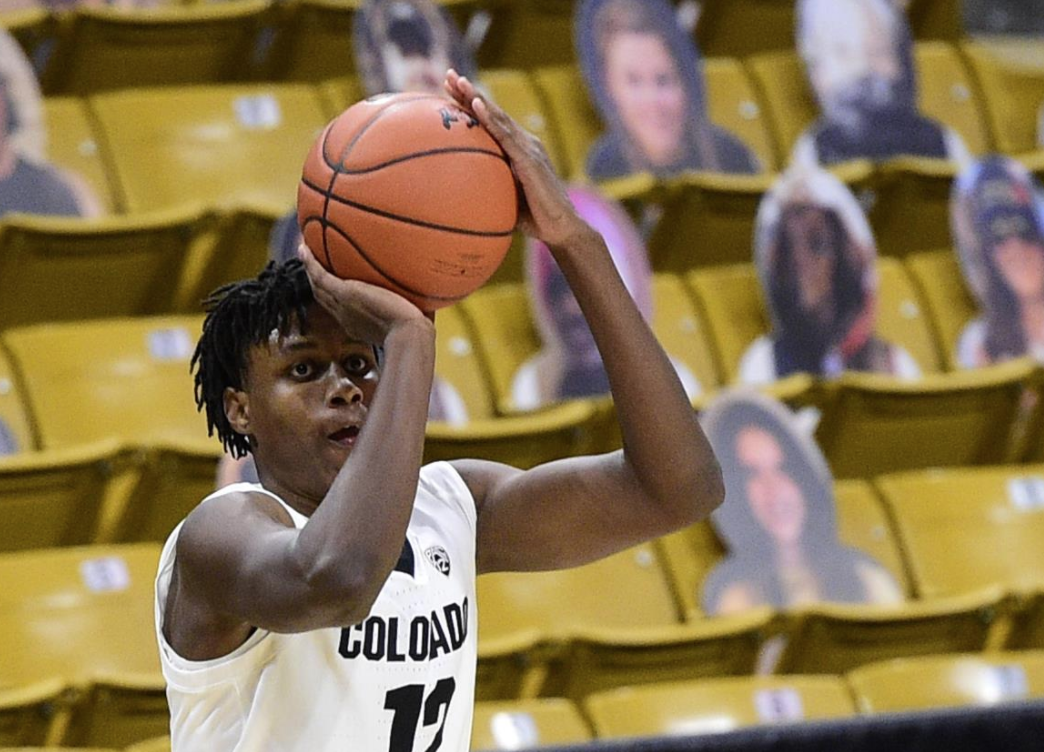 Shaw’s Sleepers: How Colorado’s Jabari Walker could be a first-round NBA Draft pick

Analyzing Colorado’s Jabari Walker and how he could become a star and potential NBA Draft pick as a sophomore.

The NCAA Tournament was a mixed bag for Colorado’s Jabari Walker.

The 6-8 freshman came out the gates swinging. In an opening round win over Georgetown, he finished with a 24-point performance by shooting 9-of-10 from the field and 5-of-5 from beyond the arc.

It was the type of performance that could propel a freshman from obscurity to the first round. Instead, Walker followed up his first-round performance with a zero-point, four-rebound appearance in the loss to Florida State. This leaves a mixed bag for onlookers, but it is something to build upon.

Let’s take a look at Walker’s season and dive into his background to see what we can project for Year 2.

Jabari Walker is the son of 10-year NBA veteran Samaki Walker. It’s worth paying attention to the developmental curves of the kids of former pros. While some may take a little longer to develop than their peers, many of them will have a great base of skills to build upon. Walker is no different, as the rising sophomore grew from 6-5 to 6-8 as a senior in high school.

That growth did not go unnoticed as Walker, out of Phoenix (Ariz.) AZ Compass, ended his senior season ranked as the No. 147 player in the 2020 Rivals150. He chose Colorado over a handful of offers including California, Duquesne, East Carolina, UMass and others. While Walker was not an unknown player, he was lightly recruited and by no means thought of as a possible NBA prospect.

For his freshman season, Walker played in 26 games and accumulated zero starts. The 6-8, 200-pound forward averaged 7.6 points and 4.3 rebounds in 14.2 minutes per game. These numbers may seem rather pedestrian, but then you start to dig a little and find the significance of Walker’s Year 1.

Last season, Walker was the only freshman who shot over 50 percent from three with more than 40 attempts while averaging more than four rebounds per game. He was one of only two players in Div. 1 last season — and one of five freshmen over the past 20 years — to have accomplished this statistical feat. That may shed a little more light on the intrigue.

Walker’s 26.8 Player Efficiency Rating was fourth last season for freshmen who played at least 365 minutes, a list that No. 3 pick Evan Mobley led. When you add in Walker’s 8.4 Box Plus/Minus last season, he was one of six freshmen in the Pac-12 over the past decade to finish with these type numbers. The other five were all first round draft picks, and four of them top five picks: Markelle Fultz, TJ Leaf, DeAndre Ayton, Onyeka Okongwu and Evan Mobley.

Let’s look at how Walker projects on the defensive side of the ball. His raw numbers were 0.5 steals and 0.5 blocks per game, which stretches out to 1.3 steals and 1.3 blocks per 40 minutes. As far as advanced stats, Walker’s 91.3 Defensive Rating, 3.1 Defensive Box Plus/Minus and 0.9 Defensive Win Shares were comparable to only six other freshmen, including first-round draft picks Evan Mobley, Jalen Suggs, and Isaiah Jackson.

What do we take from all this? The main point is that Walker can really shoot the ball and he also has defensive upside. His freshmen shooting spits of .52/.52/.77 has only been accomplished by four other freshmen in the past 30 years. While it is improbable he will maintain these numbers, it shows that his shooting is a special trait, and one he can count on.

How Colorado will build with Walker

Coming into this season, Colorado will lose five of its top seven scorers off a team that went 27-9 overall, finished 14-6 (3rd) in the Pac-12, and made it to the second round of the NCAA Tournament. There will be ample opportunity for Walker to step into playing time, and more importantly, a featured role.

His shooting, court vision and playmaking abilities should be placed in the “needs improvement” category. Walker dished out 13 assists to 28 turnovers last season, and while his handle is not tragic, it is rather rudimentary for a wing. He moves well off the ball, cuts hard and with purpose and does find himself some easy looks throughout the game. He can also get into the paint off the bounce, especially when catching the ball off movement. However, you will rarely see a change of direction or a pull up off the bounce and you will almost never see a dump off or a kick out. This area can be developed, especially as Walker is still growing into his 6-8 frame.

Walker carries a naturally lengthy frame that is still filling out. While he does not have elite vertical pop, he is a good athlete and the thought is more explosion will come as his body and frame naturally get stronger. He is a good team defender, as he understands angles and uses his length to his advantage.

Based on his physical profile and pure shooting numbers alone, Walker will pique the interest of NBA front offices. This season will go a long way in answering some questions about his game and projection moving forward. However, looking at his physical profile, his genetic makeup, and the advanced analytics he provided in Year 1, Walker has every opportunity to earn the trust of front offices as a first rounder.