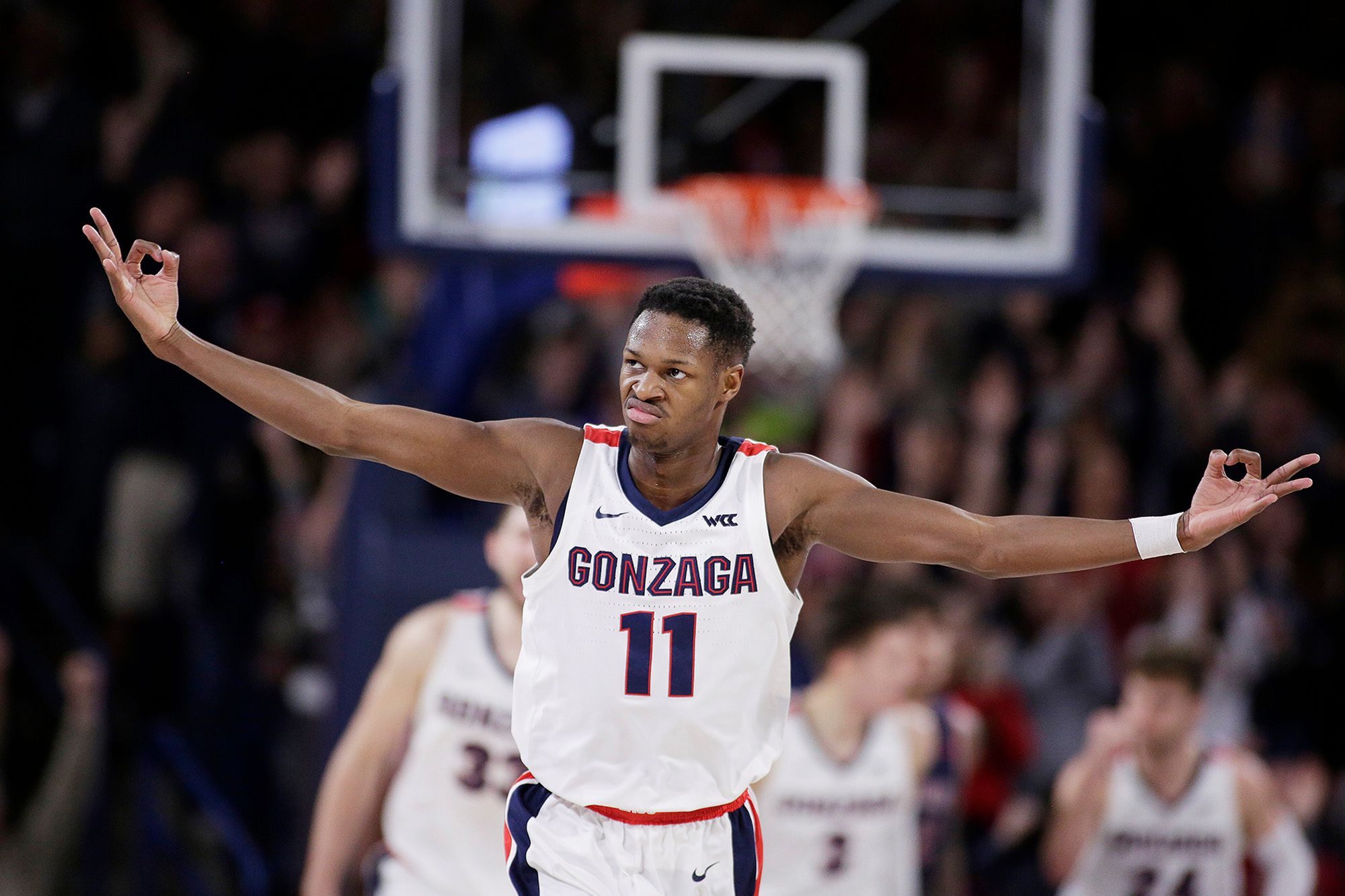 The nature of NCAA basketball lends itself to having a litany of breakout players every season. Due to the insane amount of roster turnover we’ve become so accustomed to and, well, athletes only have four years of eligibility, players are constantly being given new roles and new opportunities to show their stuff.

Prized freshmen and returning stars are always the storyline in the weeks and months leading up to the start of a new season, yet those rarely have the kind of impact on the national stage we expect. Instead, it’s those unexpected breakout players that dominate the conversation.

Last season was a perfect example of that as the two leaders in the National Player of the Year race — Dayton’s Obi Toppin and Iowa’s Luka Garza were not on anyone’s radar in the preseason. Toppin was leading the Flyers to what would have likely been a No. 1 seed in the NCAA Tournament and another breakout player, Malachi Flynn, was doing the same for San Diego State. Baylor, another projected No. 1 seed, seemed to have a roster full of breakout players.

Anyways, you get the picture. I know everyone is excited to see Cade Cunningham suit up for Oklahoma State (myself included) and see what Garza will do in his senior season for the Hawkeyes. But keep an eye on these five players as well, as they’re in line to make unexpectedly huge impacts in the coming season.

Joel Ayayi is already coming off a bit of a breakout season after going from benchwarmer to starter for Gonzaga, but the 6-5, 180-pounder is in line to take another big step forward and become a national star.

Ayayi showcased flashes of a full repertoire as a sophomore. He excels finishing around the rim thanks to his quickness and length, and also has a quality floater that makes him an effective slasher even when going up against quality rim protectors. His three-point shooting improved (34.3 percent) and his defense was stout, using his height and longer wingspan to really impact opposing guards. And, while Ayayi wasn’t the Zags’ full-time primary ball-handler, he showed a knack for playmaking and taking care of the ball (4th in WCC in assist/turnover ratio).

But everything was only in flashes for the Frenchman. A stellar 15-point, six-rebound, seven-assist performance at Arizona was followed a few games later with seven points against Eastern Washington. There were 13 games in which he scored fewer than 10 points and only two in which he reached the 20-point mark.

Part of that is a byproduct of it being his first year seeing significant playing time, and part of it is because of Gonzaga’s balanced offensive attack (seven players averaged at least 9.8 points per game). Ayayi should naturally become more consistent in his second season seeing significant playing time even though the Bulldogs should have an extremely balanced attack again (I think they’re the nation’s best team for a reason).

That said, perhaps the biggest reason to love Ayayi is that he always showed up in big games. His averages leapt to 11.3 ppg, 6.7 rpg (we haven’t even talked about how good of a rebounder he is for a guard!), and 5.0 apg in Gonzaga’s six non-conference games against power conference opponents, and he was named Most Outstanding Player of the WCC Tournament for his play.

Some NBA scouts were high on Ayayi due to those star flashes he showed but wanted to see him get stronger and be more consistently dominant. He’s back for his junior season as a result, and Gonzaga will reap the benefits.

I know everyone expects a huge season from Drew Timme following Filip Petrusev’s departure (I do, too) and from five-star freshman Jalen Suggs, but don’t be surprised if Ayayi is the leader of this talented group come March.

Let’s start this off by saying West Virginia needs Miles McBride to be one of their best players in the upcoming season. They’re a team with excellent frontcourt production thanks to Oscar Tshiebwe and Derek Culver, but their backcourt has been much more spottier. Last year’s late-season collapse coincided with a bad stretch from their backcourt, and McBride is the most talented and most impactful guard.

The Mountaineers were 12-4 in games where he scored at least 10 points compared to 9-6 when he did not.

West Virginia went 9-0 when he shot at least 43 percent from the field – regardless of how many points he scored – compared to 12-10 when he didn’t.

The biggest thing limiting him was inconsistency with playing time, how he was used, and the natural up-and-downs that come with being a freshman. There won’t be those fluctuations with playing time as he’s cemented himself as WVU’s premier guard and, as a sophomore, should eliminate some of those freshman mistakes.

I expect his usage to even out, too. He wasn’t often used as the primary ball-handler and didn’t have many plays drawn up for him since he was a freshman coming off the bench, forcing him to create most of his offense or find it in transition. McBride is good in those areas but has also shown effectiveness operating the pick-and-roll and in spot-up situations.

Expect McBride to become the unquestioned focal point of West Virginia’s perimeter attack which, in turn, should lead to a very productive and more efficient season.

Speaking of efficiency, Casey Morsell was one of the most inefficient players in the country last season by any metric. He arrived in Charlottesville as a heralded recruit noted for his scoring and two-way play but never found his shooting stroke, particularly from behind the arc (17.6 percent).

However, it usually takes players a season or two to learn Tony Bennett’s packline defense (and maybe longer to fully grasp it), yet Morsell was one of Virginia’s best defenders as a freshman thanks to his size (6-3, 195 lbs) and basketball IQ. It’s not out of the realm of possibility to think he was using most of his energy on defense and was unable to carry the weight of being the expected go-to guy on offense following the departure of Ty Jerome and Kyle Guy.

He did show some flashes of what he can do with his pull-up jumper, attacking the basket, and spotting up from three (he wasn’t great creating his own shot from deep), so we know at least some of that potential is still there.

It’s also almost expected for talented wings to struggle offensively in the first year under Bennett, as each of these eventual stars can attest:

Given the skill set Morsell showed in high school, I’d expect significant progression in his offense. He won’t be the focal point of UVA’s offense (at least not immediately) with the returns of Jay Huff and Tomas Woldetensae along with transfer Sam Hauser being eligible, but that may actually open up more open opportunities for him – something he rarely had last season. Look for him to emerge as a significant impact player for the Cavaliers team that is the favorite to win the ACC.

Seton Hall was The Myles Powell Show last season (and I was here for it!) and, with him now gone, the Pirates need someone to step up and be the team’s offensive focal point.

Enter Sandro Mamukelashvili, the versatile 6-11, 240-pounder who emerged as Seton Hall’s second most-dangerous weapon a year ago. Let’s focus on that versatility because it — combined with the opportunities he’ll get as this team’s go-to player — could create nightmares for opposing coaches.

With his size, “Mamu” can effectively hang with any big man down low despite not being a true rim protector. He also has the post moves, footwork, and touch to be a real offensive threat from the block.

Yet the matchup problems come on the outside, where Mamu’s athleticism shines. He’s extremely quick for someone his size and is a gifted passer, often making plays that leave other interior players scratching their heads. His improvement as a three-point shooter (43.4 percent) also made him a much more dangerous threat.

When he put it all together, he was dominant. This was highlighted late in the year when he put up 26 points, nine rebounds, and three assists against Marquette before going for 20 points and 10 rebounds against Villanova, shooting a combined 75 percent from the field.

Mamukelashvili will have significantly more opportunities to showcase that entire skill set on a more consistent basis in his new role, and the Pirates will be counting on him to make the most of it. Expect him to be one of the best players in the Big East at the very least.

While Silvio de Sousa was the odd man out of KU’s crowded frontcourt rotation this past season, it also limited the growth of David McCormack. Udoka Azubuike got the lion’s share of minutes — as he should have — and the relative inefficiency of the offense with both on the floor kept McCormack from having anything more than a limited bench role.

That doesn’t mean the 6-10, 265-pounder was ineffective, though. In fact, considering he spent most of his minutes playing alongside Azubuike, his per 40-minute numbers stack up pretty well to the All-American.

With Azubuike gone, McCormack will be stepping into that role as the centerpiece of Bill Self’s frontcourt rotation. He has shown promising productivity on the offensive end catching lobs and in the post, as well as dominating the glass.

The Norfolk, Va., native probably won’t be the kind of elite rim-protector Azubuike was, but he has already shown enough skill to think he will excel in an expanded role. Self has also said he plans to use four perimeter players “most of the time” with only McCormack on the interior, opening the door for him to receive plenty of opportunities.

Having that large role, plus the skill set he has displayed as an underclassman, points to a bright season for McCormack when put in context of Self’s track record with big men.

In just the past decade, Kansas had six different big men named to an All-American team: Cole Aldrich, Marcus Morris, Thomas Robinson, Jeff Withey, Perry Ellis, and Azubuike. This doesn’t even include Joel Embiid who has been the best NBA player of the group. McCormack is also the 11th McDonald’s All-American frontcourt player to suit up for Bill Self at Kansas and, of those previous 10, five were All-Americans and another was an all-conference performer.

All signs point to McCormack being the next dominant big in Lawrence.