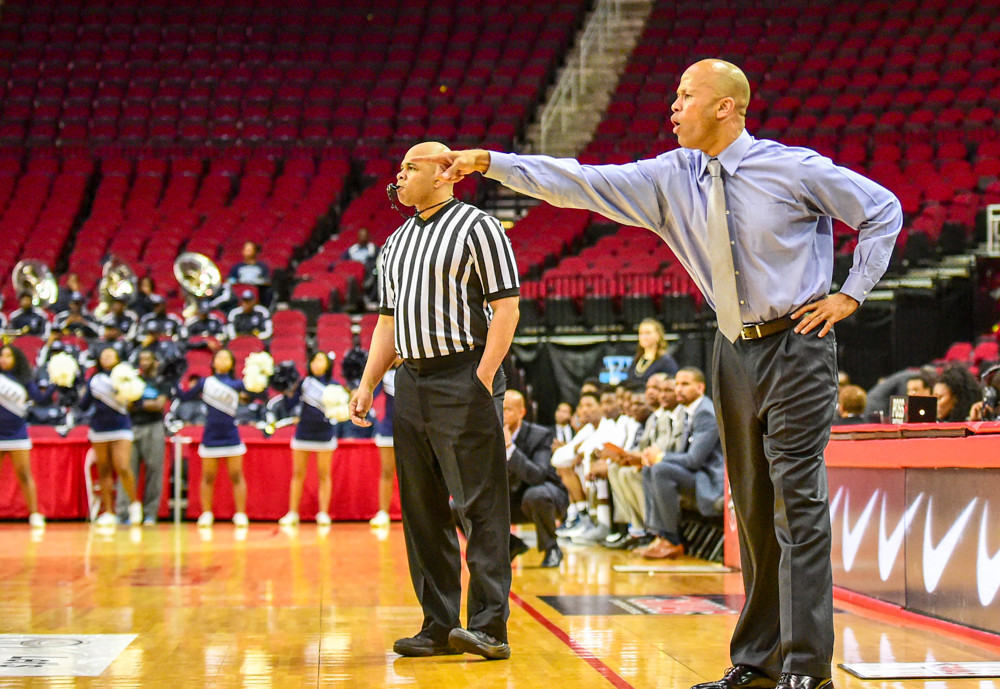 Transitioning to Division-I in 1980, PVAMU won no more than six games in its first eight seasons. The Panthers notched their first March Madness appearance in 1998, stunning the SWAC tournament field as a No. 7 seed. But after a 58-point drubbing against top-seeded Kansas, Prairie View fell back towards the bottom of the league.

The constant peaks and troughs are familiar for History Black Colleges and Universities (HBCUs). College basketball’s predominant HBCU conferences — the MEAC and SWAC — have the least funding in the sport and, as a result, struggle to maintain consistency.

Meet Byron Smith, who is looking to keep the Panthers atop the SWAC. Entering his fifth full year with the Panthers, Smith has already manufactured two of the best seasons in program history. Smith’s senior-heavy roster nearly ran the SWAC table in 2019 with a 17-1 league record and notched a March Madness bid. PVAMU followed it up with a second consecutive SWAC regular-season championship in March before COVID-19 shut down the season.

Only once has a SWAC program captured three consecutive outright regular-season titles. If Smith’s team is able to pull it off this season, it would be a massive feat. PVAMU will lean almost entirely on newcomers this season, which could prove to be a challenge given the unusual offseason.

“Over the spring we lost quite a few guys,” Smith said earlier this month. “(The team) hasn’t had a chance to work with (strength and conditioning coach Nathaniel Leonard) yet because we’ve been shut down but he’s been sending them information.”

According to barttorvik.com, the Panthers will have the least returning production in the SWAC. Just 25.3 percent of the team’s total minutes from ’19-20 are set to return this season. It will be one of the lowest percentages among SWAC regular-season winners over the past decade.

The canceled postseason had a lasting impact on several programs, and it was especially the case for Prairie View. Seniors made up the squad’s top five scorers, including swingman Gerard Andrus (15.4 ppg, 5.5 rpg) and forward Devonte Patterson (15.8 ppg, 6.4 rpg). Guards Darius Williams, Antoine Lester and Chancellor Ellis also combined to average 25.6 points per game before the season was cut short.

But instead of looking back on what could have been, Smith and the Panthers are eyeing the future.

The 2020-21 PVAMU roster is loaded with promising newcomers. According to Verbal Commits, Smith’s staff landed six transfers in the spring. Nebraska’s Cam Mack, who averaged 12 points and 6.4 assists per game this past season, is the prized addition. Mack is expected to sit out this season due to transfer rules but will be an immediate impact in the league once eligibile.

Damari Parris is set to join the squad as a grad transfer. Parris began his D-I career at Western Kentucky before transferring to Eastern Michigan. With EMU, Parris started 11 of his 20 appearances, scoring nine points apiece in games at Duke and Kansas.

Parris figures to team up with junior guard Faite Williams in the PVAMU backcourt. Williams is the team’s leading returning scorer and should help ease the program’s transition through his ability to distribute and get to the free-throw line.

Defense should remain the team’s calling card. Smith, who was the head coach of the Harlem Globetrotters back in 2002, uses a hard-nosed defensive approach to grind out victories.

As a result, PVAMU is one of the just two teams (Kansas State) to rank in the top 25 nationally in defensive turnover rate in each of the past four years. Though PVAMU consistently sends opponents to the free-throw line as much as any team in the country, the defensive physicality and up-tempo approach wear out opponents.