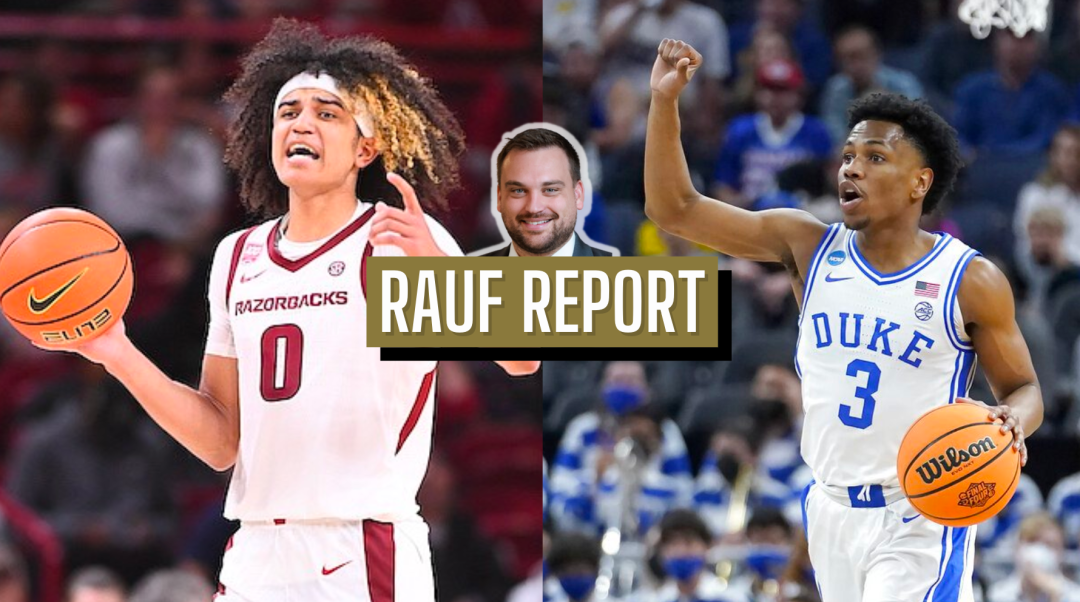 Rauf Report: Duke’s most important player, no concern about Houston and more

A look at Duke’s most important player and why you shouldn’t worry about Houston’s loss to Temple highlight the Rauf Report.

The No. 1 ranking in the AP poll changed hands for the fourth time this season on Monday, with Purdue claiming the top spot following Houston’s surprising 56-55 home loss to Temple on Sunday.

For as much as we’ve talked about the parity in college basketball this season and the lack of truly great teams, the AP poll hasn’t reflected the same notion. Since preseason selection UNC relinquished the top spot, only Houston and Purdue have held that ranking.

And while the Cougars aren’t in the top spot anymore, Houston’s loss to the Owls shouldn’t be a cause for panic. We’ll start this Rauf Report with a look at why Houston is still dangerous as ever.

Why you shouldn’t change your opinion about Houston

The old adage about the NBA is that it’s a “make-or-miss league.” Well, that’s also true about all levels of basketball. Sometimes, shots just don’t fall. That’s exactly what happened in Houston’s loss to Temple.

Prior to Sunday’s loss, Kelvin Sampson’s squad was averaging 76.2 points per game on 47.1 percent shooting and 35.7 percent from three. They had posted an adjusted offensive efficiency rating of 107.6 or higher in all but two games, per Torvik.

Against Temple, the Cougars only shot 33.9 percent from the field and posted an AdjO rating of 90.4, their second lowest of the season. They also shot just 11-of-21 on free throws. Their inability to make a shot was perfectly encapsulated in this final sequence.

“We had a bad day, but we still have a good team,” Sampson said postgame. “All of our dreams and goals are still ahead of us.”

Houston’s defense was as good as expected, limiting Temple to 31.1 percent shooting and only 14 made baskets. It forced nearly twice as many turnovers (13) as it had (seven) and won the rebounding battle. It was just the simple matter of the Cougars not being able to convert good looks into points.

I fully expect Houston to bounce back this week with UCF and Cincinnati on deck.

Jeremy Roach continues to be Duke’s most important player

I’ve written about Duke’s backcourt a few times this season, starting with an early observation about Roach’s leadership followed with a look at how the rest of the guards were struggling when Roach was limited with a toe injury.

He originally suffered that injury against Purdue in the Phil Knight Invitational but didn’t miss any time until after the Blue Devils beat Iowa in the Jimmy V Classic. That started a stretch in which he missed four of seven games, the last of which was Duke’s loss to Clemson two weekends ago.

This past weekend, he returned against Miami and immediately made his presence felt. Roach finished with 14 points and four assists in 27 minutes, including a number of key shots and steals down the stretch.

“I think the game really came down to Jeremy Roach coming in and taking over the team,” Miami head coach Jim Larranaga told Heat Check CBB after Duke’s 68-66 victory over the Canes. “I wish we would’ve played them last week [when Roach was out].”

“He brought a calming energy to us today,” Duke senior Jacob Grandison said of Roach postgame. “He took the pressure off us when it came to scoring and ball handling. I thought it was a little bit good for us to let him heal his foot and let us figure out our team without him, challenge ourselves, and now we’ve got him back and, hopefully, he stays healthy.”

That impact reveals itself all over the court. Here’s a look at Duke’s metrics when Roach has been healthy compared to the seven-game stretch in which the toe injury bothered him:

It’s clear that Roach has become the heartbeat of this Blue Devils team on both ends of the floor. Everything flows better when he’s involved. Consequently, everything feels labored when he’s not. Duke will go as far as Roach takes them.

Vincent Iwuchukwu is the key to unlocking USC

Arizona’s victory over UCLA on Saturday was the game of the weekend in the Pac-12 and the matchup that was thought to have the greatest implications on both the league’s title race and pecking order, both within conference play and nationally.

But USC’s win over Arizona State shouldn’t be overlooked. It’s not just that the Trojans won handily over a solid Sun Devils team, allowing them to keep pace with Arizona and ASU in the league standings — it’s how they won.

Or, more specifically, who contributed.

Five-star center Vincent Iwuchukwu played his first impactful minutes of the season on Saturday as he makes his way back to full strength. The 7-footer suffered cardiac arrest in a July workout and was hospitalized, putting not just his season but playing career in doubt.

He made his return two weeks ago against Colorado and played a decent amount against Arizona on Thursday. However, he announced his arrival against the Sun Devils, finishing with 12 points and five rebounds in just 14 minutes.

This is welcomed news for a USC team that has really struggled inside without him. That’s not necessarily a surprise — this team was built with a healthy Iwuchukwu in mind.

The freshman’s explosiveness and length have immediately had an impact on the glass, an area where the Trojans have been particularly poor. Iwuchukwu has also added depth, which is another needed lift for a team ranked 325th nationally in bench minutes.

If Iwuchukwu continues playing at this level — and he should get stronger the more he plays — the Trojans should improve from a very flawed bubble team to at least the clear No. 3 squad in the Pac-12 that doesn’t have to sweat on Selection Sunday. That’s the kind of impact he had on Saturday and will be something to monitor moving forward.

Is Arkansas starting its annual turnaround?

Every January since Eric Musselman became the head coach at Arkansas, we have wondered what’s wrong with the team and why the Razorbacks aren’t living up to expectations. And shortly thereafter every year, they rip off a hot streak to close the season.

This team appears to be following a similar script. Here’s a breakdown of how Musselman’s first three and a half years in Fayetteville have unfolded:

It all feels so familiar, doesn’t it?

Now, there is reason to believe this season may be different. Starting big man Trevon Brazile tore his ACL in early December and will be out for the rest of the season, leaving the Razorbacks shorthanded inside. Freshman point guard and projected lottery pick Nick Smith has also been out with a knee injury after playing in just five games this season.

On the flip side, Smith is expected to return in a few weeks, which would obviously be a huge boost. Freshmen Anthony Black and Jordan Walsh have been stepping their respective games up recently, too.

Musselman tends to have his teams playing their best in March, and history tells us the turnaround happens now. Saturday’s win over Ole Miss may have been the start, and Smith’s potential return would only accelerate things.

Texas Tech’s struggles have been one of the biggest surprises of the 2023 calendar year. The Red Raiders — projected to finish in the top half of the league by most outlets — fell to 0-7 in Big 12 play following Saturday’s loss to Kansas State, putting them dead last in league play.

The discourse has largely been casting the Red Raiders as the unfortunate victim of the nation’s best conference, part of which is true. Five of the seven losses have come by seven points or fewer, including three that were decided by a single possession or in overtime.

At the same time, the Red Raiders quietly haven’t performed well at all throughout the season. They have now lost all nine games this season against the NET top 140 and KenPom top 150. Unsurprisingly. that also puts them 0-9 against in Quad 1 and Quad 2 games. In fact, Mark Adams’ squad is just 2-9 in games against the top three quadrants.

That’s not going to get things done. Essentially, this team has eight wins against the bottom feeders in college basketball and has a hard time beating anyone else. Those two Quad 3 wins by the way? Those are against Louisiana Tech and Eastern Washington — not exactly powerhouses.

The Big 12 doesn’t exactly allow for “off weeks” during the season, but Texas Tech is heading into the easiest week it has for the rest of the season. On Wednesday, the Red Raiders will host West Virginia — which is just 1-6 in league play — before traveling to face LSU (118th in KenPom) as part of the Big 12/SEC Challenge.

If Texas Tech can’t get things turned around this week, we can pretty much write off the rest of its season.