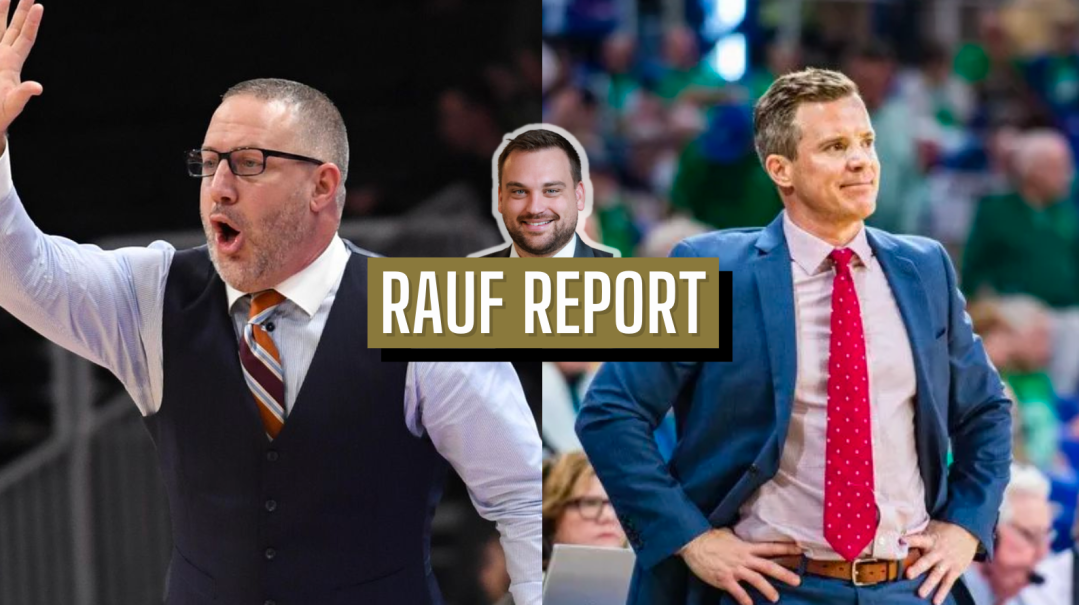 The Rauf Report breaks down the biggest college basketball takeaways of the week, headlined by Texas A&M, UConn and more.

The more this college basketball season progresses, the more it looks eerily similar to the chaotic 2010-11 season.

It’s starts with the lack of great teams at the top of the sport, opening the door for a single player to lead their team on a Kemba Walker-type run through the NCAA Tournament. Kemba, of course, led UConn to the 2011 national championship.

Eleven ranked teams lost this past Saturday, tying the record for most losses in a single day by ranked teams in AP poll history. It only happened one other time — in 2011.

Coincidentally, 2011 is also the last time there were this many “huge” upsets, as Will Warren points out:

So, yes, the season really has been as historically crazy as it feels. March may be more about who gets hot at the right time as opposed to the overall strength of the best teams.

That’s something Texas A&M has experienced recently. The Aggies were just 6-5 following a loss to Wofford back in mid-December and it looked like Buzz Williams’ squad was headed towards a lost season. Instead, Texas A&M has won seven games in a row and is tied for first in the SEC with Alabama. How has that happened, and how seriously should we take the Aggies?

Historically, Williams’ teams play high-level defense. His Marquette teams posted a top-65 defense, per KenPom’s adjusted defensive efficiency metric, in each of his six seasons there. Virginia Tech — which was more of a rebuild — was top-70 in three of his five seasons, and he had Texas A&M up to No. 30 in that category last season.

It was very easy to blame the offense when the Aggies were going through those struggles early in the season. This team can be frustrating to watch because they don’t really have any shooters (266th in 3-point percentage) and their offensive sets can be extremely clunky. Their best offense is typically an offensive rebound, something they do at a high rate, ranking eighth nationally.

Could the offense have been better? Heck, could it still be better? Absolutely.

But when the team’s calling card comes up flat, everything suffers. That’s the root of Texas A&M’s early struggles. But a return to elite defense is the spark of this turnaround. Just take a look at what the Aggies have done since the Wofford loss:

Those numbers may be slightly inflated given that five of those seven games have come at home and four have come against teams that currently rank outside the KenPom top 100.

We’ll find out how legitimate this turnaround is over the next two weeks. The Aggies face Kentucky, Auburn and Arkansas before the calendar flips to February — and all three games come on the road. That stretch starts Saturday against the Wildcats at Rupp Arena.

While Texas A&M has upped its game defensively, the opposite is true of UConn, and it’s the biggest reason why the Huskies have struggled this month.

The Huskies are another defense-first team and have been since Dan Hurley took over as head coach. Their surprising slide — going 1-5 in their last six games after a 14-0 start — has left many puzzled.

Put simply, UConn’s defense has declined considerably. After allowing only one team to score at least 70 points during the 14-0 stretch (Georgetown, of all teams), four teams have crossed that mark in the last six games. Three – Xavier, Marquette and St. John’s — have scored at least 82 points.

There are other reasons why UConn has struggled, too. Adama Sanogo and Donovan Clingan haven’t been as dominant inside and guards have been turning the ball over a lot. But the defensive slippage is the biggest reason for the slide and is the key to ending the drought.

The Huskies aren’t the first team to go through a mid-season lull and they certainly won’t be the last. Four of the past six games have been on a road and they’ll get all those teams at home coming up. That will certainly help, but the defense has to tighten up.

Could UCF play spoiler in the American?

We thought the American would be a two-team race at the start of the season with Houston as the clear No. 1 and Memphis as the steady No. 2.

Houston has handled their business with a 6-0 start and has a two-game lead over the rest of the league in the loss column. Memphis is right there with a 4-2 mark, but the Tigers are one of five teams in the AAC that is either 5-2 or 4-2 in league play.

One of those teams is UCF, which has been quietly playing high-level basketball all season long. The Knights already have four wins against the top two quadrants, one of which came last week at home against Memphis. UCF also knocked off Oklahoma State on a neutral court and beat Ole Miss in Oxford.

Its losses haven’t been bad, either. While two-point losses to Miami and Missouri and a six-point loss at Houston may feel like missed opportunities for the Knights, the performances also show their capability of playing with some of the best teams in the country. Removing their season-opening double overtime loss to UNC Asheville, the Knights rank No. 26 in the country, according to T-Rank, sandwiched right between Gonzaga and Arkansas.

UCF looks the part, too. It’s the tallest team in the American, shoots the three well and employs a top-30 defense. It has also already played Houston and Memphis once, meaning the Knights are in second in the league with one of the easier conference schedules remaining.

It will be one of the biggest upsets ever if Houston doesn’t win the American. But UCF is making a solid case to potentially be the second-best team in the league, placing itself in position for an at-large berth.

Speaking of at-large berths, there has been some talk about A10 favorites Dayton and VCU getting back into the mix. The two are tied for first in the A10 alongside Saint Louis thanks to hot streaks that came on the heels of rough starts to the season.

But context of wins and losses matter, and the context spells a picture of teams handling their business against the worst teams in the sport while struggling against everyone else.

The resumes for these teams are much weaker than what appears at initial glance. Both Dayton and VCU will likely have to win the A10 Tournament to make the NCAA Tournament.

Charleston has emerged as this season’s mid-major darling, rising to No. 18 in the most recent AP poll thanks to a 20-1 record that includes early-season wins over Virginia Tech and Kent State. The Cougars haven’t always looked the part – trailing a one-win Monmouth team at halftime on Thursday – but have taken care of business.

However, Florida Atlantic is a much stronger and much more proven mid-major that should be receiving as much publicity. The Owls did move into the AP Top 25 for the first time in program history this week, and our Eli Boettger detailed the team’s surprising season in a recent HC+ feature.

Looking closer at the metrics, FAU has a better resume than Charleston in seemingly every category outside the AP poll.

Pat Kelsey has done a phenomenal job there in just his second season and Charleston will be a dangerous group in the NCAA Tournament. But despite lesser national coverage to this point, Dusty May’s FAU squad could be even more dangerous come March and is in line to get a higher seed.

Don’t gloss over FAU when discussing the nation’s best mid-majors. The Owls deserve the attention.