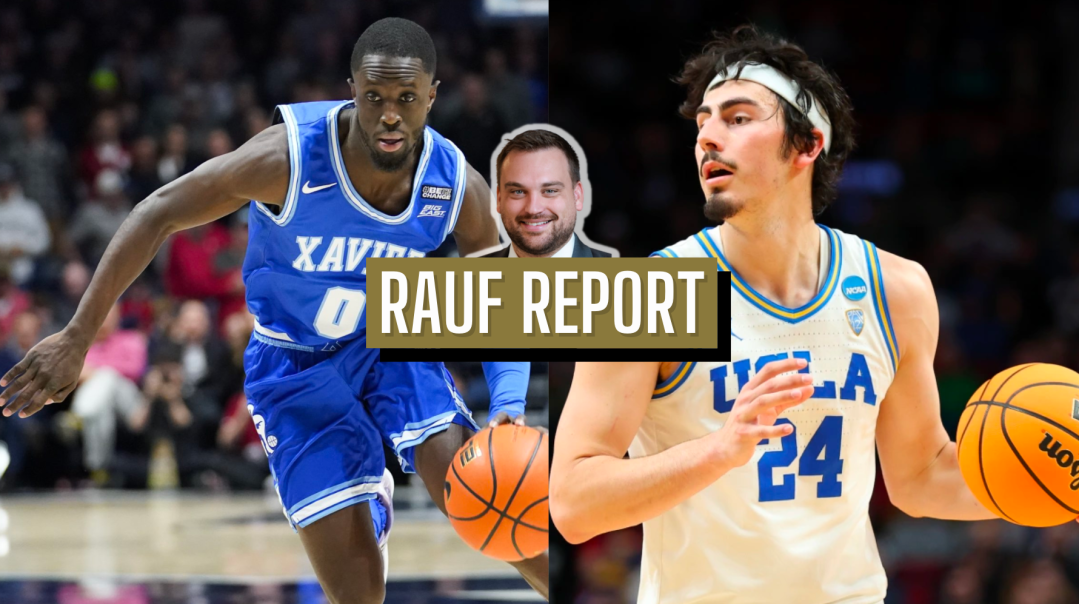 The Rauf Report looks at the biggest college basketball takeaways from the weekend, including a look at two surprising conference leaders.

I’ve talked at length about the parity in college basketball this season. There are no dominant or elite teams like we’ve seen in past years, a situation which lends itself to a lot of upsets and an incredibly fun NCAA Tournament.

This weekend was historic in that regard.

Eleven ranked teams lost on Saturday, nine of them to unranked foes. That was the most losses in a single day by ranked teams in AP poll history, tying a record set back in 2011. (If you remember, that season concluded with an insanely fun NCAA Tournament won by Kemba Walker and UConn.)

Two more ranked teams lost on Sunday, bringing the total number of casualties to 13 — meaning more than half of the teams ranked in the AP poll suffered a defeat in the last two days.

That list looked like it was going to grow to 14 given how UCLA struggled with Colorado for 30 minutes, yet the Bruins turned it on when needed and ultimately came away with a 14-point victory over the Buffs. We’ll start this Rauf Report with a look at how Mick Cronin’s squad pulled that off.

UCLA is one of few teams that can flip a switch

With 10:21 left in the game, Colorado took a 44-35 lead over UCLA that felt much larger than that. The Bruins were really struggling offensively and were 1-for-16 from 3-point range. It looked like it just wasn’t their night.

“You’ve just got to keep battling, regardless of if things go your way,” Cronin told reporters postgame. “You’ve got to make them go your way.”

UCLA did that on the defensive end from that point on. Adem Bona’s and-one started a 17-0 run that completely turned the game on its head, eventually putting the Bruins ahead for good. The defense held Colorado without a basket from that 10:21 mark until there were just 45 seconds left and the game had already been decided.

“You can’t be offensive sensitive, and we were for a little while, that’s why we got down nine,” Cronin said. “We were pouting because the ball wasn’t going in, and we stopped worrying about that. We started worrying about getting stops and rebounding.”

That late run and defensive display is just the latest example of this UCLA team being able to flip the proverbial switch and “turn it on” when necessary. The Bruins did so late against USC after blowing a sizable lead, preserving the victory. They closed on a 14-3 run against Washington State to grab a one-point win, and they ripped off a 21-9 run to end the game against Oregon, turning a three-point deficit into a nine-point victory.

Few teams in the country have shown this ability to elevate their collective level of play at the drop of a hat. Heck, it’s one of the reasons why we’ve seen so many upsets. But UCLA has demonstrated this skill time and time again, which really shouldn’t be a surprise given how many big games its core has played it. This never-say-die demeanor should bode extremely well for them in March.

We figured UCLA may be running away with the Pac-12 at this point, especially given the way Arizona and Oregon have struggled to 4-3 records in conference play. However, the Bruins hold just a one-game lead because Arizona State is sitting there at 15-3 overall, with a 6-1 league record.

The Sun Devils have two of the most puzzling losses in the country — an overtime loss to Texas Southern and a 37-point defeat at the hands of San Francisco — but ASU has pretty much handled their business aside from that. Convincing road victories over Oregon and Oregon State over the last few days have helped Bobby Hurley’s squad put some distance between them and other contenders in the conference.

Arizona State’s guard-heavy attack puts immense pressure on opposing defenses. Typically, the Sun Devils have four capable ball-handlers and shot creators on the court at the same time, which stretches those defenses all the way out to the perimeter even without a number of knockdown shooters. Those four starting guards are all averaging between 10.9 and 12.1 points per game, and three of them average over two assists per game. That kind of balance is tough to deal with for any opponent.

However, ASU has really won games because of its defense. Seven-foot Nevada transfer Warren Washington has been a revelation inside, averaging two blocks per game and ranking 26th nationally in block rate. The Sun Devils are currently top-20 in the country in block rate, allowed effective field goal percentage and 2-point defense, largely because of the way Washington and freshman Duke Brennan serve as deterrents at the rim.

That allows those guards to be more aggressive on the perimeter, where they’re taking full advantage. Arizona State leads the Pac-12 in steal rate and has forced double-digit turnovers in each of the past seven games, including 16 against Oregon State on Saturday.

The Sun Devils certainly look like an NCAA Tournament team. Looking at the teams with the “most similar resumes” to this Arizona State squad, per Bart Torvik’s website, all of them made the Big Dance. Two of the three most similar — 2012 Cincinnati and last season’s Providence team — reached the Sweet 16.

It remains to be seen if Bobby Hurley’s squad can take it that far, and this week’s schedule will provide the toughest tests yet, when Arizona State hosts UCLA on Thursday and USC on Saturday. We’ll find out just how good these Sun Devils are.

The good and bad about Xavier

Let’s start with the good for Xavier because the Musketeers are rolling right now. They hold the nation’s fourth-longest winning streak at 11 games — dating back to Thanksgiving weekend! — and currently sit alone atop the Big East standings with a perfect 7-0 mark in conference play.

Sean Miller’s squad has already beaten many of the league’s top teams, too, with victories over UConn, Creighton and Marquette in hand.

Stellar offense has been the key behind the surge. Xavier currently ranks fifth nationally in adjusted offensive efficiency, per KenPom, and is one of just six teams shooting over 40 percent on 3-pointers. In fact, the Musketeers are the only power conference team shooting above 39.5 percent from deep, edging out Penn State.

All five starters are averaging double digits as well, led by UTEP transfer Souley Boum, who is averaging 17.7 points and 4.9 assists per game. His ability to break opposing defenses down off the dribble has opened up this offensive attack, and he has become the go-to guy for Miller with the game on the line.

Defensively, though, Xavier hasn’t been great. The Musketeers rank just 91st in KenPom’s adjusted defensive efficiency metric, the lowest of anyone in the Big East with at least three conference wins (apologies to Villanova, DePaul and Georgetown). Their offense has carried them in almost all these big wins — but each has also come at home, where Xavier’s defense is at its best.

Essentially, this defense doesn’t travel. The recent home wins are nice, but those road defensive struggles caused the Musketeers to be in a tight game with Georgetown late, and they nearly cost them against St. John’s, too.

Winning on the road is the toughest thing to do in college basketball, so I’m not knocking Xavier for being able to take care of business. But there is no denying that the level of play defensively has been considerably lower away from the Cintas Center, which may be costly when the Musketeers start facing better teams in enemy territory.

The road tests are coming. Seven of their remaining 13 games are on the road, five of which are against teams in the top half of the conference. Xavier’s ability to win the conference will depend on how its defense plays in those games.

ACC is Clemson’s to lose

Of these three conference leaders we’re talking about, no one has set themselves up better than Clemson.

The Tigers are 7-0 in ACC play after beating Duke on Saturday, the latest in a line of quality wins for Brad Brownell’s squad. They now hold a two-game lead in the league standings — and of the five teams tied at 5-2, Clemson already has wins over two of them (Pitt and Wake Forest).

Clemson’s remaining schedule sets itself up well for a strong close to the season, too. The Tigers don’t face Duke again and are only slated to play Miami, UNC and Virginia — three of the league’s best teams — once apiece. In fact, seven of their remaining 13 games are against teams with sub-.500 conference records, and of that group, only Virginia Tech has a winning overall record this season.

This isn’t to say that the Tigers haven’t been good — because they has been! Clemson has been the ACC’s best defense in conference play, leading the league in defensive efficiency and effective field goal percentage allowed. Strong interior defense has played a major role in that.

On offense, this team is balanced and efficient. Five players average at least 9.8 points per game, and five are shooting at least 40 percent on 3-pointers. Hunter Tyson (15.7 ppg, 9.8 rpg) has emerged as a double-double machine, while PJ Hall still shows flashes of being one of the ACC’s best bigs (26 points against Duke).

A founding member of the ACC in 1953, Clemson has only won one regular-season title in its history, all the way back in 1990. Everything appears to be set up for the Tigers to finally win a second in 2023.

Colorado State has not had a year to remember. After earning a No. 6 seed in last season’s NCAA Tournament, the Rams entered this past weekend with a 9-9 overall record and 1-4 mark in Mountain West play after a disappointing loss to Air Force.

But this team still has one of the nation’s best point guards, and Isaiah Stevens reminded everyone of that in Saturday’s 82-81 victory over UNLV.

The senior finished with 33 points, nine assists and eight rebounds. He also hit the two biggest shots of the game — one that forced overtime and one that proved to be the game-winner.

“I think that’s the best performance he’s ever had here, and he’s had some great ones,” head coach Niko Medved said postgame. “Just willed us to victory.”

Stevens missed the first seven games of the season with a foot injury, and while he has scored in double figures in each game he has played, he hasn’t always looked like himself. He certainly looked healthy against the Rebels, though. Stevens gives Colorado State perhaps the best player in the Mountain West, which makes the Rams a wild card during the final eight weeks of the season.