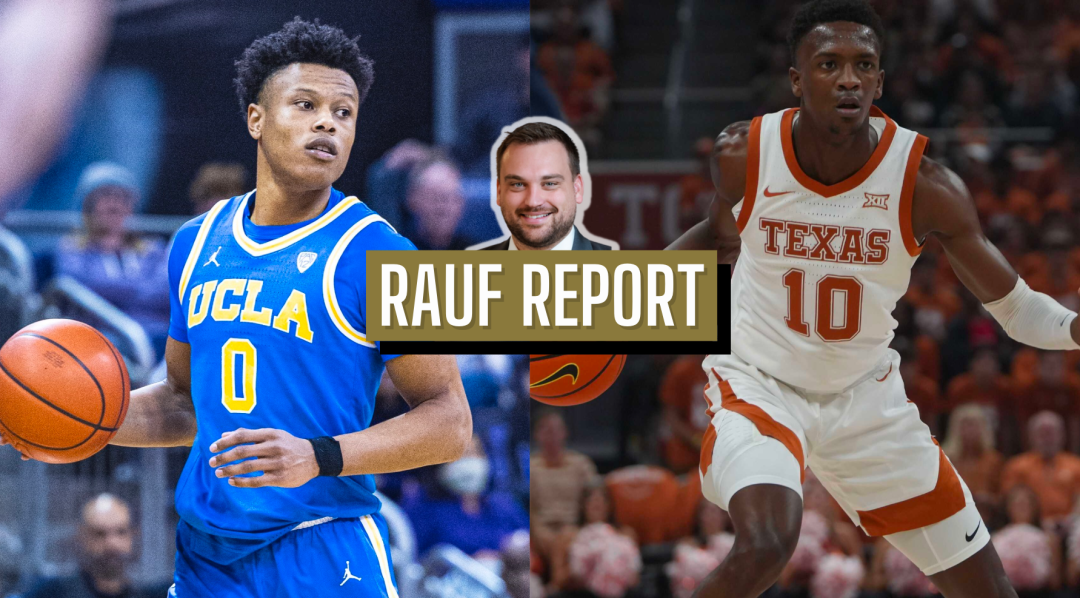 The Rauf Report highlights the biggest takeaways of the week in college basketball, including a look at why Indiana is struggling of late.

It feels like we’ve settled into conference play across the college basketball landscape. While it hasn’t yet brought a litany of upsets, many ranked teams found themselves in tougher-than-expected contests this week.

We still have a while to go before March, but I feel confident saying there won’t be many 65-7-type results in March Madness.

The elite teams at the top of the sport have yet to separate or identify themselves, yet a handful of expected contenders are fading out of the picture.

No team is fading faster than Indiana right now. The Hoosiers are just 3-6 in their last nine games and are tied for last in the Big Ten with a 1-4 record.

What has happened to Indiana, and how does it get back on track? That’s where we’ll start this Rauf Report.

Why Indiana is struggling defensively

That’s certainly a blow for Indiana. But, quite frankly, its defense is making things worse, and it has little to do with the absences of Johnson and Thompson — largely because its defensive issues started when those two were still healthy.

When the Hoosiers beat UNC in the ACC-Big Ten Challenge on November 30, they were ranked in the top 10 and looked like the Big Ten favorites. That version is nothing like the current team.

It started with blowout losses to Rutgers, Arizona and Kansas, games in which IU had its full complement of players; Johnson suffered his injury against the Jayhawks, but Kansas was already dominating at that point. Poor defense was the cause in those cases, just as it has been during Indiana’s current three-game losing streak.

Defensive rotations are slow and a lack of depth and athleticism on the perimeter is getting exposed, all of which is exasperated by a defensive scheme that doesn’t play to Indiana’s strengths.

During the 7-0 start, the Hoosiers were playing well defensively. They were forcing turnovers — 54th in defensive turnover rate in November — and defending the 3-point line at a solid clip, ranking 67th in that category.

But once the schedule ramped up, the Hoosiers dropped off drastically in these areas. IU ranks 311th and 342nd nationally in those two categories, respectfully, since the calendar turned to December.

The impact of those struggles — forcing turnovers and 3-point defense — has been obvious. Five of Indiana’s last seven opponents have scored at least 84 points. Four teams have made 10 3-pointers against the Hoosiers during this stretch, including a Penn State team that made 18 shots from behind the arc on Wednesday. For context, Indiana has made 10 threes in a game just four times all season.

While getting Johnson and Thompson back would obviously provide a nice boost. At the same time, blaming recent struggles extend beyond player availability. The Hoosiers have significant defensive issues that need to be fixed before the season spirals out of control.

Let’s play a little game: Which player is having the better season?

Player A is Johnny Juzang last season for UCLA. Player B is Jaylen Clark this season, who stepped into UCLA’s starting lineup to replace Juzang after he left for the NBA Draft.

Juzang’s departure is a big reason why there wasn’t as much Bruins hype entering the season as last year. He was a superstar that could consistently create his own shot and often showed up in the big moments when UCLA needed baskets.

Clark’s emergence has elevated the Bruins. He is not the same kind of shot-creator like Juzang, but he has been incredibly efficient this season while doing significantly more on the defensive end. His play has been a big reason why UCLA hasn’t lost since November.

Clark’s two-way impact is perfectly summarized on this play against Utah. He comes up with the steal on one end, starts a fast break, then runs the court and finishes at the other end once he gets the ball back.

The junior has also proven capable of stepping up in big moments, too! He hit the shot in the closing seconds against USC last week that ultimately gave the Bruins the win.

Clark’s play should cause us to pay more attention to this UCLA team. Keep in mind that the core of this group played in the Final Four two years ago and made it to the Sweet 16 last season. A few late jumpers from UNC’s Caleb Love were likely the only thing keeping the Bruins from back-to-back Final Four appearances.

Juzang was obviously a key part to those teams, yet Clark has helped the program maintain that same level of play. If he keeps producing at this clip, the Bruins will be poised for another long March run.

Much like UCLA had to deal with the question of replacing Juzang in the offseason, Kansas had to deal with replacing David McCormack inside. There were obvious candidates to step in for Ochai Agbaji on the wing but there appeared to be a huge hole in the middle — an area where the Jayhawks have traditionally been elite under Bill Self.

Freshman Ernest Udeh might turn into that next star Kansas big, but it’s been clear he’s not ready to contribute high-level minutes yet. That forced Self to go small and put 6-7 sophomore KJ Adams at center for the Jayhawks.

It’s a move he may have thought was temporary at the time but Adams’ two-way impact has cemented his place as an indispensable part of the rotation.

Despite his lack of size, Adams’ elite athleticism and strength have allowed him to be a defensive force at the rim. He’s top 10 in the Big 12 in block rate and among the conference leaders in rebounding. His quickness and ability to switch onto and adequately defend perimeter players has improved Kansas defensively, too. That’s really all Self and the Jayhawks need from him given how Gradey Dick and Jalen Wilson have contributed offensively.

Yet Adams has emerged as a reliable offensive threat, too. He didn’t score more than eight points in any of KU’s first seven games of the season. In the nine games since, Adams has scored in double figures in every single game. Kansas has realized the weapon he can be, too, as he currently ranks top 10 in the Big 12 in usage and effective field goal percentage.

Tuesday’s victory over Oklahoma was Adams’ official coming out party. He scored a career-high 22 points on a career-high 13 shot attempts with six rebounds and two blocks. Dick and Wilson struggled mightily, combining to shoot 4-of-20 from the field, so Adams stepped up and carried Kansas to a victory.

Adams may never become the kind of player who creates his own shot. He doesn’t have to be, though. Adams runs the floor well, has become lethal in the pick-and-roll, and his athleticism makes him a constant rim threat. Adams has added an explosive element to KU’s attack while filling the biggest void on the roster. It’s a huge reason why the Jayhawks might be looking at another Big 12 title.

Let’s stay in the Big 12 to talk Texas and Sir’Jabari Rice. The fifth-year senior and New Mexico State transfer has quietly emerged as one of the best closers in the country for the Longhorns. He’s not an obvious impact player for Texas considering he’s behind Marcus Carr and Tyrese Hunter in the rotation, but Rice is the best Longhorn late in games.

In Wednesday’s comeback victory over TCU, Rice scored all 15 of his points in the second half and came up with three huge rebounds late to seal the win.

In Texas’ one-point victory over Oklahoma on New Year’s Eve, Rice scored 11 of the Longhorns’ 17 points in the final six minutes to come back to win.

When Rice took Texas to overtime the day Chris Beard was arrested, the 6-4 guard scored nine of Texas’ final 17 points.

Rice has been a clutch player throughout his career going back to his days at New Mexico State. Texas has a lot of proverbial mouths to feed, yet there doesn’t seem to be much debate when the game is on the line — the Longhorns are going to Rice.

UMass Lowell could upset the balance of the America East

Now let’s talk about the team that is upsetting the balance of power in the mid-major ranks.

Vermont has dominated the America East over the last decade. The Catamounts have won six straight conference regular season titles and have appeared in three of the last five NCAA Tournaments. If there was a threat to them at the top of the conference, it was expected to be Bryant, which just won the NEC and has high-major talent.

Instead, it’s UMass Lowell that currently sits atop the conference after knocking off Vermont on Wednesday. The River Hawks look like they’re here to stay.

Head coach Pat Duquette’s squad is 15-3 on the season with two of the losses being an eight-point defeat at Rutgers and a two-point overtime loss at Rhode Island. They have wins over the Catamounts and UMass on their resume already, too. Lowell has one of the nation’s oldest and most experienced rosters — 24th in experience and 78th in minutes continuity — with a number of legit shooters, ranking 16th nationally in 3-point percentage.

We’re only four games into the conference season but it looks like the America East is going to run through the River Hawks.